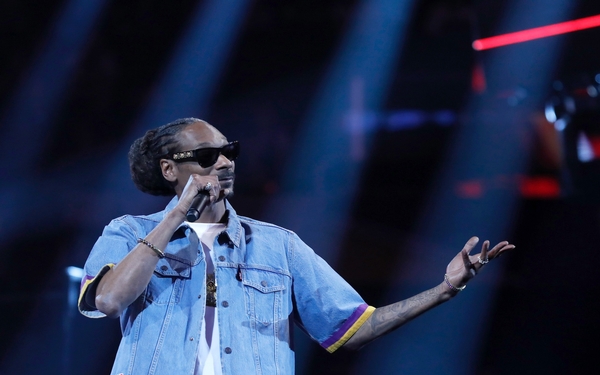 A stream of tears cascades down Snoop Dogg’s face. He takes a moment to exhale before continuing playback of his latest album, “Bible of Love.”

It’s the first time he’s previewing the project — a 32-track compilation of gospel records that arrived earlier this month — and after a few songs he’s overcome with emotion.

“A lot of times, you see me performing for thousands of people, filling their hearts with love and joy, not knowing that I’m going through so much pain,” he says on a spoken-word track midway through the record.

A stunning admission from a man who helped create the blueprint for gangsta rap. But if you think Snoop D-O Double G is ditching street edge for vulnerability, the blue ball cap he’s wearing inscribed with “Make America Crip Again” says otherwise.

And therein lie the virtuosity and complexity of the artist born Cordozar Calvin Broadus Jr., a performer who has reinvented himself perhaps more than any other pop star.

In the quarter-century since his groundbreaking hip-hop debut, Broadus has built a multifaceted career that has seen him notch an impressive array of titles like corporate pitchman, tech mogul, TV personality, actor, adult film auteur, cannabis investor, football coach and DJ.

Now he’s adding gospel artist to an unparalleled list of accomplishments that recently include a hit cooking show with Martha Stewart, reviving ‘70s game show “The Joker’s Wild” and selling a stirring docu-series about his youth football league to Netflix.

“Bible of Love,” the first release from All the Time Entertainment, an imprint Broadus launched to provide more opportunities for inspirational artists, is surprising — even for Snoop.

While a collection of spiritual uplift from the rapper behind classics such as “Gin and Juice,” “Ain’t No Fun (If the Homies Can’t Have None),” “Drop It Like It’s Hot” and “Sexual Eruption” sounds like an obvious PR ploy, the album can also be looked at as more proof of how far Broadus has evolved.

“Musically I’ve always had references or had gospel in my music but never able to do a whole project because the scenario was never right. The label wasn’t right, the timing wasn’t right,” he says. “I wanted to do something with a great message.

“There’s so much hate in the world right now, I want to show love. I want people’s spirits to be full of joy. When I listen to this record, I’m fulfilled. I’m complete.”

We are deep inside the 20,000-square-foot fortress in Inglewood known as the Compound, where Broadus lives and breathes the many facets of his constantly evolving brand.

In the parking lot, which can also double as a drive-in theater, rests a collection of classic cars and the school bus used for transporting the kids in his Snoop Youth Football League, now the largest youth football organization in Southern California (and the subject of “Coach Snoop,” his aforementioned Netflix series).

There’s a full-size basketball court, game room, casino, soundstage and a trio of recording studios — all of which are adorned with collectibles from the entertainer’s storied career, portraits of his family and tributes to his fallen rap brothers (Tupac Shakur, Eazy-E, Nate Dogg).

On a recent afternoon the sounds of classic soul records echoed throughout the Compound. Broadus enters the Mothership — the largest of his recording studios and the place he spends much of his time — with every bit the genial, impish charm that has made him so engrossing to watch. Before sitting down for the interview, he’s grooving to a Johnnie Taylor song from the ‘70s that no one seems to know as well as he does.

At 46, Broadus has spent most of his life performing. He’s had a remarkable longevity many in hip-hop have never seen, and while emcees his age have slowed down or turned their attention to other endeavors, Broadus is still as hungry as ever.

“Now that I’m in the latter stages of my career, I’m able to pick and choose and do what I want, as opposed to being told what to do,” he says, crediting his connection to youths as a source of motivation.

In just the past year he’s dropped multiple music projects, including a surprise EP, “220,” his 15th studio album, “Neva Left,” and “Make America Crip Again,” which gleaned its provoking title from President Trump’s divisive campaign slogan and the Crips’ origins as a black nationalist organization.

“There is a Korean proverb which says, ‘Success is not final, failure is not fatal; it is the courage to continue that counts.’ Snoop’s unwavering nature to be culturally genuine and prophetically honest embodies the ideology of the American dream,” explains Ted Chung, Broadus’ manager of nearly 20 years.

Work began early last year on “Bible of Love,” which Broadus originally conceived as a trilogy release with co-executive producer Lonny Bereal. “He gave me his heart. He felt that comfortable with trusting me, and he’s really got a big vision for what he wants to do,” Bereal says. “He may have a lot going on, but his heart is really invested in this.”

Although Broadus had mulled the idea of a gospel record for years, the 2016 death of his grandmother, Dorothy Tate, pushed him to get serious about a project.

“I’ve lost a lot of people in my life — homeboys, uncles, friends, family members. Losing her is a pain that’s still there,” Broadus says, his voice cracking with emotion. “I hear what she’s saying … the message from up top that every sunrise is a second chance.”

If anyone knows about second chances, it’s Broadus — someone whose visage once frightened middle America and outraged politicians.

Born and raised in a rough part of eastern Long Beach, he got caught up in the gangbanging and drug peddling that surged in the 1980s.

Like Ice Cube, Eazy and Dre before him, Snoop’s lyrics were lifted from the tough, violent street life he had known and made all the more real when his meteoric rise coincided with a murder charge — he was acquitted — before he went on to sell over 37 million records.

“At the beginning I was such the bad guy. People told me I’d never get an endorsement deal, or things like that,” Broadus recalls of his controversial past. “I used to be influential for the wrong reasons.

“I remember the 1994 American Music Awards, ABC told Dick Clark, ‘We don’t want him on our show because he’s a murderer,’ and he went to bat for me. He told me to make something of myself. I’ve never forgotten that.”

While his seminal rap hits continue to inform generations of rappers, Broadus has worked tirelessly to expand his reach far outside of music.

With the help of his longtime manager Chung, who co-founded multicultural marketing firm Cashmere Agency and manages Broadus under his Stampede Management imprint, the entertainer has spent the past decade becoming a multi-hyphenated mogul whose appeal seemingly knows no limits. What other rapper can market Hot Pockets, soda, online retailer Overstock or T-Mobile without losing any of his cachet?

“(Snoop’s) global appeal is a remarkable narrative that drives his music, film and TV content and permeates the pop culture and social media landscape,” Chung says. “The courage to stand up for his beliefs, even if it takes time for the world to catch up, is what makes Snoop the unique friend and individual who sets trends and transcends.”

And his non-music success speaks for itself. Over 1 million people are subscribed to his YouTube channel, Westfesttv, which airs his weekly news show, GGN (its set is housed inside the Compound); he’s landed countless endorsement deals, launched a successful mobile app and turned his lifelong affinity for cannabis into an empire that has led the charge for de-stigmatizing weed around the world.

In fact, just a few days before this interview the venture firm he co-founded, Casa Verde Capital, raised $45 million to invest in cannabis production.

Broadus has starred in or executive produced dozens of films and TV shows over the years including “The Wash,” “Baby Boy” and “Soul Plane,” but he’s looking to be a bigger player.

He’s made some strong inroads in TV — TBS recently renewed his game show “The Joker’s Wild” for a second season, “Martha & Snoop’s Potluck Dinner Party” is a hit for VH1, he’s got series in development at HBO and Starz and producer Deon Taylor recently announced his new Dark Circus production company’s first project is a Broadus-produced horror anthology titled “The Thrill” — but he wants to be the leading man on the big screen.

Snoop the leading man will have to wait for now though, as Broadus is prepping to mount a touring musical production inspired by “Bible of Love” — more proof of how committed he is to his latest act.

But will there ever be a day when the Dogg hangs it up for good? Not likely.

“Everything I do, the TV shows, movies, award shows, music, this and that — this is who I am,” he explains. What would I do without it? This is what I do, I get up and I get to it. I’m like Bruce Wayne and all the superheroes.

“Actually, I’m like the Black Panther,” he says before flashing a sly grin and sparking a thick blunt.