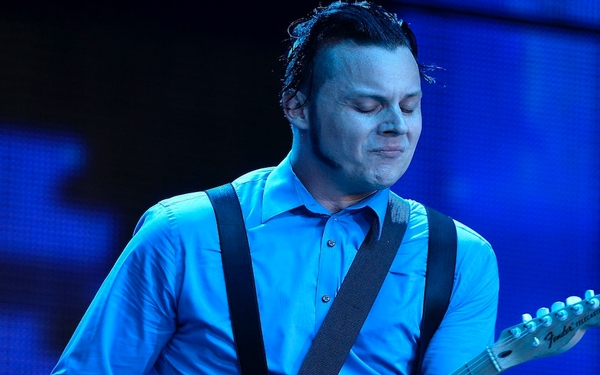 Jack White has been obsessed with the number three for as long as he can remember.

It famously animated his platinum-selling blues-punk band, the White Stripes, which he built around three instruments: voice, guitar, drums. And it’s a symbolic cornerstone of his Nashville record label, Third Man Records, where employees wear uniforms of yellow, black and white.

Given his fixation, you’d expect that if there were one thing in current pop music to excite White, it would be the so-called triplet flow popularized by hip-hop trio Migos (and emulated by countless recent rappers).

White himself would expect it. But no.

“As much as I love the number three, I don’t think the triplet cadence is that interesting,” he said of the rhyming pattern in hits such as Migos’ “Bad and Boujee” and Cardi B’s “Bodak Yellow.” “I do think it’s a cool notion.” Though he prefers a more varied, freewheeling delivery.

The real surprise here might be that White, 42, is paying enough attention to hip-hop to have an opinion.

For years, the singer and guitarist has been known as rock’s crankiest revivalist — the guy most likely to dismiss rap in his defense of the Way Things Used to Be.

But with his bold new solo album he’s happily disrupting that caricature.

To make the just-released “Boarding House Reach,” White sought musicians who’ve played with the likes of Kendrick Lamar and Kanye West. Together they developed a jumpy, fragmented sound that emphasizes texture and rhythm over the neat song structures with which White built his audience.

Listen to “Corporation,” which is basically an extended funk vamp with squalling electric guitar. Or “Ice Station Zebra,” a tempo-shifting ditty in which White sing-speaks — we may as well call it rapping — about how “everyone creating is a member of the family / Passing down genes and ideas in harmony.”

Even “Over and Over and Over,” one of the album’s singles, has less to do with a catchy chorus than with all the freaky ways White can rephrase the song’s pummeling central riff.

If it’s a rock song, it plays like its own remix — Led Zeppelin as channeled by DJ Premier.

“Hip-hop is the new punk rock,” White said this week over drinks in downtown Los Angeles, a few hours before he played a sold-out show at the Mayan Theater. He was dressed, as he often is, in all black; before him sat a French martini, which he downed in four gulps.

“Rappers have the dangerous edge of music now — what I would consider the closest thing to that stuff you might not want your parents to know you’re listening to.”

Dangerous or not, hip-hop is also hugely popular, and has been for decades. Last year, according to Nielsen Music, rap overtook rock for the first time as America’s most-listened-to genre. So you could say White is merely following trends, switching up his style to avoid looking like a dinosaur.

Except he knows this new collection of music is precisely the opposite of what many of his fans were hoping for. Reviews of the album have been mixed, while the crowd at the Mayan received “Corporation” with a fraction of the enthusiasm it had for the White Stripes’ “Seven Nation Army.”

“I hear a lot of talk about people listening to this album, saying, ‘You don’t even actually hear a song till you get to ‘Over and Over and Over,’” White said. “What they’re really saying is, ‘I’m not hearing a song that I want from Jack White until ‘Over and Over and Over.’ They want me to write songs like I did on ‘Elephant,’” he continued, referring to the White Stripes’ 2003 disc.

But that idea didn’t excite him. His ambition was to conjure something of the disjointed quality of life in 2018, for which he said hip-hop’s attack is better geared than a more traditional roots-music approach.

Close listeners are aware that he’s been inching in this direction for years — on 2014’s Grammy-winning “Lazaretto” and on the White Stripes’ perfectly titled “Icky Thump,” which came out in 2007 before the band broke up.

Back then, White had reservations about being associated with hip-hop, not least because he wanted to put some distance between himself and brutish rap-rock acts like Limp Bizkit.

Today, though, he seems eager to be part of a conversation that includes Nicki Minaj (whose song “Only” is a favorite of White’s) and Lamar’s “Black Panther” soundtrack (“Those are some weird songs!” he said, clearly awed).

As a result, “Boarding House Reach” feels newly modern in its eclecticism, and also in the way he opens the music to other voices, including Nashville gospel group the McCrary Sisters and Australia’s eccentric C.W. Stoneking, who delivers a spoken-word passage in “Abulia and Akrasia.” Never before has White seemed less excited by the role of patriarchal rock god.

“There are two songs on this album that I don’t play any instruments on,” he said. “That’s great.”

To find some of the players White inspected YouTube concert clips.

“I’d literally point and say, ‘Can we find out who this guy is?’” he recalled. He was searching for musicians capable of replicating in real time what hip-hop producers do in the studio. Once he found them, he convened two separate groups, one in New York and one in L.A., and started jamming.

Asked what kind of license he gave his collaborators, White invoked “Star Trek: The Next Generation.”

“It wasn’t like the old ‘Star Trek,’ where there was this hero, Capt. Kirk, who told everybody what to do,” he explained. “Capt. Picard said, ‘Someone give me options.’ That’s the way to be the captain of a ship.”

White said he so enjoyed the experience that maybe one day he’ll get into the songwriting-by-committee that undergirds the Top 40 — at least if he can get over his worry that pro writers likely show up to sessions “talking about how much percentage of the publishing they’re going to get.”

For now, he feels insulated from the hard industrial realities of a record business desperate for surefire hits. His success allows him to make the music he wants to make, and when he does write with someone else, it’s someone at an equal level of self-determination — Beyonce, for instance, with whom he created “Don’t Hurt Yourself,” from her 2016 album “Lemonade.”

For White, the compromise is never about art; it has to do with his willingness to promote what he’s done.

“Do you want to sell 10,000 copies or 500,000 copies?” he said. “That’s when you have to make decisions about whether to sit down and do this interview with you and whether to go to this radio station later and play these shows in L.A. and New York.

“How many people do you want to reach?”

As OK as he appears with turning people off, White hasn’t lost his desire to play to a mass audience. (Indeed, he’s headlining June’s Arroyo Seco Weekend festival at the Rose Bowl with Neil Young and Robert Plant.)

So the day before the Mayan show he was at the studios of KROQ-FM, L.A.’s powerful alternative-rock station, to record a performance and do some friendly back-and-forth with one of the station’s DJs.

The gig took place in a logo-dense room known as the HD Radio Sound Space — the type of branded environment White hated in his early White Stripes days.

Has his attitude evolved?

“Instead of saying ‘evolved,’ I’d say I’ve given up on a lot of it,” he replied with a laugh. “No one cares about selling out anymore.”

White said he understands the shift at a moment when few musicians can count on record sales as a meaningful revenue stream.

Still, he admitted he was struck after he moved to Nashville by the country capital’s cheerful embrace of the type of commercial opportunities he’d scorned as an underground garage rocker in his native Detroit.

“If Garth Brooks is on the side of a bus, people are congratulating him, you know? Like he accomplished a great thing.”

White is more uneasy about another expectation of 21st century celebrity: that a pop star document his life on social media.

For one thing, the constant sharing leaves little room for the mystery he was attracted to in Bob Dylan and Lou Reed and other pre-Instagram era rockers. It’s a quality he continues to care about, though he’s not sure anybody else does.

“That coolness — is it around?” he asked, shrugging his shoulders. “Is a guy on a motorcycle still cool?”

More important is his concern for his privacy, especially for his two young children.

“I’m very cautious about having them be a part of all this,” he said. “They never asked for it, and they need to have their own lives.”

In holding back, he’s thinking of them in another way too, since he fears that one effect of our ever-deepening stream of digital stimulation is that kids are no longer getting bored — and therefore aren’t allowing their minds to wander toward art or music as his once did.

As he pondered that idea, White revealed a bit of the old-fashioned sensibility that his daring new album seems to shake.

“Sometimes I feel guilty as a parent — like, ‘Oh, it’s Sunday, I need to do something with them.’ But you know what? I’m actually really enjoying that they’re just laying on the carpet playing a board game.

“That’s what I would’ve been doing at their age and I loved it.”