‘1945’ is a lean, unadorned parable about guilt and the nature and consequences of evil 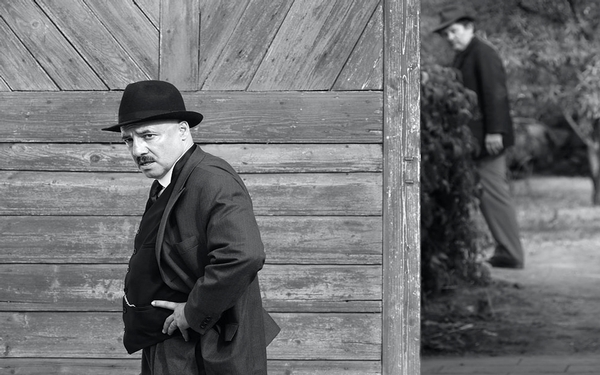 The premise is simple but compelling: Two strangers get off a train in a small town and nothing is ever the same again.

It could be the premise for a classic western set in Tombstone or Dodge, but the town is in rural Hungary, the two men are Orthodox Jews and the year, as the title indicates, is “1945.”

A Hungarian feature coming just a few years after that country won the foreign language Oscar for the Auschwitz-themed “Son of Saul,” “1945” is a very different but equally compelling film. Strongly directed by Ferenc Török from a script he cowrote with Gábor T. Szántó, this is a lean, unadorned parable about guilt and the nature and consequences of evil.

Photographed in luminous, high-contrast black and white by Elemér Ragályi and driven by Tibor Szemzö’s unnerving score, “1945” is a quietly furious film that puts a particular time and place under a microscope, revealing hidden fault lines and differences that had been papered over.

Taking place over several hours on a single hot August afternoon, just a few months past V-E Day, “1945” presents a world that is trying to get back to normal even as it senses that normal will be harder to achieve than it hopes.

István Szentes (Péter Rudolf), the town notary and owner of a prosperous pharmacy, is introduced shaving for what he hopes will be a wonderful day. His unassuming son Árpád (Bence Tasnádi) is set to marry a local beauty, Kisrózsi (Dóra Sztarenki), and if he can keep his substance-abusing wife, Anna (Ezter Nagy-Kálózy), under control, István is looking forward to a respite from his troubles, which he has a lot of.

For though the war is over, victorious Russian troops show no signs of leaving. Some returning Hungarian soldiers, like the muscular malcontent Jansci (Tamás Szabó Kimmel), formerly engaged to Kisrózsi, are happy about that, while others in the town worry what that will mean.

But then the train, belching black smoke like some malignant presence, arrives, and those two serious, unsmiling Jews, father Hermann Sámuel (Iván Angelusz) and his son walk out onto the platform, creating a major disturbance in the field by their very presence.

Arriving with a large, mysterious trunk, they arrange to have it taken into town by cart but insist on walking alongside it, leaving plenty of time for the worried stationmaster to speed into town and spread the news.

Like characters in some kind of slow-motion horror film, the townspeople share the terrifying word: “Jews have arrived,” “Jews are in the village” or the blunt “They’re back.” Questions of what happened during the war, what was done to make everyone feel this way, are artfully raised and gradually answered.

One of the factors that makes “1945” especially involving is that the arrival of the Jews is so disturbing that it stirs up conflicts, tensions and animosities that have little to do with the newcomers or what happened during the just-concluded war.

Simple, powerful, made with conviction and skill, “1945” proceeds as inexorably as Sámuel and his son on their long walk into town. It’s a potent messenger about a time that is gone but whose issues and difficulties are not even close to being past.