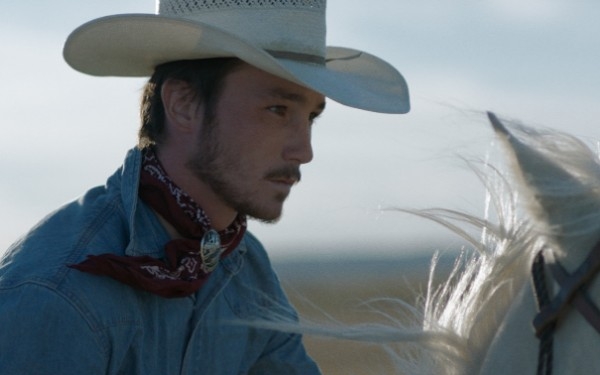 They sat me at a table with white linen tablecloth blowing in the warm Los Angeles breeze outside the Four Seasons Hotel in Beverly Hills. Three crystal chandeliers hung above me, glinting knowingly as I set up my recorder. I didn’t know what to expect from Brady Jandreau, the star of The Rider. I wondered if the South Dakota cowboy would be spruced up in a suit and tie for his big day full of interviews with Hollywood journalists keen on breaking him open. I look up and I see the silhouette that instantly made me feel silly. The wide-brimmed cowboy hat, the boots, the bolo tie, and the hands casually resting in his pockets until one of them went up to take his hat off so he could greet me properly. Brady Jandreau was and always will be a cowboy, the setting makes no difference.

“The very first time I competed in the rodeo was when I was two-years-old. It was in the sheep-riding event where I was only wearing a diaper and a t-shirt,” Jandreau explains. “I probably stayed on about three seconds. A lot of times an adult will like run alongside and help the kid stay on, but they let me go. I hit the dirt pretty hard, and so began my love for rodeo.”

Jandreau, now 23-years-old, is a Lakota cowboy of the Oglala Sioux Tribe in South Dakota. His life has always been centered around horses, whether riding them or training them, as they are an integral part of the spirit of his people and the land they’ve lived on for hundreds of years. It was here on this land that director Chloé Zhao stumbled upon Jandreau and his community of cowboys. Coming to learn about the people who made up the culture of the American Heartland, she found even more: a people who live and breathe by the backs of horses, who mold their sense of identity around the mere seconds it takes to get bucked off the animal.

A year after meeting Brady, however, Zhao found this relationship can be a bit more complicated when she witnessed the young cowboy get thrown off his horse and nearly have his skull crushed in. This is when she began to see The Rider take its form.

“I kinda giggled to myself about [the thought of being an actor] at first. But I’m used to putting myself in front of people, you know, at rodeos or selling horses. At a very young age I decided to quit worrying what people thought about me to be honest,” says Jandreau.

Jandreau immediately gets hurled in front of Zhao’s intimate camera, beginning with his early days of recovery after his accident that left him in a coma for three days. A metal plate in his head and a huge scar to prove it, Brady must face his new reality as a lame cowboy.

It’s worth mentioning that The Rider is not a documentary, but only in the slightest of senses. On screen, we know him as Brady Blackbird, but we get to watch Brady Jandreau train a wild horse in real-time. Zhao’s perspective is one of emphasis, not dramatization, so the world is filled with the people who know the heart and mind of a rider the best.

Jandreau explains, “[Chloé] played around with some ideas of possibly casting some professional actors, and different ideas of rodeo and ranching people. She thought of some different things, but a lot of my friends actually work on the ranch and knew Chloe the whole time, my dad and [my sister] Lilly as well. Lilly was always on board with it, she loves doing stuff like that. She loves movies and television. My dad was a little bit harder to convince at first. It’s not that he was against it in any way, it’s just he never expected to be in a movie either. He chuckled about it at first, and it would take a few takes for him to get serious, but he did an excellent job.”

Rather quickly, Zhao pushes Brady Blackbird to face his new identity as an Indian cowboy who can no longer ride on the backs of the creatures his ancestors tamed to the land. For outsiders, it may seem like there’s plenty more to accomplish outside of the world of horses, but for Brady and everyone else on the Pine Ridge Reservation, a place with little agricultural and financial opportunities, it runs deeper than that.

“The Sioux have always been a very prominent horse people,” Jandreau says. “They were a very dominant tribe because of their horsemanship abilities. They were nomadic people, and were able to travel and generally be faster and bigger than everyone else. A group of Native American women could set up a teepee in twelve seconds and disassemble it in ten. It’s still practiced today. The Oglala Sioux tribe by a statistic is the poorest county in the United States and it has the highest crime rate per capita. These people who were used to living nomadic their whole life were basically put on this one spot, which they couldn’t utilize the land very well. But it was always a horse culture.”

What’s even more powerful in The Rider’s exploration of rebirth and reformation, is that Brady isn’t the only one is dealt a tough deck of cards. Lane Scott is Jandreau’s real-life long-time best friend who went through the ranks of rodeos and bull-riding and together dreamt of hitting the big leagues. Before Lane could achieve that dream, however, a terrible car accident left him completely paralyzed and unable to walk or speak. Through some truly impactful scenes, Zhao shows the intimate connection between two friends, still full of spirit and passion, trying to push each other back to the top after being physically broken. Lane, in many senses, is the unseen fire the keeps Brady’s head above water.

While The Rider is, on its surface, about cowboys, which can be a world full of machismo and showmanship, Zhao fills it with brimming empathy, understanding, and compassion, and Brady carries it. Brady feels guilt that an animal with his condition would be put down out of its misery, that it’s the mere fact that he is human that’s keeping him alive. For a first-time actor, and someone who still deals with that question in real life, that could be a daunting affair. So, in terms of acting, is Brady Jandreau ready to do it again?

“I spose if some kid came along decided to enter a rodeo and he won it, I expect he’d probably think about entering again.” Enough said.

THE RIDER opens in Los Angeles at The Landmark and in New York City at the Landmark 57 West and the Angelika Film Center on April 13th.  There will be Q&As with Writer/Director Chloe Zhao and Actor, Brady Jandreau on Friday, April 13 (7:20 PM Show) and on Saturday, April 14 (4:30 PM). For more information about the film and to purchase tickets visit https://sonyclassics.com/therider/