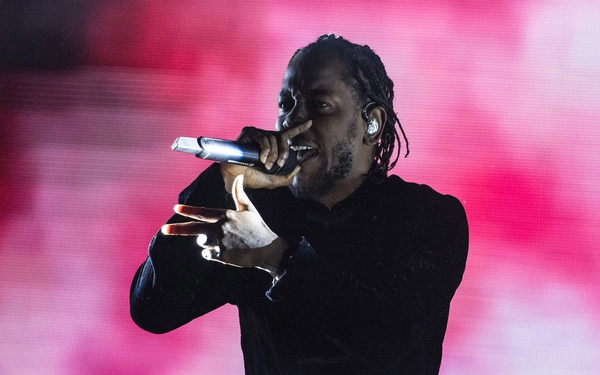 Kendrick Lamar, on stage at the Coachella Valley Music and Arts Festival in Indio, Calif., on April 23, 2017. Lamar won the 2018 Pulitzer Prize for music for his album "Damn." (Brian van der Brug/LA)

Compton rapper Kendrick Lamar won the 2018 Pulitzer Prize for music for his album “Damn,” providing perhaps the biggest surprise as the awards for journalism, arts and letters were announced Monday in New York.

Lamar becomes the first hip-hop artist to win the Pulitzer’s music category, which traditionally has honored classical works but was opened up to jazz and pop in 2005. Jazz master Ornette Coleman won the category in 2007, but Lamar represents the Pulitzer’s biggest swing toward popular music.

Finalists in the music category were “Quartet” by Michael Gilbertson and “Sound From the Bench” by Ted Hearne.

Martyna Majok won the drama award for her play “Cost of Living,” which the Pulitzer announcement said examined “diverse perceptions of privilege and human connection through two pairs of mismatched individuals: a former trucker and his recently paralyzed ex-wife, and an arrogant young man with cerebral palsy and his new caregiver.” Finalists in the drama category were “The Minutes” by Tracy Letts and “Everybody” by Branden Jacobs-Jenkins.

Andrew Sean Greer’s “Less” won in the Pulitzer’s fiction category, and Martyna Majok’s play “Cost of Living” won in the drama category. Other finalists in the category were “In the Distance” by Hernan Diaz and “The Idiot” by Elif Batuman.

“The Gulf: The Making of an American Sea” by Jack E Davis was the Pulitzer winner for history. Other finalists in the category were “Fear City: New York’s Fiscal Crisis and the Rise of Austerity Politics” by Kim Phillips-Fein and “Hitler in Los Angeles: How Jews Foiled Nazi Plots Against Hollywood and America” by Steven J. Ross.

In the biography category, the award went to “Prairie Fires: The American Dreams of Laura Ingalls Wilder” by Caroline Fraser. Finalists were “Richard Nixon: The Life” by John A. Farrell and “Robert Lowell, Setting the River on Fire: A Study of Genius, Mania, and Character” by Kay Redfield Jamison.

The general nonfiction award went to “Locking up Our Own: Crime and Punishment in Black America” by James Forman Jr. Finalists were “Notes on a Foreign Country: An American Abroad in a Post-America World” by Suzy Hansen and “The Evolution of Beauty: How Darwin’s Forgotten Theory of Mate Choice Shapes the Animal World — and Us” by Richard O. Prum.