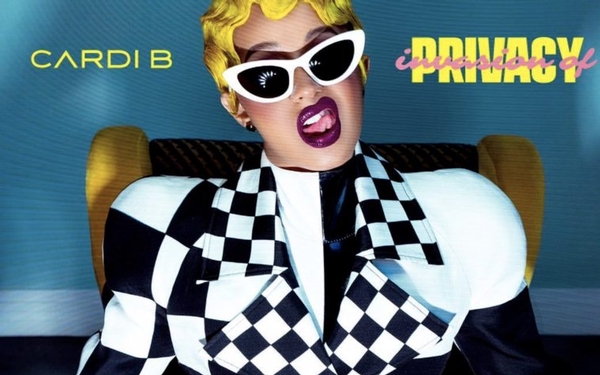 “Invasion of Privacy,” the debut album of the emcee born Belcalis Almanzar, has arrived. She’s finally coming out with a full-length official major-label product — she’s previously released multiple mixtapes — to take advantage of the massive success of her 2017 summer-dominating single “Bodak Yellow.”

In the standard flash-in-the-pan narrative, this is supposed to be when Cardi B. is exposed as a one- (or two-) hit wonder, last year’s viral sensation’s last gasp at relevancy.

But “Invasion of Privacy” demonstrates the opposite. The album opens with the sounds of sirens and the ominous battle rap “Get Up 10,” an intense, unrelenting statement of purpose that takes a page out of the playbook of “Dreams & Nightmares,” the signature song by Philadelphia rapper Meek Mill (whom Cardi B toured with last year) that’s become more popular than ever since the Philadelphia Eagles and 76ers adopted it.

“Get Up” immediately establishes that “Bodak” and its successor “Bartier Cardi” weren’t flukes. It sets the table for a disciplined 13-song album that never grows flaccid or dull and always keeps the rapper’s enormously engaging personality and flair for language on display, with rags-to-riches boasts such as: “Went from making tuna sandwiches to making the news / Started speaking my minds and tripled my views / Real b —, only thing fake is the boobs.”

“Privacy” is packed with featured guests, and Cardi occasionally risks taking a backseat on her own album, particularly on “Drip,” which features her fiance, Kiari “Offset” Cephus, to whom she got engaged at the Powerhouse concert at the Wells Fargo Center in October, as well as his fellow rappers in the Georgia trio Migos.

The presence of multiple producers and stars in their own right on Privacy, though, also allows Cardi to showcase her versatility, whether slowing the pace as she lets her man know she’s well aware of his transgressions in “Be Careful” and “Thru Your Phone,” or extolling the power of positive thinking with Chance the Rapper on “Best Life.”

As “Privacy” comes to a close, she exerts her independence on “I Do,” a collaboration with SZA, the North Jersey alt-R&B songwriter who was another of 2017’s breakout acts. After announcing that she’s “so good, I scream my own name during sex,” the rapper has a last word for the haters who expected her time on center stage to be up by now: “They said that by now I’d be finished, hard to tell / My little 15 minutes lasting long as hell.” Indeed they are, with no indication of stopping. — Dan DeLuca

Laura Veirs sings in a precise, clear voice that often ascends to ethereal heights in a song’s chorus. That clarity is a perfect analog for the themes of “The Lookout,” an album about seeking solace in troubled times. Over her 10 solo albums, Veirs has been a subtle and varied songwriter, but “The Lookout” is sharply focused: unlike her character-driven contributions to 2016’s “case / lang / veirs,” her collaboration with kd lang and Neko Case, these songs are ruminative affirmations. On the title track, she finds hope in a loved one: “But man alive, I’m glad that I have you. / You, my lookout on the ground, / making music.” In “When It Grows Darkest,” the lookout is the North Star, a lodestar providing reassurance: “When it grows darkest / the stars come out.”

Veirs’s husband, Tucker Martine, produced the album, and though it often focuses on Veirs’ guitar-picking, it’s a richly textured set, with room for strings and woodwinds, a Grateful Dead cover, and cameos by Sufjan Stevens and Jim James. — Steve Klinge

On her first album, the self-released “Jalopies and Expensive Guitars,” Ashley McBryde gleefully stuck it to an old high school tormenter: “You got fat and I got famous!” The “famous” part might have been a bit premature in 2016, but McBryde is on her way now. With “Girl Going Nowhere,” on a major label and with big-time producer Jay Joyce, she is one of the most talked-about young artists in country. And no wonder.

The title song picks up on the vindication theme, albeit in a quieter fashion, as McBryde revels in knowing she has proved wrong all those back home who ridiculed her dreams of making it in country music. Here’s the thing, though: While McBryde obviously burned to get out of small-town Arkansas, she expertly draws on her experiences there for songs that have an unerringly true-to-life quality. “Radioland” is an anthemic country-rocker about the kind of lifeline music on the radio can provide in the boonies, but she never romanticizes the life. The Skynyrd-esque “Livin’ Next to Leroy” underlines that: It’s a pointed rejoinder to the bro-country ethos: “On the dark side of the country, it ain’t bonfires, it ain’t beer. … You find out quick how big a hit that class ring will get you, boy.”

So McBryde knows how to bring the attitude, but she balances that with a tender and vulnerable side, from a fond reminiscence of her father in “The Jacket” to the mix of exasperation and affection in “Andy (I Can’t Live Without You),” and the wound-licking solace of “A Little Dive Bar in Dahlonega” — “Making the best of a worst-day kind of night.” — Nick Cristiano