A classic tennis rivalry is dramatized in ‘Borg vs. McEnroe’ 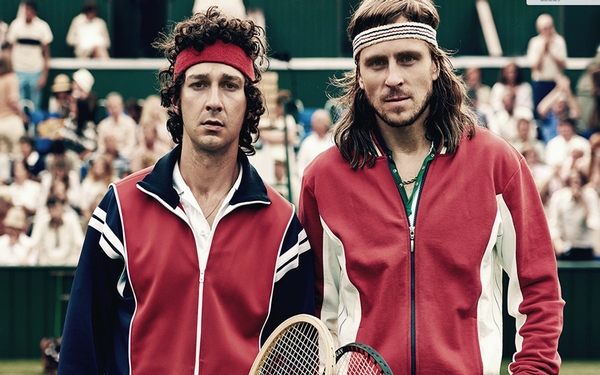 The world knew them as once-in-a-generation rivals, tennis titans who went at each other hammer and tongs. The sledgehammer versus the stiletto, Ice Borg versus Superbrat, “as different,” one observer says, “as two people could be.”

But it is the intriguing notion of the involving, in-depth “Borg vs. McEnroe” that these men were in effect brothers under the skin. Both insecure and riven by doubts, not to mention absolutely allergic to losing, they simply handled identical impulses in quite different ways.

Directed by Denmark’s Janus Metz (best known for the documentary “Armadillo”) and written by Sweden’s Ronnie Sandahl, “Borg vs. McEnroe” had the shrewd idea of structuring a look at both individuals through the lens of their beyond-epic five-set 1980 Wimbledon final, a classic among tennis matches.

Though American sports dramas find it hard to avoid heartwarming elements, this is a decidedly more even-keeled film, its European nature allowing it to focus on the drama of character as well as what happened on the court.

“Borg vs. McEnroe” is also helped considerably by its casting, starting with its leads.

Icelandic-born Swedish actor Sverrir Gudnason, who trained for months to attain Borg’s physique, is almost the tennis player’s double, and Shia LaBeouf, an actor who’s had anger management issues of his own, brings the ideal manic energy to his portrait of the American.

Just as strong in supporting roles are the veteran Stellan Skarsgard (in a rare recent Swedish-speaking part) as Borg’s coach Lennart Bergelin and Tuva Novotny as Borg’s fiancee, Mariana Simonescu.

The film unfolds over the two weeks of the tournament itself, with considerable flashbacks to both players’ pasts, both on and off the court, allowing us to see who they are and how they got that way.

(The real-life Borg and McEnroe were not involved in the production, though Borg’s son Leo plays his dad as a preteen. As for McEnroe, he told the English newspaper the Telegraph, “If they wanted me to look like a jerk, they could have come up with something far better than they came up with, in my humble opinion.”)

It’s Borg we see first, working out in his home in Monaco, worried that people want him to fail and terribly uncomfortable with the demands celebrity makes on his life.

Supported, not to say enabled, by his long-suffering fiancee and his patient coach, Borg has in effect made routine his religion. Any deviation, whether in how his suitcase is packed or his rackets strung, makes him crazy.

The always-aggrieved McEnroe, for his part, has a monster chip on his shoulder and an obsession with people not taking him seriously. Seeming to thrive on chaos, he’s shown in flashbacks as a product of ultra-demanding, unbending parents.

Borg’s story (the film volleys back and forth between the two of them) turns out to be more complex and more involving.

Astonishingly given his future demeanor, the boy Bjorn is shown to have a volcanic temper of his own, in part fueled by class resentment toward a tennis establishment that tells him to his face that the sport “is not suited to all levels of society.”

Slowly but surely, things began to change for Borg when Bergelin, coach of Sweden’s Davis Cup team, sees his potential. “All that rage, all that fear and panic,” he eventually tells him: “put it into every stroke.”

Using body doubles instead of real Wimbledon footage, “Borg vs. McEnroe” still has no trouble making the actual tennis as involving as the off-court stuff, which includes incidents like McEnroe mistreating doubles partner Peter Fleming when it suits him.

The ferocity of the Wimbledon final between these two more than delivers on its promise, holding us completely even if we know the outcome.

One of “Borg vs. McEnroe’s” strongest elements is the growing realization on both sides that each man mirrors the other. When McEnroe says with passionate urgency, “You don’t understand what it takes to play tennis,” we feel he is speaking for both himself and his rival, no questions asked.