Ward Serrill: Director gets to the Heart of the Game 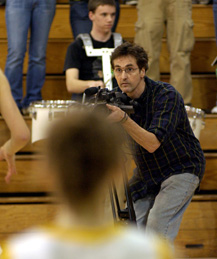 The prospect of seeing yet another superfluous movie about girls-who-can-play-like-the-boys leaves me feeling nauseated and running for the bathroom. Heart of the Game , thankfully, is not this movie. In fact, Game is one of the more inspiring documentaries released in recent cinema.

It tells the true tale of one Seattle girls' high school basketball team, the Roosevelt RoughRiders, and its ascent up the food chain of high school sports with the help of point guard Darnellia Russell, the uncannily talented freshman who takes the lead both of the team and the Game .

“I had no idea where the story was going to develop,” professes director Ward Serrill. Story? It's what he refers to as “pixie dust.” Fortunately for him, something magical walked into the gym.

The RoughRiders were poised for a comeback in their high school league, right when Serrill began filming Heart of the Game . The director had no idea where the team would lead him or what he was doing in the gym of this Seattle high school when suddenly, Miss Russell entered – “Pixie Dust.”

For the next five years, the RoughRiders and Russell attack female sports with passion, angst and a wolf's stare. Meanwhile, Russell battles her own demons which in turn elevate Game from a mediocre sports flick to a tender, heartfelt documentary.

When asked about the rough decisions she makes, the basketball star simply states, “I knew I had to.” End of story. Well, not exactly.

Heart of the Game isn't about basketball, unlike those other god-forsaken pieces of trash called ‘films that place subtext in the sport and not the people on the court.' Serrill, despite his novice filmmaking experience and self-declared naïve perspective on the whole process, assembles a fine debut documentary that is able to balance the narrative of the sport on the court with the developing intensity of what happens outside practice.

“I naively stepped in ... [the film] has been a magic carpet ride and a continuous mountain climb.” Serrill makes a documentary with a pulse and some intrigue.

Heart of the Game isn't about basketball. Resler coins it nicely when he explains that he teaches “life things.” Serrill's documentary too is, in a sense, about “life things.” Perhaps the director's naivete prevented him from becoming too jaded to make a mature story? Then again, maybe it's not cliché to think that culture could still be shocked, particularly by Darnellia's story? This is, at least, a main question that Serrill asks of himself as an artist.

A question that he begins to explore possible answers to in his debut documentary. With no crew and one camera, the first-time director entered the gym with very grim hopes for a story. After five years of basketball and seven years of filming, Serrill screened a 98-minute gem that, despite its simplicity, starts to suggest some mature responses to the very question he asked himself just a few years earlier.

Darnellia and her story have inspired Serrill's next project, a full length screenplay in which the director hopes to more extensively explore the people – and characters – of Darnellia Russell and Bill Resler.

The lights slowly turned on and, during a rather peaceful drive on the 110, I realized why I was so entranced by this little film. As a documentary, it managed to establish textured characters. Beyond that, Serrill found not just real characters but true character in every person inside the high school gym.

Heart of the Game releases in select theaters on June 9.