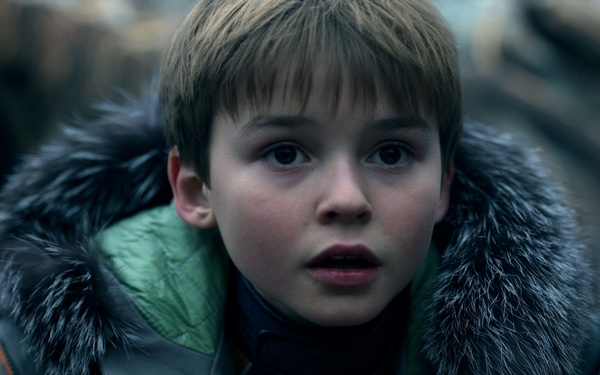 Say you wanted to remake the 1960s sci-fi series “Lost in Space” for a 2018 premium streaming network, a show that went off the air 50 years ago, a show whose own vision of the future only extended to 1997.

There are things you would have to include. “Lost in Space” is not “Lost in Space” without the Robinsons, the robot and Dr. Smith; you might get away with losing hotshot pilot Don West, but someone would complain. You would need a spaceship called the Jupiter II (do not ask what happened to the Jupiter I), circular in design. Like the Swiss Family Robinson whose name they pointedly share, they would need to be lost — not upon the seas but … in space. At some point the robot is going to have to say, “Danger, Will Robinson.”

And there are things you would have to do differently.

Netflix has taken this challenge: Its new “Lost in Space,” developed by Matt Sazama and Burk Sharpless (the “Power Rangers” movie) from Irwin Allen’s original series, opens for streaming Friday. (A film adaptation, with an A-list cast and $80-million budget, came out in 1998. We need not speak of it here.)

It’s not without problems, mostly with pacing and length and a certain repetitiousness that creeps in when your story lasts 10 hours. But its solutions to building and modernizing characters who in the original were brightly painted cutouts are generally sound, while some basic alterations to the premise help ensure that the new series is not the cosmic “Gilligan’s Island” the ‘60s series became.

The balance of exposition and action is good, and the show has been made in an expensive-looking way practically required of contemporary sci-fi.

The Robinsons are no longer the first family in space, but part of a massive colonization drive, spurred by environmental catastrophe on Earth. (Not man-made this time, but the result of a collision with an extraterrestrial object.) They are attached to the Resolute, a sort of space-going aircraft carrier able to make the Alpha Centauri run in more or less no time; the Jupiter II is the family-sized flying saucer meant to carry them to the surface.

But some things happen and they, and several other families, wind up stranded on an uncharted, unsettled planet that — as in the original — threatens in various ways to kill them.

The women’s parts have been strengthened. In the original, June Lockhart’s Maureen, though nominally a biochemist and not without maternal spine, actually served milk and cookies. Now Maureen (Molly Parker), a scientific polymath, is the effective head of the family, to which John (Toby Stephens), a former Navy SEAL often away, is trying to return, even as his wife files for divorce. Older daughter Judy (Taylor Russell), little more than a blond mannequin in the original, is a medical doctor (and the product of Maureen’s first marriage, and biracial). Penny (Mina Sundwall) is still the dreamy middle child, but also a sulky teenager ready to rebel. She and her sister don’t get along.

Dr. Smith — the old show’s resident villain, functionally an eccentric uncle the family watchfully tolerates — is now played by Parker Posey, who is always welcome in these critical parts. Her June Harris (surely named for Jonathan Harris, the original Dr. Smith) has stolen the identity of a Dr. Smith (a cameo appearance by Bill Mumy, the original Will Robinson). Where the ‘60s Smith, an accidental stowaway, was always scheming to get back to Earth, Posey’s wants to get as far away from it as possible. To what degree she’s a sociopath is unclear; occasionally a confidence seems to come from the heart, but is clouded by subsequent actions. Like a fox in the henhouse, she lends a continual frisson of danger, and, as before, Smith is a dominant character.

As in the original, Will (Maxwell Jenkins) is central, and a prodigy, though more of a wide-eyed innocent here — with none of Mumy’s TV-kid sass — and more emotionally connected to the robot (he has abandonment issues). To round this out, Don West (Ignacio Serricchio) is now a mechanic with a sideline in smuggling, more like one of the happy-go-lucky space rapscallions the ‘60s Robinsons would regularly encounter than the teeth-gritting pilot of the original.

I think it’s worth sticking with, though I can see that some viewers may find their patience tried, by the clockwork arrival of disaster as much as by the behavior of the characters. (This series may be better watched weekly than binged.) The Robinsons, as recast here — as re-castaway here — can be mopey and sad and sniping, it is true, with a tendency to withhold information from one another.

It’s always a little weird when characters bring their personal resentments into life-and-death situations — you just want them to get over themselves — but I suppose people do, and anyway, it gives them somewhere to go over the course of the season. They get there, if you can wait. The robot, too.