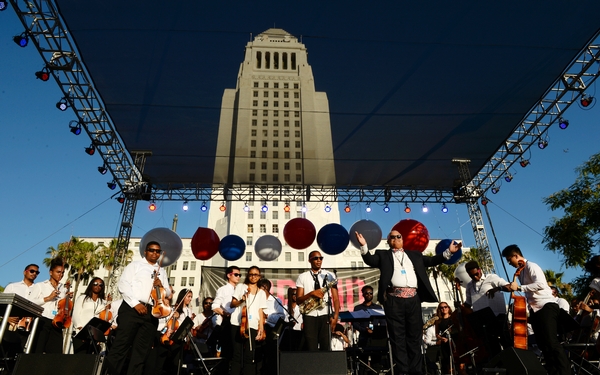 The Music Center today announced Grand Park’s 2018 summer season with free programming that offers Angelenos the opportunity to participate in their favorite outdoor activities amidst the beauty of Grand Park.  The season kicks off in June with the popular Grand Park’s Bootcamp series, followed by the return of Grand Park’s Big L.A. Portrait Gallery, Sunday Sessions and The Music Center’s Dance DTLA*, featuring Dance Downtown and specially curated DJ Nights.  Additional highlights of the season include Grand Park + Outfest Present PROUD Movie Night and Los Angeles County’s tradition of celebrating the Fourth of July as one big community with Grand Park + The Music Center’s Fourth of July Block Party.

“Grand Park has built a reputation as the destination for summer fun in Southern California.  For anyone looking for a great workout, a place to spend a Sunday afternoon enjoying music with family and friends, or a night of dancing under the stars, Grand Park offers some of the best, most accessible programming in the county,” said Rachel Moore, president and CEO, The Music Center.  “A place where Angelenos can experience diverse cultures, support local artists and celebrate holidays along with members of the greater community, Grand Park is now L.A.’s hub for the best free entertainment and arts experiences,” she added.

Julia Diamond, interim director of Grand Park, offered, “Summer is a special time at Grand Park, where everyone, including jurors and parents with toddlers in tow, can enjoy all the park has to offer, including many free events that are now Los Angeles traditions.  And, with both Los Angeles County’s largest free Fourth of July celebration and Grand Park’s Big L.A. Portrait Gallery as part of our summer season, park goers can discover the talents of L.A.-based artists and musicians, dance to a new beat and experience the arts in a welcoming and open space,” she explained.

*Note: Dance DTLA will be held this summer entirely in Grand Park as The Music Center Plaza is under renovation.

Grand Park visitors can explore the entire park and get a free workout at the same time at Grand Park’s Bootcamp. Open to all and all fitness levels, this free series is a fun way to connect with others, while enjoying a fun and accessible end-of-day workout.

For the second year, Grand Park transforms into a nighttime art gallery featuring photography by L.A.-based artists projected to 100 feet wide by 100 feet high on the south wall of the historic L.A. County Hall of Records.  Built by famed architect Richard Neutra, one of his few high-rises, this iconic modernist building serves as the perfect canvas for larger-than-life artwork.  Featured images will tell stories and share visions of L.A.’s future as envisioned by some of the county’s best photographers.  Park goers can enjoy the exhibit over a picnic, view the gallery during their nighttime commute or take in the images during a stroll through the park.

Returning for the 6th summer, Sunday Sessions celebrates Los Angeles’ contribution to the American-originated, globally embraced art form of House music.  Honoring L.A.’s vibrant music scene, creativity and boundary-pushing music-making, Grand Park brings the best House music artists to L.A.’s central gathering place to relive the memories, celebrate the art-makers and connect members of the community with dance and music as a centerpiece.  Guests can purchase food from food trucks and cocktails from the bar and enjoy the sounds of summer in a beautiful setting right in the middle of the city.  Sunday Sessions will take place on the park’s Performance Lawn.

A summer favorite now in its 14th year, The Music Center’s Dance DTLA is an evening of dance under the stars on most Friday nights in the summer months, from June – September, 2018.  Hosted entirely in Grand Park, the series features Dance Downtown (7:00 p.m. – 11:00 p.m.), every other Friday night, where participants can learn new dance moves from a different dance genre at each event.  From Salsa to Disco and Bollywood, Dance Downtown welcomes anyone who loves to dance and learn some new moves in the heart of Los Angeles’ civic center.

Held on alternating Friday nights and curated by influential artists and tastemakers who give voice to Los Angeles’ dynamic and vibrant culture through music, dancing, arts and aesthetics, DJ Nights (9:00 p.m. – midnight) offer Angelenos the opportunity to dance the night away in Grand Park.  Details for each night of the series will be announced in May, 2018. The Music Center’s Dance DTLA events will be held at various locations throughout Grand Park.

The Music Center continues its series of intimate events that invite the Los Angeles LGBTQ and ally community to celebrate and connect with each other with Grand Park + Outfest Present PROUD Picnic + Movie Night. Developed in collaboration with a coalition of partners and partner organizations to reflect the diverse interests and experiences of the LGBTQ Angeleno community, Grand Park + Outfest Presents PROUD Picnic + Movie Night has the park partnering with Outfest for the third year to present a picnic and screening in celebration of fresh and diverse voices in film. A showcase of short films from the Outfest Fusion Festival along with a feature full-length presentation, filmmakers and actors will introduce the films and share insight about their craft. Guests can come early to enjoy an afternoon in the park with the sights, sounds and tastes of the summer including DJs, food trucks and the park’s popular splash pad and playground.  The screening will be held on Grand Park’s Performance Lawn.

Events
#CWABG's "How Are We Curators of the Black American Experience Now?" on 3/25 at 7PM
179 views