‘Bard’s Tale IV’ a refreshing return for the series 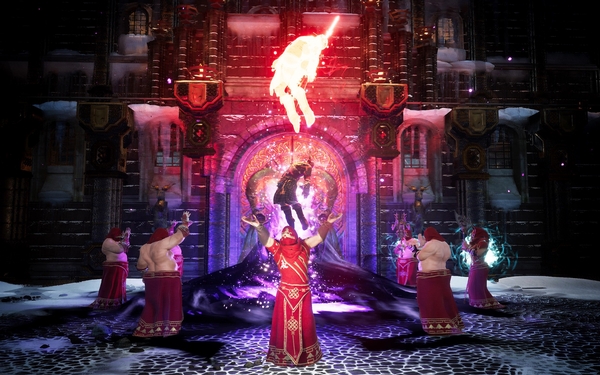 “The Bard’s Tale IV: Barrows Deep” is a first-person dungeon crawler that occurs 30 years after the defeat of Mad God Tarjan, according to David Rogers, lead designer and creative director.

Although it’s been more than 30 years since its release, I’ve never played a “Bard’ Tale” game. The original was released for the PC in 1985 and after three more sequels, the game lay dormant until a spinoff also called “The Bard’s Tale” came out in 2004.

Despite all those opportunities to play, I’ve missed every single chapter. That changed though when I checked out “The Bard’s Tale IV: Barrows Deep.” The game is a first-person dungeon crawler that occurs 30 years after the defeat of Mad God Tarjan, according to David Rogers, lead designer and creative director.

Players control a small party of adventurers as they venture into a castle captured by cultists. Built on the Unreal engine, the game looks good as players explore the fortress. They’ll uncover simple puzzles that they’ll have to solve. In this case, to open the gate, players have to move around different gears to allow the mechanism to lift it.

A lot has changed since the original was introduced and the developer inXile adapts the gameplay for that. There’s a stealth element in “Bard’s Tale IV.” Players can sneak around, but if they’re spotted, they have to engage in turn-based combat.

In the demo, the party was led by Fiona the Harper and included the orc fighter Dalgish and the Green Lady, a practitioner in magic. Rogers said he wanted to make this aspect of the game similar to “Hearthstone” or the “Duelyst.” Position matters as the rival parties are spread out on two opposite rows and their attacks reach certain areas.

For example, the practitioner can cast spells that hit four tiles in the front row, but the problem is that the adversaries are spread out. Players can use the fighters taunt ability to draw the enemies closer and open up the enemies for the brutal attack.

To actually do battle, players have opportunity points tied to each character. Each action such as an attack or generating spell energy consumes those points. As players level their characters and grow more powerful, they can gain more opportunity points. With up to six members in a party, turns can last a while because players have to figure out how to maximize the abilities of each hero. For instance, rogues can perform sneak attacks and quickly move across the battlefield. Meanwhile, bards can play songs to power up their allies and drink ale to power up their attacks and other abilities.

What’s interesting is that players can bring along party members crafted by inXile or they can add their own characters. The thing that matters is that party members scale up with the foes and main character. That means players are free to choose, which hero to bring along and craft parties for different scenarios.

Having the right party for a mission is important because some enemies have weaknesses to different types of damage. In “Bard’s Tale IV,” players have to know how to deal mental damage (psychic attacks), true damage (flames, ice, etc.) and physical damage (beating someone with a club or sword). Every enemy has weaknesses and strengths to each damage type and knowing an enemy is just as important as knowing the abilities of party members.

Lastly, items have an interesting role in character development. Exceptional weapons have built in puzzles and if player scan them, they can figure them out and increase their power. For example, I ran across a blade with a special hilt. I looked at the pommel and it had a riddle that required stone. Solving that puzzle added acid damage to the blade. Moving on, there was a second puzzle in the hilt. I had to twist pieces around letting energy from the stone flow to the sword. Doing this will power-up the sword to include a flame element that ignores armor defense.

In addition, players can learn special moves tied to a weapon. That means even if the weapon isn’t equipped they can use those moves. It’s a concept that other RPGs have used and creates another element of depth.

From what I played, “The Bard’s Tale IV: Barrows Deep” can be a good entry point to the series. Players don’t necessarily have to know much about the past games, but those who know about the previous titles will enjoy it more. Nevertheless, it’s a project that can stand on its own merit.

“The Bard’s Tale IV: Barrows Deep” is scheduled for release later this year on PC, Mac and Linux.