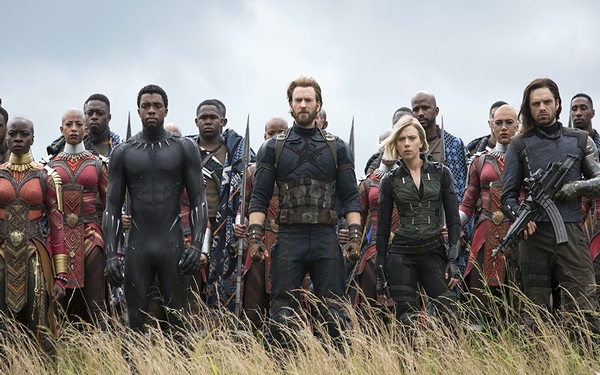 “Avengers: Infinity War” is like a greatest hits album. All of your favorites are here. They may not be as wonderful and dynamic in compilation form, but as a getting-the-band-back-together kind of homage, it offers charms of its own.

The latest mashup from the Marvel money factory is essentially one long fight scene. If you like nonstop action, and at its core Avengers: Infinity War is an action-comedy, then your ship has come in. Or rather spaceship. Or your time-altering, planet-hopping, physics-defying, 2 1/2-hour nirvana.

It’s the rare film that has no main character. Everyone is a supporting player.

For non-Marvel maniacs, you’d be better off binge-watching Netflix. Because if you haven’t been following along in the previous films with who’s who and who did what to whom when, you will be completely lost. There is no time for back stories or character development.

The film picks up where “Captain America: Civil War” and “Thor: Ragnarok” left off. The Avengers are splintered and Thor’s beloved Asgard lies in ruins. We learn that the Hulk (Mark Ruffalo) can’t out-muscle the oversized Thanos (Josh Brolin). This is not good.

Thanos is a total buzz-kill. He will stop at nothing to obtain the all-powerful Infinity Stones. For kicks, he dabbles in genocide.

Soon, as with all of these films, someone has to say it. And here, the mystical, magical Dr. Strange (Benedict Cumberbatch) gets to say it: “The fate of the universe is at stake!”

And thus, we are hurled into the superhero speed-dating appearances.

Am I forgetting anyone? Oh, yeah. The biggest star of 2018: Black Panther (Chadwick Boseman). The gang heads to Wakanda at one point, where the principals from that film lend a hand in the struggle to defeat Thanos.

It’s not easy juggling all of these characters, locations and unending special effects.

For the star-mixing of the first Avengers film in 2012, Joss Whedon managed to give everyone a story line and reasonable screen time so that it wasn’t just a cascade of cameos. “Avengers: Age of Ultron” in 2015 was a bloated affair with no satisfying climax. (You can’t have a climax if you need to set up endless sequels.)

For the Russo brothers, it was star-mixing on steroids. Whereas Whedon was trying to keep seven or eight key characters in sync, the Russos were wrangling about 25 key characters. And they mostly succeed. One of Thanos’ allies, Proxima Midnight, is voiced by Copley native Carrie Coon, new to the marvels of Marvel. And, of course, there are a few surprise appearances.

Chris Hemsworth reminds us that his Thor is not only a mighty warrior, but deft with a light comic touch, and Elizabeth Olsen’s Scarlet Witch manages to convey actual emotions in the midst of all the mayhem.

The Guardians gang comes across as the most winning, genuine, in-sync group. It’s as if we fell into one of their films, as their tone and rhythms stay true to their characters and their universe. Saldana, also a fixture in the Star Trek and Avatar worlds, continues to make Gamora one of the most engaging women in the Marvel pantheon.

The character who started it all, Downey’s Tony Stark/Iron Man, does his share of flying and fighting. Though both the actor and character look a bit weathered and weary at this point, as if to say, “How many more of these can I pull off?”

It was the clever and quick-quipping Downey who opened the comic-book adaptations to a much wider audience, and launched this cross-pollinating run of films, with the terrific “Iron Man” in 2008. (The saga continues next year with “Avengers: Infinity War — Part 2.”)

Downey is not the central focus as much as usual. If anything, the scene-stealing prize this time goes to Chris Pratt as Peter Quill/Star-Lord. Pratt jumps from blustery to goofy to vulnerable to insecure to funny with ease, as he trades barbs with Thor and his own sidekicks. Dude has charisma to spare.

What’s that Hollywood adage? Actors should never work with children or animals because they will upstage you?

We need to expand that.

Never work with children or animals. Or Chris Pratt.

Directed by: Anthony and Joe Russo

Rating: PG-13 for intense sequences of sci-fi violence and action throughout, language and some crude references