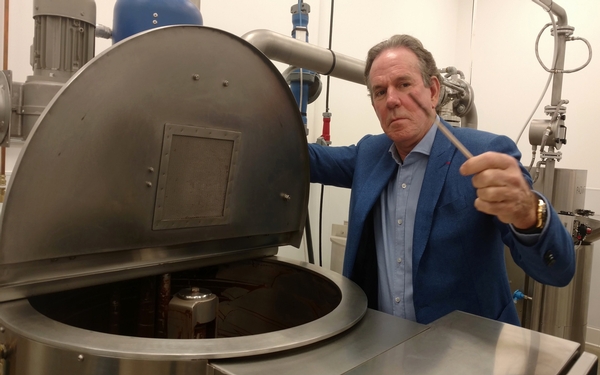 Seven years ago on the back porch of The French Laundry, famed chef Thomas Keller kicked back with his longtime friend, Italian olive oil master Armando Manni, and enjoyed a glass of wine. The two toasted their past collaborations and chatted about what could come next.

One of America’s most celebrated culinary personalities, Keller had found fame in The French Laundry and Per Se, his pair of three-star Michelin restaurants. He successfully had expanded his restaurant empire from Yountville to Manhattan to Las Vegas. His cookbooks have sold more than 1 million copies.

Manni, a filmmaker turned olive oil maker, had earned his own acclaim with his high grade Manni Oil, treasured by chefs worldwide, including Keller.

“I said to Armando, ‘Let’s talk chocolate,’” Keller said. “He comes from olive oil, which is better for you (than other fats). Chocolate also has antioxidants. (I wondered): Is there a way to combine olive oil and chocolate to make something delicious that was good for you, too?”

Manni agreed that it was an intriguing question, one that deserved to be answered.

That ride led to the creation of a luxury chocolate with healthful ingredients that soon will be available to a lot more chocolate lovers. Keller’s joint venture with Manni — K + M Extravirgin Chocolate — has expanded its line of fair trade, single origin premium chocolates as well as its distribution beyond wine country.

In Napa, the two friends founded K + M in 2012 with the intention of using Manni Oil to make the “perfect chocolate bar,” Keller said. Extra virgin olive oil would replace the traditional cocoa butter — the fat found in cocoa beans — in the finished chocolate.

When they started the project, olive oil in dark chocolate was unheard of in America, Keller said. It’s still a novel idea, however some chocolate makers and pastry chefs are beginning to experiment with their own recipes and methods.

Keller wanted more than a straight switch; he wanted more antioxidants, which “protect the body from damage caused by harmful molecules called free radicals,” according to WebMD. While cocoa is naturally high in heart-healthy antioxidants, about 60 percent of those compounds are lost in traditional processing into chocolate, experts say.

Keller and his team worked with the University of Florence in Italy to develop a way to make chocolate with olive oil while preserving both ingredients’ purported health benefits.

Such a marriage appears to have benefits. Research in Italy by the University of Pisa linked dark chocolate enriched with olive oil to reduced risks of cardiovascular disease.

Several U.S. studies have pointed to the health benefits of antioxidants in dark chocolate. According to Keller’s company, testing of K + M’s dark chocolate showed that it contains as much as three times the antioxidant level as other luxury dark chocolates.

Those antioxidants also are tied to cocoa’s flavor and aroma. Preserving more of them boosts the final chocolate’s taste, too.

“Our goal was to develop the perfect chocolate,” Manni told Forbes magazine last year. “We like to say K + M Extravirgin Chocolate is good for the body and good for the soul.”

In 2016, the company sold its first dark chocolates, a trio of bars offered exclusively through Williams Sonoma. In September, it introduced its first milk chocolate and a combination “dark milk.”

Now, the company features eight variations on its chocolate. In addition, the Napa-based company started offering its bars at many independent gourmet stores as well as online.

Born at Camp Pendleton, he moved around a lot with his family child when he was a child. “I lived in Sacramento for a while,” he said. “My father was in the service and he was stationed there. My first paper route was (for) The Sacramento Bee.”

Keller eventually moved with his mother to Palm Beach, Fla., where she ran a restaurant and he discovered his love of cooking. As a chef, he trained in France, before returning in 1984 to conquer America with his French-inspired cuisine at a series of acclaimed restaurants.

In 1994, he turned a Yountville cafe located in a historic steam laundry into one of California’s most celebrated restaurants. Dinner at The French Laundry, famous for its nine-course tasting menu with no repeated ingredients, costs $300-plus a person.

Recently, he has branched out beyond his restaurants and cookbooks to explore other products., such as baking mixes inspired by his Bouchon Bakery. But chocolate has become his current passion.

Last week, Keller invited a handful of reporters to his Napa chocolate factory to learn about its proprietary method and to sample his new chocolates. (In the Sacramento area, they’re available at Williams Sonoma at Pavilions and Roseville’s Galleria, and Taylors Market in Land Park.)

“Our goal wasn’t to build a chocolate factory,” Keller said. “But we realized our idea needed proprietarized equipment. We couldn’t just buy machines to make this chocolate.”

Instead of traditional cocoa butter, a tiny amount of extra virgin olive oil is added to each chocolate bar. The oil’s grassy flavor is barely perceptible if at all. Instead, the oil helps preserve and accent the natural richness and depth of flavor found in the cocoa beans.

“When we add extra virgin olive oil, it increases the synergy,” said head chocolatier Chi Bui. “It’s another source of antioxidants. Together, it creates something your body can use and absorb.

Because olive oil is a liquid, these chocolates also melt at much lower temperatures. They practically dissolve on your tongue.

Bui personally sources the beans, oversees roasting and develops the final flavor profiles for each product.

“For a chocolate maker, this project is the most intriguing,” she said. “It’s really pioneering. The philosophy behind it is pretty simple: Make chocolate that tastes good that’s also good for you. But it’s a tricky nexus between the two.”

A native of Vietnam, Bui brought to her work an eclectic background. Before getting into chocolate, she worked for the United Nations Development Program, helping farmers in developing countries get the resources they needed to expand their markets and become successful. As a chocolatier and pastry chef, she worked at some of New York’s top restaurants. Her current job combines both her international outreach and culinary skills.

“Part of my job is to find the most fantastic tasting beans that are sustainably sourced,” Bui said as she fingered raw cocoa beans from Nicaragua. “All our beans are single source, so we get to know the farmers.”

Cocoa beans go through several steps before becoming chocolate. The beans are fermented and dried at their source —farms in Nicaragua, Peru, Ecuador and Madagascar. The beans then are roasted at the Napa factory.

“Our process is similar (to other chocolate factories) but different,” Bui explained. “We roast the beans differently to preserve as much of the antioxidants as possible.”

The roasting room, which processes more than 400 pounds of beans a day, provides a mix of heady scents.

“During roasting , it smells like cider vinegar; a little bitter, a little sweet,” Bui said. “If the beans were fermented improperly, it smells terrible! But after roasting, the beans finally smell like chocolate.”

After roasting, the beans are crushed, exposing the flavorful nibs. The papery shells are removed and the nibs crushed into crumbs. Sugar is added and the mixture is ground into a micro-fine powder for conching, a slow process where the chocolate is stirred by machine for 72 to 80 hours.

Like fine wine, these premium chocolates are aged, she said. “But it’s much faster; three to six months,” she added.

The chocolate rests in chilled rooms to further develop its flavor before it’s made into bars.

Those flavors are distinctive and complex. The Ecuadorian “dark milk” tastes of mango and molasses while its Nicaraguan counterpart is laced with silky black currant notes. The Peruvian dark chocolate combines orange blossom and quince notes while the Madagascar beans boast bright citrus and caramel.

“The Madagascar has these soft floral notes that are very interesting,” Keller said. “I love the dark milk; the Nicaraguan is very versatile.”

In addition to being eaten out of hand, the chocolate squares can be used in cooking. Keller’s Ad Hoc restaurant in Yountville serves a delectable Peruvian chocolate pudding with dark chocolate brownie crumbs. Bouchon Bakery’s chocolate cream eclairs also boast a double dose of this gourmet chocolate.

“At the end of the day, we want our chocolate to taste like chocolate,” Keller said. “We want people to be happy. Irregardless of what came before, when you bite into it, we want to put a smile on your face.”