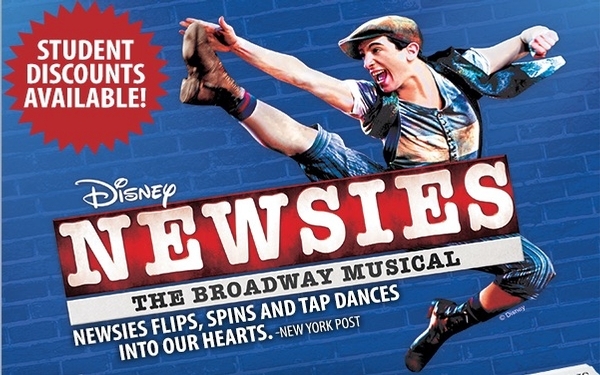 La Mirada Theatre for the Performing Arts & McCoy Rigby Entertainment invite you to “Seize the Day” as they present the fifth and final show of its 2017-2018 season (and the 40th anniversary of the iconic theatre) with Disney’s NEWSIES, book by Harvey Fierstein, music by Alan Menken, lyrics by Jack Feldman, musical direction by Brent Crayon and directed and choreographed by Richard J. Hinds. NEWSIES will preview on Friday, June 1, 2018 (with a press opening on Saturday, June 2 at 8pm) and runs through Sunday, June 24, 2018 at La Mirada Theatre for the Performing Arts, 14900 La Mirada Blvd in La Mirada.

They delivered the papers, until they made the headlines! NEWSIES, the smash-hit, crowd-pleasing new musical from Disney will ignite the stage as a finale to our 40th Season. Winner of the 2012 Tony Awards for Best Score and Best Choreography, NEWSIES has audiences and critics alike calling it “A MUSICAL WORTH SINGING ABOUT!” (The New York Times). Filled with one heart-pounding number after another, it’s a high-energy explosion of song and dance you and your family will never forget!

ABOUT THE CREATIVE TEAM AND  CAST

BRENT CRAYON (Musical Direction) has had the privilege to work with such notable artists as Stephen Schwartz, Daisy Prince, John Caird, Paul Gordon, Robert Longbottom, John Bucchino, and Richard Maltby, Jr. Favorite theatrical productions include Dreamgirls in Tokyo, Japan, the West Coast premieres of First Date, Songs For a New World and Tick, Tick…BOOM!, as well as the world premiere productions of Stephen Schwartz’s Snapshots, John Bucchino’s It’s Only Life, and Bubble Boy, The Musical. An accomplished and multi-faceted musician, Brent has been a featured soloist in ensembles throughout Southern California, including the Santa Monica Symphony Orchestra, the Long Beach Symphony Orchestra, and the Ventura Chamber Orchestra. www.brentcrayon.com

ABOUT THE SCHEDULE AND PRICING

Tickets range from $20 - $84 (prices subject to change) and can be purchased at La Mirada Theatre’s website, www.lamiradatheatre.com or by calling the La Mirada Theatre Box Office at (562) 944-9801 or (714) 994-6310. Student, Senior and group discounts are available. $15 Student Tickets available for the first 15 performances of the production.

LA MIRADA THEATRE FOR THE PERFORMING ARTS is located at 14900 La Mirada Boulevard in La Mirada, near the intersection of Rosecrans Avenue where the 91 and 5 freeways meet. Parking is free.