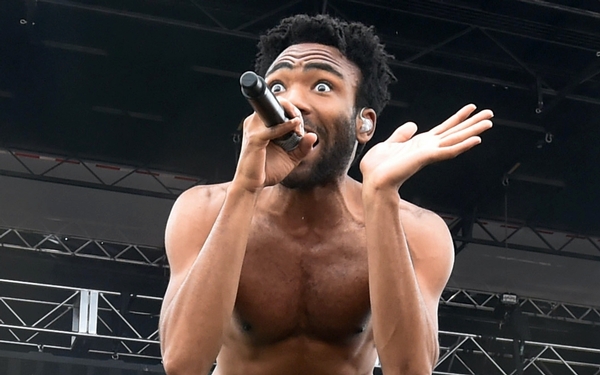 Childish Gambino performs on the main stage on the infield before the 140th running of the Preakness Stakes on Saturday, May 16, 2015, at Pimiico Race Course in Baltimore, Md. (Kenneth K. Lam)

It’s the week that Childish Gambino blew up social media with a video dubbed “This is America,” a meta commentary on the way pop culture and real-life violence collide and go boom, virally. It follows a week in which Kanye West took over the digital conversation with a handful of political Molotov cocktails about President Donald Trump and black slavery.

At their core, these rappers are not just star entertainers — they are artists whose pop cultural hegemony allows their voices to be heard above the shouting about race and institutional racism in this country. In black America, entertainment itself is often a political act, in large measure because of the way black art forms — the blues, jazz, gospel, rock ’n’ roll, hip-hop — have been appropriated and commercialized by mainstream (white) culture.

West has been releasing brilliant albums for more than a decade. Whatever anyone thinks of him as a personality, his music has transcended genres and generations. Gambino (Donald Glover) only recently raised his game from just being a guy in a lot of media nobody really cared all that passionately about. With the TV series “Atlanta” and his 2016 album “Awaken My Love!,” Gambino’s broader ambitions began to emerge, though nothing quite prepared his followers for “This is America,” which has drawn more than 50 million views on YouTube.

The video shocks even as it dazzles. Gambino dominates the foreground, striking poses and dancing with rubbery fluidity, a parody of a minstrel rapping and singing about money and partying. The dancing distracts from the chaos in the background — rioting and looting, a body dragged off, a car vandalized and the specter of death riding in on a pale horse. As Gambino satirizes the subject matter of most mainstream pop songs, he casually executes a musician hooded like a prisoner of war and guns down a joyous gospel choir, an allusion to the Charleston, S.C., church massacre in 2015.

The imagery is staggering, but the ideas represented aren’t new: black music and dancing commodified for mass entertainment, black-on-black violence as a routine element on TV news and hip-hop videos, all packaged by a corporations to increase viewers and profits. Gambino rubs our noses in it, wants the viewer to be shocked and sickened by it. Heads explode and blood splatters the walls. All the while the dancing and jiving continue, beauty and comedy merging with violence and mayhem. The pacing itself is a commentary on the way that every news bulletin and pop culture windup has become a distraction, a series of images that dominate attention spans for a few hours and then are discarded and forgotten in favor of the next flashy, disposable wave. The instant torrent of memes repurposing images from “This is America” only underlined Gambino’s point.

In Gambino’s telling, black lives are the most disposable “commodity” of all. For him, mainstream appropriation is a kind of cultural death and violence has become so ubiquitous in art, life and media that America has become numb to it — desensitized acceptance as a hallmark of business as usual.

Like Gambino’s video, West’s career is designed to provoke and upset as much as enlighten and elevate. When he embraced Trump and declared blacks complicit in their own slavery last week, it was in many ways “same old Kanye” trying to push and prod for any kind of attention. It immediately inspired a series of mocking social-media responses carrying the hashtag #IfSlaveryWasAChoice. The rapper’s statements also deeply offended many African-Americans who had followed his music from the start. Though West often comes off as an arrogant contrarian, a self-proclaimed genius at war with convention, his comments belie a deep-seated neediness, a gnawing sense of not being fully appreciated for his Kanye-ness.

But to dismiss West is also to dismiss what he represents, particularly to the generation of young African-Americans he inspired: a talented artist who realizes that acclaim and commercial success is not enough if it doesn’t free the artist from the corporate plantation. On his often abrasive 2013 album, “Yeezus,” West targeted the predominantly white power structure that he insisted excludes him. On the track “New Slaves,” West describes his business partners as slave owners in corporate disguise. Yet it’s clear he wants a seat at the table with those plantation masters dressed in suits, even if it means making nice with a president who has insulted African nations and sided with racists.

West is liable to contradict himself tomorrow, then release a brilliant piece of music next week. All may never be forgiven, but that’s clearly not a huge concern for him. Instead, much like the character in Childish Gambino’s “This is America,” he remains a moving target for fear that he too will one day be discarded by a system that only values him as a revenue generator.