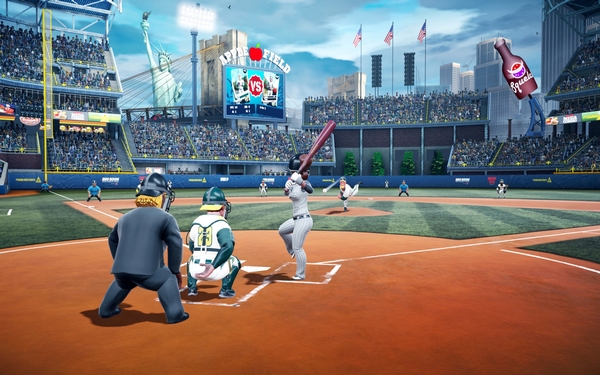 Metalhead has “Super Mega Baseball 2” ready to hit the diamond and the team appears to have hit this one out of the park. (Handout/TNS)

Baseball and PC gaming used to be the best of friends almost 30 years ago, but offerings in 2018 are incredibly sparse (apart from the sea of stat simulator baseball games). The last PC release to carry the MLB license was 2K’s “MLB 2K12” and players looking to partake in the old ball game had limited options. Canadian-based Metalhead Software ported their surprise 2014 Playstation hit, “Super Mega Baseball” to Xbox One and PC and gained a small cult following. While the game lacked the big leagues licensing and had a hard arcade-style slant, it excelled at being an easy to pick up baseball game that was extremely fun to play with a friend on the couch. This spring, Metalhead has “Super Mega Baseball 2” ready to hit the diamond and the team appears to have hit this one out of the park.

I am a lifelong video game baseball fan. I got my first taste with the original “Bases Loaded” on the NES and supplemented that addiction with the “R.B.I. Baseball” titles that came on the unauthorized black Tengen cartridges. The first “Ken Griffey” baseball game on the SNES and “MVP Baseball 2005” stand out as my favorite baseball games over the last 30 years. Being the last big-budget baseball game released for the PC, I’ve logged hundreds of hours with “MLB 2K12” and I got to experience “MLB: The Show 17

As a baseball game, “Super Mega Baseball 2” nearly hits for the cycle, only coming up short on the smallest of details and nuance. I do not judge it harshly for its few shortcomings in being a baseball simulation, as the game does not carry the all-important MLB license and the development team was obviously not afforded a budget that could compare to what Sony earmarks to “SIE San Diego for MLB: The Show.” Almost all the things that make up the on-field game of baseball are present and accounted for. I noticed a few issues (like the apparent lack of an infield fly rule), but generally found myself locked into the flow of the games.

You only need to spend a few innings with the game to see the love that the development team has for the sport. There are many visual and audio cues that work together to present the game of baseball in a reverent light. The fictional stadiums are well-designed, with each location offering some interesting vistas and ambience that feels like an amped up version of the whimsical magic found across the minor league ballparks scattered across the United States. Unapologetically goofy team names and stadium adornments work to convey the charm of a summer night out at the ballpark.

For those who are unfamiliar with the game of baseball (or simply have no affinity), “Super Mega Baseball 2” still has the guts of an enjoyable arcade gaming experience that is sure to entice just about anyone willing to give it a go. Like the best arcade games, the controls are fairly simple, yet rewardingly deep for those who prefer to dive deeper. Pitching is relatively straightforward, with the right stick used to select a pitch type and the A button to throw said pitch. Aiming pitches is handled with the left stick prior to throwing, while the nuances of accuracy and breakpoints are handled by steering a circular UI indicator towards the initial aiming point. I jumped into my first game, ignoring the tutorial prompts, and managed to get a grasp on my hurler’s repertoire by the end of the third inning. This is a welcome change coming from the ridiculously complex systems found in the modern big budget MLB games.

Batting in “Super Mega Baseball 2” is even easier to pick up than the pitching. The pitches come into the batter’s box with a UI indicator showing their location. To make contact, you need only to use the left stick and position a circle in the vicinity of the incoming pitch and then press the A button. It is reminiscent of the system I first encountered in “Major League Baseball Featuring Ken Griffey Jr.” on the Nintendo 64. Baserunning is fairly easy to pick up as well, though properly juggling more than one runner in close situations can get very hectic. Depending on the level of difficulty chosen, fielding is mostly handled automatically, unless the player prefers to take control after a ball is put in play. Throws could not be any simpler, with the controller face buttons mapped to each of the four bases and a timing-based power meter mechanic sprinkled over the top for the diehards.

The graphics and sound work together to provide an acceptable presentation. Player models are rather exaggerated and it works perfectly in service of the vibe that the game presents. The default teams contain male and female players. Most surprisingly, the female models actually resemble human women rather than the ridiculous 1990’s comic book proportions that typically dominate the video game industry. The PC version of the game performed admirably on my machine, allowing for 4K 60fps gameplay that was perfectly frame-paced. Likely due to the budget of the project, the in-game presentation is a little thin, with no voice overs or superfluous scenes between innings and at-bats. While this prevents purists from taking in the game at baseball’s infamous leisurely pace, the concise nature of the presentation fits the arcade style perfectly.

“Super Mega Baseball 2” allows for full customization of teams, logos, and players. The provided logo editor is robust enough that determined users will be able to crank out an entire league’s worth of first-rate logos in no time. It looks like it should be possible to recreate the entire MLB within the constraints of these tools, and I fully expect folks to have a project like that ready to roll in short order. Sadly, I found no way to easily download or share these customizations from within the game (or if such a thing will ever be possible). The ability to upload and share customizations would do wonders for the shelf life of this game. For those that care about such things, the game does ship with some microtransactions, but they are only in the form of additional art pieces for the customization suite and are not at all required to enjoy the game, nor do they affect gameplay.

Online play, by far the most-requested feature from fans of the original game, works well out of the box. Ranked leaderboard play is restricted to the default teams for balance reasons, but friendly private matches can make full use of customized teams and players. On the PC version, all online business is handled via Steamworks and is as easy as one could hope for. For offline players, exhibition, tournament, and season modes offer different ways to enjoy the game.

Fans of the original “Super Mega Baseball” will find lots to like about this sequel. New players can expect a solid game of baseball with enough arcade magic to appeal to almost any type of player. Baseball purists will find a good time if they enter with the proper expectations. As it stands right now, “Super Mega Baseball 2” is now the top dog of baseball games on the PC. For $30, it’s not quite priced to be an impulse purchase, but should go on the shortlist of any baseball fans or those on the hunt for genuine arcade fun.