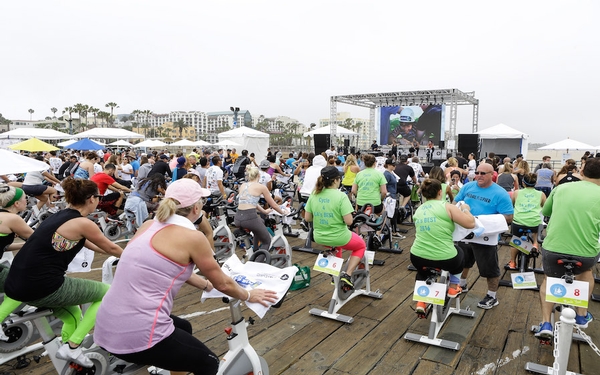 The 8th annual Pedal on the Pier fundraiser returns on Sunday, June 3, 2018, from 11 a.m. - 4 p.m. on the historic Santa Monica Pier. This high-energy outdoor cycling event will feature more than 100 teams pedaling on stationary bikes hoping to raise more than $1,000,000 for underserved kids and families in Los Angeles through The Harold Robinson Foundation. The Foundation provides them with the social, physical, intellectual and emotional impact of a year-round, life-changing camp program.

Pedal on the Pier is a 5-hour spin-a-thon fundraiser with the beautiful Pacific as the backdrop. Relay teams comprised of 1-5 riders on indoor cycling bikes, provided by STAGES INDOOR CYCLING, will enjoy music by rapper and record producer DJ Mustard. Celebrity guest appearances, fun activities, food and drinks from local restaurants such as Porta Via, 1212 Santa Monica, Killer Shrimp, Bubba Gump and Factor’s Famous Deli will keep the fun going. This year’s event will be hosted by actor and comedian Ben Gleib, drummer Nikki Glaspie (Beyonce, Nth Power) and some surprises and special guest appearances.

“What makes Pedal on the Pier so unique is that it’s an energetic outdoor philanthropic fundraising event at an iconic ocean-front location,” said Joyce Hyser Robinson, co-founder of the Harold Robinson Foundation. “It’s an incredible event that nets close to a million dollars, attracts around 1,500 participants and guests while maintaining an intimacy and sense of community that is uncommon at most fundraisers of this size.  The positive energy is infectious, and you can’t help but have a great time while raising money to help kids, schools, and families in LA’s marginalized communities.”

The Harold Robinson Foundation is a 501©3 founded in 2009 by Jeff Robinson, Joyce Hyser Robinson, and David Moss.  The flagship program of the Foundation is Camp Ubuntu where underserved children, their families, and their schools are invited to attend, free of charge; an aca accredited overnight camp in the angeles national forest just 90 minutes outside of Los Angeles.  Many of the kids have never been outside of their neighborhoods, and Camp Ubuntu gives them the opportunity to have a positive experience in a safe and nurturing environment. The retreat packs an incredible amount of fun into a long weekend offering hiking, team building, sports, arts and crafts, music, dance, ropes course, writing workshops, campfires, and more.

The Harold Robinson Foundation’s vision is to provide unity and community through Camp Ubuntu. It began with an idea from co-founder, Jeff Robinson, almost 20 years ago, who believed that every child should have the same opportunities he experienced as a kid, no matter where they stand on the socio-economic ladder.  The Foundation provides the funding and resources needed to send Los Angeles’s underserved children to camp away from the stress that most of them face on a daily basis. In addition to Camp Ubuntu, HRF provides, free of charge, a summer day camp, Camp Ubuntu Watts, in the center of Watts, CA, at Markham Middle School. The summer camp is going into its fifth year. HRF also provides parenting workshops.

Ubuntu is an ancient African philosophy that means, “I am because we are.” The Harold Robinson Foundation has adopted this philosophy as a tool to teach children the guiding principles of the Foundation which are: family, respect, unity, and community. This unifying principle frames all of Camp Ubuntu’s programming. This past year, Camp Ubuntu hosted more than 2,000 students from 20 high-need schools mostly in the community of Watts.

Watch this video for a look at the camp and its overwhelming effects on inner-city kids.

To participate in Pedal on the Pier, riders can register and join a relay team or start their own team which consists of up to five people. Each team must raise a minimum of $2,500 to have a bike reserved the day of the event. Registered riders will receive a free T-shirt, swag bag, a meal ticket, and access to the 21 and over lounge with hosted alcoholic beverages from sponsors. There will also be a cash bar with beer and wine.

Those who are not able to ride, but would still like to show their support for family and friends can attend by donating to a team or a rider.  This year, Pedal on the Pier is offering a limited number of tickets for spectators with a $100 donation to this private event. Spectator tickets include access to the festivities and hosted food and beverages. This will allow fans and supporters the chance to get in on the action and cheer on the cyclers. Spectators can also be a part of the performances, dancing, and kids’ activities.

Doors open at 9:30 a.m., Red Carpet festivities commence at 10:00 a.m and cycling starts at 11 a.m. To sign up for a Pedal on the Pier team or donate to the Harold Robinson Foundation, please visit www.pedalonthepier.com.

Events
#CWABG's "How Are We Curators of the Black American Experience Now?" on 3/25 at 7PM
170 views