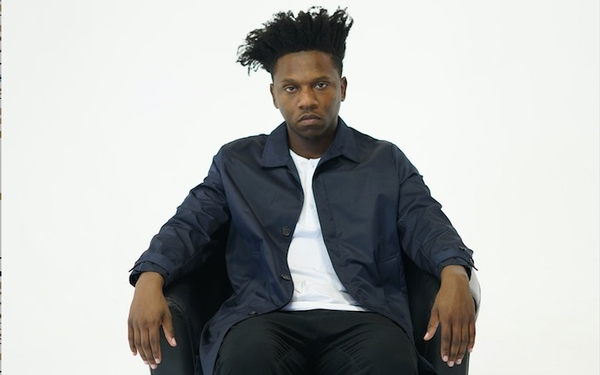 The first thing you notice about Matt Muse is his hair. It appears to defy gravity, his coils stretching up toward the sky in a style that looks both carefully coiffed, yet free.

The second thing you notice is his stage presence.

The 25-year-old rapper spent much of his childhood living on 81st and Kenwood and has been mistaken for 19 — black don’t crack, after all. You only need to speak to him for a few minutes, though, to detect the old soul residing within.

“Lately I’ve been runnin’ from the sorrow,” he raps on “What You On,” a song from his upcoming EP, “Nappy Talk,” scheduled for release in June.

This maturity and the impression that Muse has been through a thing or two permeates every interaction, but he is as charismatic and bright as he is wise and thoughtful.

Muse is a teaching artist with Young Chicago Authors, using hip-hop to teach storytelling to students throughout Chicagoland. He’s performed at rapper Common’s AAHH! Fest, Chicago Ideas Week and on many other stages in the city.

RedEye spoke to Muse about his songwriting process, the exhilaration of performing and what he’s unwilling to compromise in his journey as an artist.

You seem really comfortable onstage. I be chillin’, yeah.

How does that happen? It’s cuz I’m old, honestly. If you wanna be real.

You’re not old!  I’ve been rappin’ for a really long time. I think getting there came from years of practicing. When I was in school, NIU was almost like a test drive and a practice run. I’ve performed 200-plus times throughout the time I was in school so I’m rapping at everything — events with five people, events with hundreds of people. And then honestly, just watching videos of my favorite rappers perform and kind of like, how do I mimic this but also make it my own?

The last and most important thing is when you want something bad enough, you act like you want that s***. And I’m really sick of not being on (laughs). You’re trying to leave an impression. Every time you perform, you’re marketing yourself. So I’m trying to kill shit. Performing is also my favorite part of being an artist.

Why? It’s exhilarating. No. 1, somebody cares enough about what you’re saying to tune their ears to it. I want people to be motivated when they hear my stuff. When I get on the stage it’s my opportunity to be like yo, hear me out. Take this little piece of bars and say it to yourself in the mirror. No. 2 is like, it’s you putting a finished product on that stage, so all that work that goes into making the song culminates when you get to perform it in front of people.

What’s your songwriting process like? I write every day. Not a lot every day, but I come up with punchlines and stuff in my head and I’ve got thousands of notes in my phone of random punchlines. When I actually sit down to write a song I play the beat, turn on the voice note and record a freestyle over the entire beat. The words don’t really be words, I just be making up flows. Then I pick flows and melodies that I like from that freestyle and then write into those flows and melodies. We live in an age where the words you say come second, whereas back in the day the words were first. So you have to be respectful. You’ve got to adapt to change.

Part of your workflow changes to adapt to the current state of music, but how much are you unwilling to compromise? I have one rule really, and that’s just like whatever I’m doing has to be true to who I truly am. If I’m making an adjustment, it’s more based on me knowing how far I want to go with it and knowing that if you limit yourself and you close your mind, you can’t go as far as I want to go.

What I will not allow myself to do is talk about things that aren’t true to who I am. Every single thing I’ve ever said in a song has been something that was real and the older I get, the more true that is. I don’t value fame that much; I value platform and money and that might sound f—ed up, but I have stuff to fund. So anything that’s compromising my money or not paying me my value — I’m not with it. Anything that’s disrespecting any other human being. It’s 2018. We got to open our minds.

No -phobias or -isms. And if anybody does that on a song that I’m on, the song is dead. I try not to work with people who I think would do that. Like, I love women and I interact with women. But it’s like finding new ways to do it where it’s not like oh hella disrespectful. How can I tell this story and almost empower a woman while also talking about a true story? I’m trying to create a sound where you don’t have to ignore the lyrics to enjoy the song.

I’m not ever denouncing somebody. If you love the woman, go crazy, but you don’t have to not empower your own women at the same time. And it’s not enough “yo my woman is black” in mainstream hip-hop. When do you ever hear dude be like, “Yo, my girl black”? It’s, “My girl foreign,” though.

How long have you been writing and rapping?  I started writing raps when I was in high school, so maybe 15 or 16. I had been doodling little stupid stuff before that but seriously, seriously rapping was when I turned 18 when I went to college.

What can we expect from your new release? It’s called “Nappy Talk” and it’s this idea of self-confidence in your blackness or in whatever it is that makes you unique, mine being my hair. Talking about my experience with hair and how up and down it’s been, like, “OK, I need to get my hair cut because I’m finna be in school and I want to get a job.” “Oh I hate school so much, so imma just let my shit grow and say f—- all of y’all and start wearing sweatpants to class.” When I really started to let my hair grow, it coincided with the confidence in myself to release music seriously and to take music seriously. Hopefully, a person listening can be like, “Imma be me and do me.”