It’s the topping that makes the hamburger 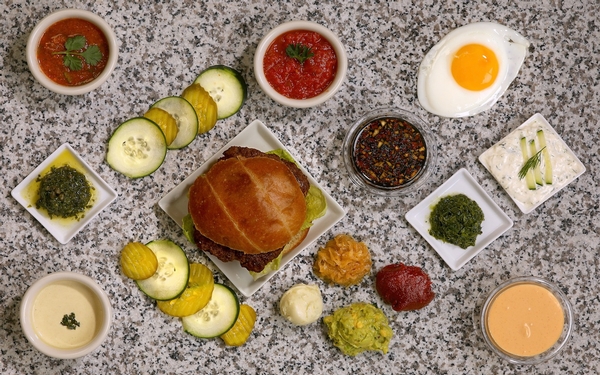 An array of toppings designed to make your burger better, on Wednesday, May 9, 2018, in the Post-Dispatch studio (Christian Gooden/St. Louis Post-Dispatch/TNS)

Anyone can make a hamburger, and they all taste pretty much the same.

Now that grilling season is officially here, the ground beef will be hitting the grill. So how can you make yours stand out?

Here’s a mantra to remember: It isn’t the burger, it’s what you put on top of it. A hamburger is just a hamburger, but a bacon-cheeseburger is an event.

The right toppings can be transformative; they are like the perfect diamond broach on a simple black dress. They are like the chocolate sauce, whipped cream and cherry on top of a scoop of vanilla ice cream.

The best hamburger I think I’ve ever had was at the Deluxe Burger Bar, in College Station, Texas. The hamburger itself was fine — it was a hamburger, and they all taste pretty much the same — but the toppings were superb. It was called a Fiesta Burger, or some such, and it was topped with guacamole, salsa and maybe slices of jalapeño.

With the Fiesta Burger, or whatever it was called, as my guide, I set out to create a burger bar of my own. I whipped up a whole bunch of things that go great on top of a hamburger, with the idea of setting them all (or at least some of them) out for my next grilling party.

But first, I wanted to avoid the obvious. No ketchup, no mustard, nothing out of a bottle that is specifically meant to go on top of a hamburger.

That said, I did use one sauce that came direct from a jar. Gochujang is a hot and subtly sweet Korean sauce made from fermented red chiles and fermented soybeans. It is best known to Americans as the paste in Korean favorite bibimbap that underlies and unifies the diverse flavors in the dish.

If my nose for trends is accurate, and it usually isn’t, gochujang will be the next sriracha — suddenly ubiquitous. It goes well with many things, such as stews, braises and soups, and it happens to be an exceptional accompaniment to hamburgers.

I also used ingredients from jars exclusively in another topping that is every bit as good with hamburger as gochujang. Horseradish-mustard sauce is a simple but unbeatable combination of two parts of mayonnaise with one part each of Dijon mustard and prepared horseradish.

The sauce was invented a few decades ago by Mary Sue Milliken and Susan Feniger, who are still known as the Too Hot Tamales. The sauce has been featured on these pages before (as have several of the other toppings), but I mention it again because it is so spectacularly piquant and good with hamburgers.

A quick marinara sauce may seem like an unusual topping, or at least I hope it does, but it makes perfect sense — and it’s terrific. You can make the sauce in less than an hour, and it adds a rich, tomato tartness to the meat. Consider it a less-sweet form of ketchup or, better still, you can think of the burger as a large, flat meatball topped with an Italian tomato sauce. It works wonderfully.

Staying in Italy for the moment, I also had great success with a green sauce, a salsa verde. This bright-edged sauce is fast to make — because you don’t cook it — and is bursting with flavor from parsley, chives, mint, capers, anchovies, garlic, lemon juice and olive oil. It is a natural companion to any grilled beef, and what is a hamburger if not grilled beef?

A similar sauce, chimichurri, comes from South America, and is even faster to make (though it does require some refrigeration once it is put together). Also great with any grilled beef, it builds on a base of parsley and cilantro with garlic and a chile pepper, plus olive oil and red wine vinegar.

The put-a-fried-egg-on-top-of-everything fad has, thankfully, faded away. But people were topping hamburgers with fried eggs before the fad ever started (maybe that’s even how it started) and they are still doing it now. It is the hamburger version of steak and eggs, and you just can’t beat the flavor when the bright yellow yolk runs down the side of the burger.

Just about everybody has had a cheeseburger, of course, but I wanted to try a hamburger with a very special kind of cheese, a pub cheese. Though it is made from cheddar and cream cheeses, pub cheese is more of a spread than a cheese because of its (not so) secret ingredient: beer.

Blue cheese is often put on burgers to make a sophisticated cheeseburger, but a lot of places use too much; the pungent blue cheese almost drowns out the taste of the meat.

So I decided to swipe an idea from steakhouses: I used blue cheese butter. By mashing blue cheese together with butter, you get a spread that tempers the power of the cheese while spreading it easily and evenly over the burger patty.

I wasn’t sure what to expect from my next topping, but it turned out to be better than I’d hoped. Soy sauce, ginger, garlic and sesame oil is a classic Chinese combination; I thought it might add the right mix of flavors to a hamburger because of the saltiness of the soy sauce. The ginger and garlic added a nice warm bite, and the oil smoothed everything together with the deep bass notes of sesame.

Thematically the opposite sauce of that Asian classic, tzatziki was just as successful on a hamburger. A light and creamy yogurt-based sauce from Greece, with plenty of cucumber and dill, tzatziki trills with shining high notes that make a marvelously good counterpoint to the stolid meatiness of the burger.

One topping is so obvious that I am almost embarrassed to mention it, except that a lot of people overlook it: pickles. It is the slice of pickle, after all, that makes White Castle hamburgers so irresistible, to those of us who find them such. Their bright tang is the ideal foil for the hearty meatiness of a hamburger.

Those who are not fond of pickles may find unexpected bliss in a pre-pickle, a cucumber. Cucumbers are surprisingly complementary to burgers and are not used as often as perhaps they should be. They are coolly assertive, slicing through the burger’s robust umami taste and texture.

Onions are used fairly universally on hamburgers, but few people take the trouble to make them the restaurant way. Rather than serving a raw and astringent slice of onion, you can top a burger with the rich, sweet and intensely mellow flavor of caramelized onions. All it takes is a little bit of oil and perhaps a half-hour of your time. Other than a few occasional stirs, you can go do something else while your onions are slowly transforming into something sublime.

Finally, and at long last, I made my own version of the Fiesta Burger of my relative youth. First, I whipped up a simple guacamole, just enough to get across a cool, creamy richness to play off the burger’s sear and juices.

Then I made a somewhat more complex salsa that is one of the best salsas I know. The tomatoes, onions, garlic and combination of peppers are all pan-roasted before they are blended together into chunky perfection. This step gives the salsa a highly desirable though subtle smokiness to the intensely spiced sauce.

I did not even bother to put the guacamole and salsa on the same hamburger. Each one went magnificently well with the burger on its own.

Note: For best results, use full-fat (whole milk) Greek yogurt. Two percent fat is acceptable, but do not use nonfat yogurt.

1. Grate the cucumber into a mesh strainer. Sprinkle with salt and let sit in the sink or in a bowl to sweat out the moisture for 30 minutes. Squeeze out as much of the remaining moisture as you can with paper towels.

2. In a medium bowl, combine the yogurt, garlic, dill, olive oil and vinegar. Add the strained cucumber and stir until combined. Taste and adjust seasoning if necessary. Store in the refrigerator for at least a couple of hours to allow the flavors to combine.

Heat oil in a small pot over medium heat. Add onions and season with salt to taste. Cook slowly, stirring frequently, until onions turn a rich amber color. This may take 30 minutes.

Place garlic, chile, cilantro, parsley and red wine vinegar in a food processor and process until finely chopped. Add oil and process again. Season to taste and refrigerate until serving.

1/4 teaspoon salt, or to taste

Place all ingredients in a bowl and mash together with a fork until thoroughly mixed and it is the texture you want.

Heat oil in a small pan over medium-high heat. Add onions and sauté until soft, 3 to 5 minutes. Add tomatoes with their juice and the oregano, using a potato masher or a large spoon to crush the tomatoes. Bring to a simmer, lower heat and cook, stirring occasionally, until it forms a thick sauce, 45 to 50 minutes. Salt to taste.

1. Place a large skillet or skillets over medium heat. Add the peppers, tomatoes, garlic and onions (you may wish to do this in batches). Cook, turning frequently, until they soften and the skin begins to blister all over. When cool enough to touch, peel and discard the skins. If less spicy heat is desired, remove some or all of the seeds from the peppers.

2. Place the peppers, tomatoes and garlic in a blender or food processor and blend until the salsa reaches your desired texture. Chop the onions and add, along with the optional cilantro. Season to taste with salt.

Mash butter and cheese together with a fork. Refrigerate before serving.

Chop the parsley, chives and mint, and mix in a bowl with the other ingredients. Season to taste.

Put soy sauce, ginger and garlic into a small pot over low heat. Cook 10 minutes, but do not allow to simmer. Stir in sesame oil and remove from heat. Strain before serving.

Mix ingredients together in a small bowl.

Recipe
Missing movie theater popcorn? Here's how to make it at home.
725 views