12 days to explore the ancient wonders of Egypt 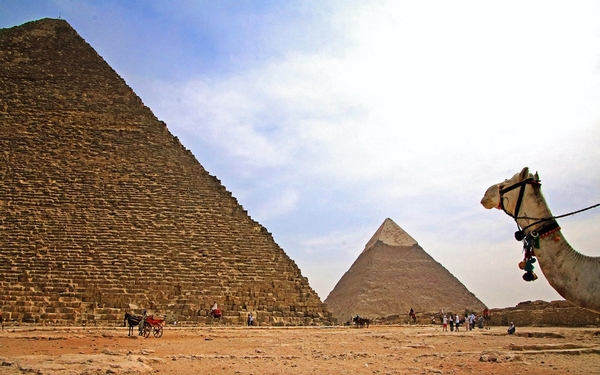 The Great Pyramid, left, is the only standing monument of the "Seven Wonders of the Ancient World." (Norma Meyer)

Let’s hope the “mummy’s curse” isn’t real. Because I’m sweatily crouching through a claustrophobic 125-foot-long tunnel inside Egypt’s iconic Great Pyramid on my climb to its 4,500-year-old royal burial chamber. Dangling from my necklace is an amulet charm — the protective Eye of Horus — because you can’t be too sure in this myth-mesmerizing land of powerhouse pharaohs and ominous gods.

“People feel strong energy inside the pyramid,” forewarns Mohammed Bayoumy, an Egyptologist who is my G Adventures guide. “It is the last standing monument of the seven wonders of the ancient world.” He notes that within the conical confines, scientists have discovered a magnetic field that can supposedly cure diseases, sharpen a dull razor in a week and preserve an apple for two weeks unchanged. (Stay tuned.)

For 12 days, it seems like I’m on a movie set as our G Adventures’ small-group tour explores grandiose temples, magnificent tombs, ghostly catacombs and well-preserved dead bodies of Egypt’s extraordinary, sophisticated, age-old civilization. I’m blown away by the sheer volume of mural-emblazoned, hieroglyphic-embellished monuments that whisk us back to when VIPs were a cow-headed goddess, a vulture-headed god, a sky goddess, a falcon-faced god (that would be Horus, who lost his eye battling evil) and hundreds more of their mystical ilk. We’ve entered a long-vanished world — or underworld. At the necropolis Valley of the Kings, I descend to King Tut’s famed subterranean tomb and get the willies staring at his humanlike mummy with buck teeth. Along the palm-fringed Nile River, we amble through an elaborate colonnaded shrine dedicated to Sobek, the revered crocodile god; it’s here we gape at a dozen unwrapped crocodile mummies, some once adorned in lavish jewelry.

As for the living, Egyptians are very welcoming. Locals keep asking me to pose with them for selfies — in this Muslim country, a white American woman (me) is a novelty for a giggling crush of cloaked hijab-wearing teen girls at the island Philae Temple and for soccer-playing boys outside an Arabic McDonald’s. Tourism, still plagued by terrorist fears, is slowly rebounding after plummeting following Egypt’s 2011 political uprising and subsequent Islamic extremist attacks. I never feel unsafe. My biggest worry are the gantlets of notoriously aggressive souvenir peddlers who drape you in Queen Nefertiti-print scarves and other wares before you blink. One evening, in what could be a scene from a Marx Brothers comedy, I frantically sprint through Luxor’s open-air bazaar with a string of kaftan-clad vendors in pursuit waving alabaster bowls, T-shirts and Tut figurines. (Lesson learned: Never answer “Maybe” when asked “Maybe later?” and then go back the same route. They await.)

You’ll be up for the challenge if you get to Egypt the way I did — by being pampered like Cleopatra. Let me digress. It’s not a chariot, but after departing Los Angeles, I devour a four-course, above-the-clouds, wine-paired “candlelight dinner” in business class of Turkish Airlines’ 13-hour nonstop flight to Istanbul (yours for 45,000 Star Alliance reward miles) before connecting to Cairo. (And don’t worry. The flickering votives are battery-operated.) The foodie feast is prepared by “Flying Chefs” donning white aprons and toque hats in the cabin, a sight itself. By the time I land, I have been massaged by my own lie-flat chair, have been schooled by Dr. Oz-stamped be-healthy-while-airborne videos, have ordered from the “wellness” menu a rooibos-lavender-date syrup tea that combats jet lag, and sawed logs. Bring on the pyramids!

The triangular edifices are just the beginning of our antiquities adventure. Even more astonishing are the dual rock-cut temples of Abu Simbel, spectacularly carved into a mountainside and erected for Ramses II, the dynamo Pharaoh who ruled Egypt for 67 years. Four 65-foot-tall figures of the seated Pharaoh theatrically flank an entrance, and along the mural-relief-covered interior, the omnipotent king is shown grasping vanquished enemies by their hair.

“He was a very busy man. Why? Because he had 86 wives and 127 kids,” Mohammed says. As we quickly learn, ancient times are their own soap opera.

Abu Simbel is about a three-hour drive from where we’re overnighting near the Sudan border in Aswan. That area is home to many of Egypt’s dark-skinned Nubian people, one of the world’s oldest civilizations. Late afternoon, a turban-clad, galabiyya-robed Nubian named Ashraf Sahloul — who enjoys reggae music and dubs himself “Captain Hash” — sails us on his traditional felucca, a one-mast boat that glides across the shimmery Nile. “How are you? Happy, happy, good, good,” the father of three declares, as a marijuana-themed flag flaps from the stern. Afterward, we hop into the bed of a Nissan pickup truck to travel through Ashraf’s Nubian village, its mud-brick houses brightly painted mustard-gold and lavender-blue. Women in full-length black niqabs walk the dusty street, donkeys plow verdant fields, and excited children shout “Hello, hello!” to us. At Ashraf’s family home, we recline on floor pillows in the sand courtyard and drink signature cold hibiscus tea as the melodic call to prayer reverberates from a mosque.

The following morning in Aswan, we board a 70-cabin river cruise ship for a three-day picturesque Nile journey that ends in Luxor, the “world’s largest outdoor museum” (the city boasts one-third of the planet’s ancient monuments). The Luxor Temple, illuminated at night with its lengthy avenue of human-headed sphinxes, is absolutely magical.

I’m an Egyptophile in no time. Outstanding guide Mohammed verses us on such tidbits as these: The Pharaohs’ beards were fake and strapped on (made of real hair, the goatees were believed to have divine attributes), mural artists created black paint by frying insects, and a favorite national dish of Egypt is koshary (a heated vegan mix of lentils, pasta, garbanzos and rice, topped with french-fried onions and tomato sauce — it is delicious!).

Just don’t eat much before you visit the two royal mummy rooms at Cairo’s renowned Egyptian Museum. Actually, I’m fascinated by how more than 4,000 years ago, to preserve a body for the all-important afterlife, Egyptians drilled a hole in the brain to suck out liquid, removed internal organs, soaked the corpse in salt for 40 days, filled it with resin, and wrapped it in layers of linen. Thanks to those efforts, I can scrutinize noble mummies — many miraculously with fingernails, hair and teeth intact — including the Ramses dynasty bigwigs and crafty Queen Hatshepsut, the female pharaoh who in life dressed like a man so followers would accept her as king.

Many of the mummies were discovered in Luxor in the vast Valley of the Kings, a graveyard for over 500 years of Egyptian history and more than 60 tombs. The handful we enter are stripped of their gilded riches and relics but retain exquisitely detailed wall reliefs. In King Tut’s chamber, the “boy Pharaoh” who was once entombed in a golden sarcophagus now lies inside climate-controlled glass mummy toes-up, an unbelievable specimen of Egypt’s exotic past.

On the outskirts of chaotic Cairo, we don’t solve the riddle of the ginormous half-man half-lion Sphinx, its paws the size of semi-trucks (and its vacant eyes gazing at a Pizza Hut). But it’s easy to understand why the world’s first and hugest monolithic statue supposedly terrified worshippers so much that someone whacked off its nose to lessen its powers.

Nearby is the celebrated trio of Giza pyramids, anchored by the Great Pyramid built 481 feet high for Pharaoh Khufu. It took 2.3 million multi-ton limestone blocks, 20 years and 100,000 laborers but “how the pyramid was constructed still remains a mystery,” Mohammed says, against an atmospheric backdrop of robed locals offering camel rides in the desert sands.

Soon, I’m bent over, trudging through a dank, chiseled, narrow passageway inside the enduring engineering fete. The climb continues in a darkened shaft with a 150-foot-long steep ramp of wood stairs, then another short tunnel to as far as tourists can go — the rather plain, granite-walled, flat-roofed King’s Chamber midway up the Great Pyramid. The only object in the haunting room is a broken empty stone coffin where Khufu was interred 4 millennia ago.

I’d like to tell you I have a pyramid power buzz. But I’m just lightheaded from the stifling air and remembering the Pharaoh’s body was never found. Before turning back, I touch my Eye of Horus necklace and happily reach in my pocket for the tiny good-luck scarab beetle that a vendor insisted I buy.

(Meyer is a freelance travel writer.)