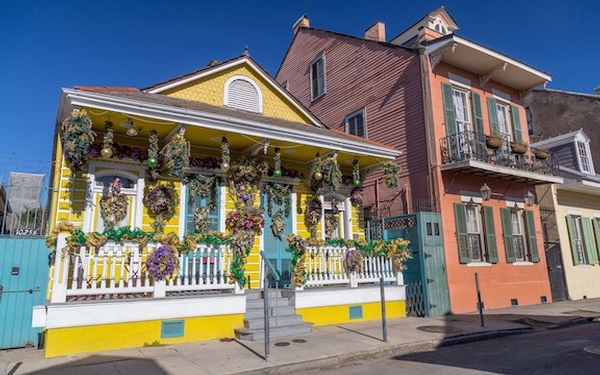 As if New Orleans needed to give visitors another reason to party, the city celebrates its 300th birthday this year.

That means non-stop tricentennial events, parades, exhibits and more on top of the Big Easy’s already packed calendar. America’s most unique city draws tourists for its culture, food, cocktails and festivals — and keeps them coming back by embracing its rich history while continuing to evolve.

Perhaps no Nola neighborhood is changing more than Bywater, home to pretty pastel-painted Creole cottages and a thriving arts scene. It’s known for quirky spots like The Country Club (634 Louisa St., thecountryclubneworleans.com), a pool clubhouse and restaurant famous for its Saturday “Drag Brunch.”

Bywater started exploding in the years after Hurricane Katrina hit in 2005, when the floodwaters that devastated other parts of New Orleans did not reach the slightly elevated nabe. Locals have mixed feelings about the influx of newbies and businesses, since it’s led to exciting new restaurants and projects, but has also changed the feel of the area and priced out some longtime residents. For now, charming Bywater still maintains its edge.

After taking a stroll through scenic Crescent Park — which stretches along the Mississippi River — walk over the arched rust colored Piety St. footbridge to Chartres St., then head east till you hit Bacchanal Wine (600 Poland Ave., bacchanalwine.com).

It’s a wine shop with a massive backyard and stage for live music and a great place to hang out, day or night. There’s a bar upstairs that offers scheduled wine tastings. Or just pop into the shop, select your favorite bottle of wine, order food, then grab a table in the back and enjoy some tunes.

The short but tasty menu includes everything from bacon-wrapped dates ($10) to braised pork shoulder ($12). But locals know they can also just pick their choice of cheese and charcuterie from the fridge, and staff will plate it with some bread, olives and jams for you.

Another Bywater hotspot to grab a drink is Parleaux Beer Lab (634 Lesseps St., parleauxbeerlab.com), a taproom and microbrewery with a yard that’s dog- and kid-friendly.

It’s worth spending at least one whole day exploring Bywater, but don’t skip Nola’s crown jewel — the French Quarter. First, tackle some basics: a walk through Jackson Square and photos in front of St. Louis Cathedral, the oldest in the country; beignets and chicory coffee at Cafe Du Monde (800 Decatur St.); grab gator jerky and nearly anything else at French Market (frenchmarket.org); sit at the bar at Carousel Bar & Lounge, which slowly spins like a merry-go-round.

Then, it’s time to get weird. Walk around and discover oddities like the New Orleans Historic Voodoo Museum (724 Dumaine St., $7 admission, cheaper for kids, students, seniors), a tiny two-room collection of voodoo relics, sculptures, religious statues and other artifacts related to rituals, zombies and more. Many are draped with dollar bills, an offering guests serve up while making a wish.

They don’t call this Louisiana city the Birthplace of Jazz for nothing. Originating here in the late 19th century, the genre can be appreciated at several spots today. Attend a performance at The Jazz Playhouse (300 Bourbon St.), an upscale lounge in the Royal Sonesta New Orleans. Guests can reserve preferred seating for $20, plus a one drink minimum, but walk-ins are also welcome if there’s room. The live music’s the real draw, but the menu’s also worth applause.

To brush up on history, head to the New Orleans Jazz Museum (400 Esplanade Ave.), which boasts the world’s largest collection of instruments owned and played by jazz legends. Housed in the Old U.S. Mint — the only building to have produced American and Confederate money — you’ll find relics like Louis Armstrong’s first cornet. The Nola-born trumpeter played the Champion Silver Piston as an adolescent at the Municipal Waif’s Home for Boys, where he was sent after shooting a pistol on New Year’s Eve.

The museum’s also home to sheet music, thousands of recordings, and best of all, it continues to celebrate music by hosting festivals and hundreds of concerts a year — in its Performing Arts Center and on its grounds.

A good home base for your trip is The Jung Hotel & Residences, which reopened in December after extensive renovations. It first debuted in 1908, was added to the National Register of Historical Places in 1982, and was bought by the New Orleans Hotel Collection after Katrina.

Situated on upper Canal St., a Central Business District strip being revitalized with new developments, the Jung puts guests just west of the French Quarter and away from the bustle. The chic, vast lobby area is dotted with living-room like nooks for relaxing and has a bar. Take a dip in the rooftop pool — heated in winter and chilled in summer — before heading out for the day. Or grab a meal in the lobby restaurant, where lunch options include Pontchartrain Shrimp and Grits, a mix of grits, fresh Gulf shrimp, andouille sausage, and Cajun gravy for $15.

If you’re soon headed to the Crescent City, a good starting point is The Historic New Orleans Collection (hnoc.org). There, “New Orleans, the Founding Era,” an exhibit running through May 27 at the 533 Royal St. building in the French Quarter, helps explain the city’s fusion of European, African, Caribbean and Native American influences evident everywhere from the city’s architecture to its cuisine. It does this with artifacts, maps, archaeological finds and art that belong to the museum or are on loan from institutions across the country and Europe.

There’s a watercolor of the French Quarter from 1726, 18th century bear paw moccasins recovered in Louisiana that belong to a Paris museum, propaganda posters that were designed to lure French and German immigrants to move to and invest money in New Orleans, and logs of ships carrying slaves from Africa with details like the ages of all who embarked and who survived the rough journey, including young children.

Interactive elements are even more moving, with touch screens that let you listen to the stories of different slaves and reveal their fate.

This fall, the museum will open its third French Quarter campus, 12,000 square feet of new exhibition space, a cafe, and a shop in the 19th-century Seignouret-Brulatour building (520 Royal St.). One of the exhibits on deck for autumn is “Art of the City: Postmodern to Post-Katrina.”

The Warehouse District is another area worth exploring, as industrial brick buildings have been converted into galleries, hip restaurants and hotels.

Among the best of the bunch is Compere Lapin (535 Tchoupitoulas St.), an eatery opened in 2015 by “Top Chef” runner-up Nina Compton. The name is French for “brother rabbit,” and the animal is evident on the menu, which combines Caribbean and New Orleans flavors.

Playful cocktails include The Copper Bunny — served in, yes, a copper bunny — a $20 mix of Absolut Elyx, pineapple jalapeno tequila, ginger, lime and Mumm champagne; and the Andromeda ($12), which has a foam pink bunny sprayed through a stencil atop a blend of pisco, green chile vodka, lime, grapefruit and rose. Apps and entrees range from Cold Smoked Tuna Tartare ($16) to Curried Goat with sweet potato gnocchi and cashews ($28). But the seemingly simple Brussels Sprouts Caesar ($8) will blow your mind with its intense flavors.

Over at Flamingo-A-Go-Go (869 Magazine St.), which debuted in December, everything screams laid-back and fun. Colorful drawings of the wading bird deck the front of the building. Dishes range from a Grilled Chicken Cuban ($10) to Marinated Blue Crab Claws ($12), and bright drinks include the Prickly Pear, $8 and filled sweet cactus juice, Patron Silver, agave nectar and ginger beer. But the real attraction is the sprawling backyard space, filled with seating — one table sits on the flatbed of an army truck — and pink faux flamingos perched on trees and drinking from fountains.

Signs that New Orleans is still bouncing back after Katrina are evident at spots like Gabrielle Restaurant (2441 Orleans Ave.), which reopened in October — a dozen years after Hurricane Katrina shut down its original Esplanade Ave. location.

Serving Cajun food and known for its Slow Roasted Duck ($28), and Peppermint Patti ($8), both back on the menu, the homey spot is more known to locals than visitors. Now tucked in the area of Treme, not frequented by tourists, the restaurant’s revival symbolizes the city’s resilience, and ability to reinvent itself while preserving its past.

Stay: The Jung Hotel & Residences (1500 Canal St., junghotel.com) offers starting rates this summer as low as $119 a night on weekdays. A “Summer in the City” package, which runs through September, includes a welcome drink and free breakfast for two, along with free parking and starts at $149.