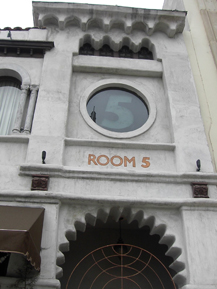 Comedy clubs line the streets of L.A. Each turn beckoning offers of improv classes and stand-up shows. And yet, I never get sick of experiencing good comedy. "Good" being the imperative word here.

Everyone knows that comedy shows can be tricky. You want them to be good, you want to laugh and have a great time. But it‚s not that simple. Any comedian will tell you, stand-up is hard. That is why I get so overjoyed when I find a club that features genuinely funny comics and offers its patrons a great show.

No Name Comics is my latest discovery. Housed in the cozy Room 5, the club sits right above the restaurant Amalfi and offers a full bar and complete dinner menu. The venue is small and dark and the dimly lit bar is a great place to chill with some cocktails. Round wooden tables are dispersed throughout the room, each kissed with a small flickering candle.

The atmosphere is upscale and the smaller space makes for an intimate show. But it is not the venue that the late-night comedy club hoppers show up for, it‚s the talent. The line-ups vary from week to week but always feature the two comics who got this ball rolling ˆ Brad Stewart and Ethan Pavone.

Stewart hosts the show and pops in between each performer to throw out a couple one-liners and keep the crowd rolling. Pavone does his set later in the show, toward the end. It is clear that these two guys love what they do and love the No Name Comics.

Contributing their blood, sweat and tears, Stewart and Pavone created No Name Comics with the hopes of featuring some of the best comics you‚ve never heard of. They were frustrated with the lack of stage time and attention they received at the big comedy stops in L.A. They decided to take matters into their own hands and start a show where good comics would be given the time and respect they deserve, regardless of how big of a name they were.

As their logo states, No Names. No Frills. Just Funny. I would have to agree with that.

The late-night line-up featured at No Name Comics boasts comics with resumes that include working for Comedy Central, Howard Stern, "Jimmy Kimmel," MTV and "Real Time with Bill Mahr."

A few jokes may have fallen flat here and there but all in all the show was solid and the performers kept the audience laughing.

There are few things I love more than a good laugh. It is something I am willing to go to a comedy club for and fork out the dough for an hour and a half show. But this time I didn‚t have to, because No Name Comics is a free show. Every Thursday night ˆ no charge, with the exception of the two drink minimum.

Stewart and Pavone have stumbled onto something here: a free night of comedy in Hollywood featuring some great talent and promising a chuckle or two. It doesn't get much better than that!