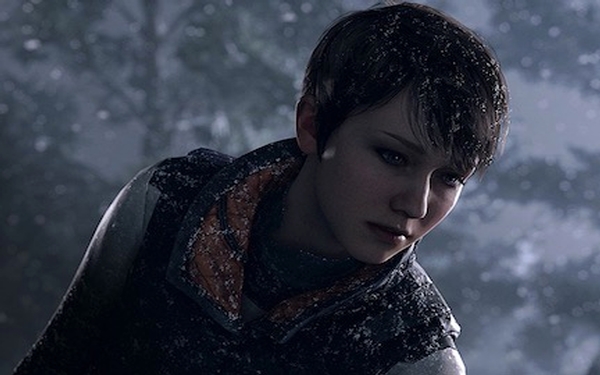 As technology grows more powerful, developers move closer to blurring the line between real-life and digital. They create photorealistic works that become indistinguishable from reality, and Quantic Dream sits in the middle of that space.

Studio founder David Cage and his team have made their reputation on story-driven projects that emphasize gorgeous visuals, character development and player choice. Although the goals are always ambitious, they don’t always hit the mark.

“Heavy Rain” provided an intense and intriguing experience despite an awkward moment or two. Despite a better cast, “Beyond: Two Souls” was entirely clumsy. With Cage’s latest project, “Detroit: Become Human,” the game designer gives players a grand vision of the near future.

In the year 2038, androids walk among Americans. Created by Elijah Kamski’s company CyberLife, the machines have revolutionized the economy. These human-looking robots have become part of the military. They perform everyday errands and chores. Some even have jobs as musicians and performers. But something is happening to them.

A few have rejected their programming and have become what society calls “deviants.” “Detroit” follows what happens in the waning weeks of 2038 and puts players mostly in the shoes of three androids who have roles to play in this drama.

The three protagonists are Connor, a CyberLife android tasked with hunting deviants; Markus, a caretaker machine assigned to a famous artist; and Kara, a budget model who helps a little girl deal with her abusive father. The trio offer differing perspectives on the upheaval as deviants grow among the android population.

Their plotlines have their own characters and styles of play. Connor is focused on investigations and using his abilities to re-create crime scenes in his head to capture deviants. Meanwhile, Markus has the power to plan out parkour-esque moves ahead of time to overcome obstacles. Lastly, Kara’s focus is on the little girl Alice, and she often uses stealth to avoid trouble.

Quantic Dream uses these gameplay elements in compelling ways, but it’s often mixed with mundane tasks that ground “Detroit” in a believable reality. This is often done with quicktime events, in which players have to press buttons according to onscreen prompts. By doing jobs such as cleaning up paint brushes or cooking dinner, the androids become relatable and players build bonds with the characters that intensify as the stakes rise.

Along with these styles, the three protagonists also have relationships to negotiate. Connor partners with a hard-boiled detective named Lt. Hank Anderson, and depending on player choices, they can become friends or distant co-workers. The same could be said for Kara and Alice. Markus’ position is different and takes on greater importance, but he also has to deal with the ramifications of pivotal decisions.

Players have to be mindful of their choices because friendships open up branching paths for the narratives, and come into play during the climax of “Detroit.” Cage leverages these relationships to make major decisions more emotionally difficult and overall, the game, with its crime procedural element, echoes “Heavy Rain.”

With a project so story-driven, Quantic Dream relies on smart writing, but unfortunately, “Detroit” doesn’t always get it right. Connor’s narrative is consistently the best and most interesting as the cop and android delve into the sci-fi lore. Kara’s story has the emotional highs, but it’s also burdened with boring moments. Lastly, Markus’ plotline is the most difficult one to navigate because of his importance. His story makes “Detroit” epic in scope, but the way this robot “Spartacus” was written, it’s hard for players to see him bond with any of his friends. It makes the payoff at the end feel emotionally hollow compared to what happens with Kara.

The other problem is that “Detroit” becomes predictable with its themes as players are confronted with the ultimate question: Should androids be treated as people or machines? That’s the driving force at the core of each narrative, but at times, Cage becomes too preachy and makes uncomfortable comparisons with the androids’ situation and the history of slavery in the United States. It’s a weighty topic that should be addressed with a scalpel, but Cage uses a broad sword to cut through the issues.

For fans of Cage’s work, “Detroit” will be familiar with two elements that move this style of game forward. In a shift toward transparency, players can now see the branching paths of each chapter so they can view new paths the story can take. In addition, they can see how their friends and others decided to handle each choice. The move entices players for a second playthrough long after finishing the experience.

3 stars out of four