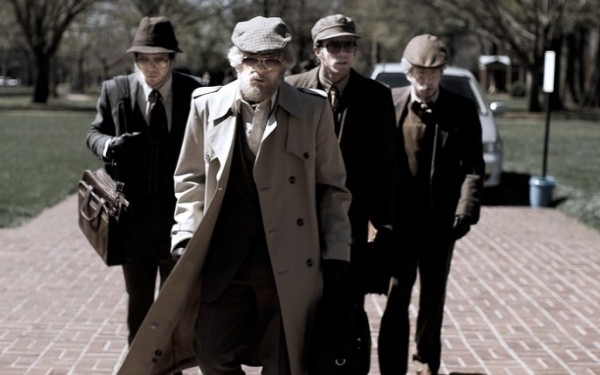 Caged or not, animals and humans alike are constantly looking for a way out. Whatever reality we are beholden to often becomes a mechanism of suffocation and imprisonment, no matter how privileged a reality it may actually be on some wider scale. Bars are bars are bars. Some can fight their entire lives to pry them wide open and never succeed. Some can barge out in one try. In 2004, for four particular young men, the bars of their white, upper-middle class lives were thick enough to drive them to most drastic measures: attempting one of the biggest art heists in U.S. history. In his first (kind of) narrative film, American Animals, writer-director Bart Layton (The Imposter) brings to life what it means to reach through the metaphorical bars for something more--anything more--with the accepted risk of landing behind actual ones.

There are many iterations of this tale, but American Animals has a particular sense of restlessness and anger coursing through its veins that drew Layton to its doorstep. How desperate must these college-educated kids with completely clean criminal records be to want to steal some of the most valuable books from a small Kentucky university library and harm people in the process?

Using what he knows best, Layton realized that incorporating elements of documentary could be the way to shift American Animals’ narrative away from normal heist movies and into the psychologies of the young men in question. We, the audience, suddenly start to blur the lines between the dramatization of Layton’s film and the hellish realities they pushed themselves into, especially in scenes that put the real and fictionalized characters next to each other. So, without further ado, let’s meet the four.

The film opens to the real Spencer Reinhard, a shy, sensitive artist trying to frame just how this whole thing began. He hardly looks into the camera. He’s ashamed. He says it was his best friend Warren Lipka’s idea. Layton then pans to the real Warren, a loud, charismatic, but frenetic young man whose big white smile is hard to not get charmed by. He doesn’t remember the heist as being his idea. It was Spencer’s brainchild. From this point onward, Layton presents the simple fact that American Animals is based on a true story, yet what exactly is true will depend entirely on conflicting testimonies and then the beliefs of the audience. Crafted in a tongue-and-cheek manner right of the bat like this, Layton lays out a titillating doormat for his audience.

Barry Keoghan (Dunkirk, The Killing of a Sacred Deer) and Evan Peters (American Horror Story, X-Men: Apocalypse) star as Spencer and Warren respectively, standing as two best friends who classically couldn’t be more different. Immediately, both characters are painted as restless, unwilling to be satiated by the pursuit of their college degrees from two different prestigious Kentucky universities. Spencer cannot answer his professor when he asks what drives him as an artist. To Spencer, in order to be a true artist, you have to experience trauma and tragedy. He has never experienced either. Keoghan, in this first scene of his, does an impeccable job of appearing completely uncomfortable in his skin, like watching the currents silently shift underneath the surface. Warren, on the other hand, knows he doesn’t want to live any ordinary life and simply honor his soccer scholarship, so he shows it by acting out in sporadic ways, like stealing slabs of beef from a restaurant’s meat locker just to stick it to the man.

The turning point, however, is simple enough. Spencer, while on a tour at his college Transylvania University’s special collections library, home to some of the most precious books in the world, stops in his tracks at painter John James Audobon’s masterpiece The Birds of America. Librarian Betty Gean Gooch, played by the magnificent Ann Dowd (The Handmaid’s Tale), touts it’s value as one of the most expensive books to ever exist. Spencer mentions this book to Warren, somewhat offhandedly, he thinks. Warren believes he only told him because he wanted to do something about it. And so, the cogs of an art heist start turning and they naturally they’ll need more hands on deck.

They recruit two more young men who find discomfort in their predictable existences: Eric Borsuk (Jared Abrahamson, Travelers), an accounting major who wants to do anything but accounting, and Chas Allen (Blake Jenner, Everybody Wants Some!), a fitness fanatic and business owner who is always down to make another quick buck. Cue a montage of the boys watching Ocean’s 11 for research and you’ve got qualified robbers. Right?

As the two central emotional points of the film, Keoghan and Peters both magnetically push and pull us into empathy and madness. Both are extremely different in how they personify their characters' struggles, but both wear it on their face and in their body with extreme provocativity. Just as the chemistry of their friendship, the polarizing nature of their personalities provides a tense landscape for the actors to explore on screen, and they do so with full gusto. Abrahamson and Jenner, as third-act actors, surprisingly fill in gaps we didn’t know were there, pouring out some serious emotional heft in there relatively short times on screen.

The problem with both the morality of the crime and the making of a movie depicting the crime, however, is that there’s little motivation behind it other than dissatisfacton and misdirection. As the real librarian Betty Gean Gooch testifies, all four young men had supportive families, ongoing college educations, and rich futures ahead of them. If they wanted more of themselves, why not pursue that in a way that benefited others, rather than hurt them? Obviously, American Animals is there to explore the remorse that the young men, both real and fictionalized, felt and continue to feel after everything goes down.

And yet, it is hard to not feel ironic about the simple fact that the movie was made about these men, that they get to be on screen and their stories told after being sent to prison, that they got exactly what they wanted. Boosted by a failed heist and spending years in jail, each one now gets to try life again but with trauma in tow. Motivation is now there, just not in the shape and form they expected. It’s hard to shake how frustrating it is watch these men throw away their privilege without considering the luck of their draw. This isn’t a fault of Layton’s or of the film’s in general, but it is an irony worth considering and pausing over.

That being said, American Animals is filled with generous considerations of desperation, ego, privilege, ignorance, and also the playfulness that comes with making mistakes when young. A solid first go for Layton, and a cast that doesn’t hold back in its foolhardiness nor its fear, we are excited to see what cages this filmmaker can rattle in the future.