The glorious food of Morocco 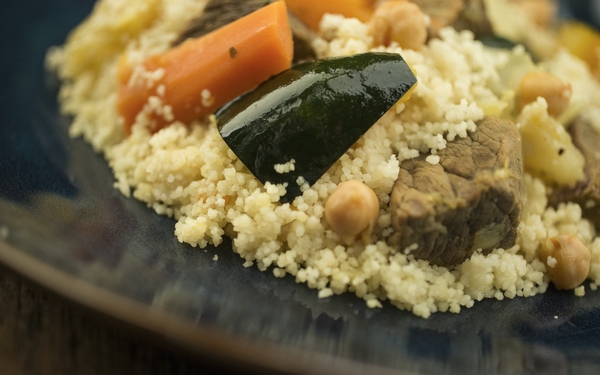 Morocco travelogues of the 1940s and 1950s were inevitably titled “Morocco: Land of Mystery” or “The Riddle of Morocco.”

But surely you can learn all you need to know about any country just by cooking and eating its food.

Much Moroccan food is cooked slowly, methodically — even thoughtfully. The flavors have a long time to build and meld and blend together until they become a singular taste; you can no longer distinguish the individual ingredients.

There is an art to making many of the classic Moroccan dishes, almost a ritual. Couscous — the tiny pasta that acts like a grain — is perhaps the defining dish of the country, where it is eaten every day. It is prepared with much effort in a special pot called a couscoussier and is steamed three times before serving.

Moroccan mint tea is also something of a ritual — there is more to this sweet, minty tea than mere tea. For Moroccans, the tea takes on extra significance when it is shared with others; the cup of tea becomes imbued with all of the culturally critical aspects of hospitality.

If nothing else, Moroccan mint tea tells us one thing about the country and its inhabitants: They like their tea sweet. Very, very sweet.

I took a culinary tour of Morocco by cooking five classic dishes. One taste of each is all you need to know why Moroccan food is considered one of the most popular cuisines in the world.

I began with perhaps the most iconic of the country’s many iconic dishes, Couscous with Seven Vegetables. In many homes, it is served every Friday. I made mine with stewing beef, but you could also use lamb or just keep it vegetarian.

If you like complexly flavored food, you’re going to want to make it.

All of that flavor does not just come from the seven vegetables of the name (carrots, sweet potatoes, turnips, zucchini, cabbage, squash and chile pepper, or any substitutions you want to make). Much of the amazing taste comes from the irresistible combination of spices that give the dish its punch: ginger, turmeric, parsley, cilantro and saffron.

If you mix those ingredients together with some beef, onion, tomato and water, you end up with a powerfully spiced — but not hot — broth that will gladden your soul.

And don’t worry about the ritual of steaming the couscous three times. I’m sure that tastes amazing, but I just used the instant stuff from a grocery store, and it was great.

For a delightful contrast, I next went with something bright and light, a Moroccan Orange Salad.

This dish is deceptively entrancing; easy to make, yet with an unexpected taste. It is just slices of orange in a lightly sweet, cinnamon-orange sauce. The sauce is just a bit of orange juice heated with sugar or honey, cinnamon and orange blossom water. I didn’t have orange blossom water, so I simply added orange zest to water, which isn’t the same thing but is an adequate substitution.

Then the oranges are topped with shredded mint and a few chopped pistachios. Though the dish is made with only a few ingredients, each one adds its own kick.

I next went with another traditional offering, a lentil soup called Harira that is most often served during Ramadan but is also popular throughout the year.

Harira has everything you would find in most good lentil soups (onion, garlic, ginger, cumin, cilantro, celery leaves or celery), plus a couple of curve balls that make it uniquely Moroccan.

Saffron, for one. The famously expensive spice adds a heavenly, exotic perfume and flavor, especially when paired with cinnamon. These two spices are sometimes paired together for tea, but they are only brought together for lentil soup in Morocco. The combination can be habit-forming.

A great soup needs a great bread, and many different types are made in Morocco. I baked the most basic, a plain Khobz, which is made with white flour.

Khobz (the word refers to bread that is baked in the oven, as opposed to on the stove) is a thin, flat bread that is neither as thin nor as flat as flatbread. It is easy and relatively quick to make (it only rises once) and has a simple, uncluttered taste.

You might even call it bland, which is fine. Actually, it’s ideal. Khobz is used to sop up spicy sauces; it complements them, rather than competes with them.

Khobz is almost required with one more national dish, the famous tagine. A tagine is actually the conical-shaped, earthenware pot that the stew, which is also called tagine, is cooked in. The shape presumably helps to blend the flavors.

I made a tagine of Moroccan Lamb with Apricots, Almonds and Mint, only I didn’t use a tagine to cook it in. I have occasionally thought of buying one but never have because they cost a lot more than you would think, especially at those high-priced shopping-mall kitchen stores.

And besides, you don’t actually need a tagine to cook a tagine. I made mine in a pot on the stove, and it was spectacular.

You can never go wrong with slow-cooked lamb anyway, but this version has something that makes it special: sweetness.

It isn’t very sweet or even too sweet, it is just a little sweet from the dried apricots, a splash of orange juice and a sprinkling of fresh mint. And a bit of sweetness turns out to be just the thing to play off of the meaty lamb and the rich almond sauce.

It’s a hearty dinner you will want to add to your repertoire. And there’s nothing mysterious about that.

Grated zest and juice of 1 orange

Steamed broccoli and couscous for serving

1. Season the lamb with salt and pepper. Heat the oil in a large pot. Add the lamb and cook over medium-high heat for 3 to 4 minutes until evenly browned, stirring often. Transfer lamb to a plate using a slotted spoon.

2. Stir the onion and garlic into the pot and cook 5 minutes until softened. Return the lamb to the pot. Add the stock, zest and juice, cinnamon and honey, and season with more salt and pepper. Bring to a boil, reduce the heat, cover and simmer gently for 1 hour.

3. Add the apricots and 2 tablespoons of the mint and cook for 30 minutes until the lamb is tender. Stir in the ground almonds or almond butter to thicken the sauce. Scatter the remaining 1 tablespoon mint and toasted sliced almonds over the top and serve with couscous and broccoli.

2 sweet potatoes, peeled and halved, and each half cut into quarters

2 to 3 turnips, peeled and cut into 2-inch pieces

1/2 of a small cabbage, cored and cut into bite-sized pieces

3/4 of an acorn squash or 3/4 pound of another squash, cut into bite-sized pieces

Note: Feel free to substitute vegetables such as potatoes, celery root, fava beans or any others of your choice.

1. Slice tomato in half and grate the pulpy flesh on the large holes of a grater; discard the skin. Set aside. Tie the parsley and cilantro together with kitchen twine.

2. Heat oil over medium-high heat in a large pot, and add the meat, turmeric, ginger, saffron, salt and pepper. Add the chopped onion, and mix. Brown the meat for a few minutes, stirring frequently.

3. Add the grated tomato and bundle of parsley and cilantro. Cover with water. Add the chickpeas. Cover the pot and simmer 30 minutes.

4. Add the carrots, sweet potatoes and turnips. Return to a simmer, cover and simmer 15 minutes.

6. Test the vegetables (you only need to test one of each type). If any are not thoroughly tender, remove the cooked vegetables to a bowl and leave the ones that need more time in the pot. Cover and simmer until the vegetables and meat are all done.

7. Make the couscous according to the package directions, using 1 cup of the broth in the pot along with water to make it.

8. Return the vegetables and meat to the pot to warm them and serve over the couscous, with the red pepper on top for a visual flourish.

2. Add tomato, celery leaves and cilantro and bring to a brisk simmer. Cook, stirring, about 5 minutes until mixture somewhat thickens, then add 1 teaspoon salt, the brown lentils, red lentils and chickpeas. Add 8 cups water. Bring to a boil, then reduce to a gentle simmer, covered with the lid ajar.

3. Let soup simmer for 30 minutes, then taste broth and adjust salt. Cook for 1 hour more at a gentle simmer, until the lentils are soft and creamy. It may be necessary to add more liquid from time to time to keep soup from being too porridge-like. It should be on the thick side, but with a pourable consistency. (With every addition of water, taste and adjust for salt).

4. Just before serving, add pasta and let cook for 2 to 3 minutes. Ladle soup into small bowls and pass lemon wedges for squeezing. This soup may be made in advance and refrigerated. If it thickens, thin with water or broth when reheating, and adjust the salt.

1. Lightly oil 2 baking sheets, or dust them with cornmeal or semolina, or line them with parchment paper.

2. Mix the flour, salt and sugar in a large bowl. Make a large well in the center of the flour mixture and add the yeast.

3. Add the oil and warm water to the well, stirring with your fingers to dissolve the yeast first, and then stirring the entire contents of the bowl to incorporate the water into the flour.

4. Turn the dough out onto a floured surface and begin kneading the dough, or use a stand mixer fitted with a dough hook. If necessary, add flour or water in very small amounts to make the dough soft and pliable but not sticky. Continue kneading for 10 minutes by hand (or 5 minutes by machine), until the dough is very smooth and elastic.

5. Divide the dough in half and shape each portion into a small circular mound. Place the dough onto the prepared pans, cover with a towel and allow it to rest for 10 to 15 minutes.

6. After the dough has rested, use the palm of your hand to flatten the dough into circles about 1/4-inch thick. Cover with a towel and let rise about 1 hour (longer in a cold room), or until the dough springs back when pressed lightly with a finger.

8. Create steam vents by scoring the top of the bread with a very sharp knife (it will work better if you first spray the blade with nonstick spray) or by poking the dough with a fork in several places. Bake for about 20 minutes, rotating the pans about halfway through, or until the loaves are nicely colored and sound hollow when tapped. Cool on a rack or a towel-lined basket. This bread is best frozen if not consumed the same day.

Recipe by Christine Benlafquih in thespruceeats.com

2 to 3 tablespoons orange blossom water, or zest from 1 orange

1. Slice off the very top and bottom of each orange, just enough to expose the flesh. Remove all of the peel and pith by strips, top to bottom, using the blade of your knife to cut away as little of the juicy flesh as possible. Trim any small bits of pith you missed, and pour the juices that collect on the cutting board into a small saucepan.

2. Cut the oranges horizontally to form thin slices, about 1/4-inch thick. Arrange in an overlapping pattern on a serving platter.

4. Stack the mint leaves together, roll tightly and thinly slice crosswise. Scatter the mint and pistachios over the oranges, and serve.

Recipe
Missing movie theater popcorn? Here's how to make it at home.
724 views