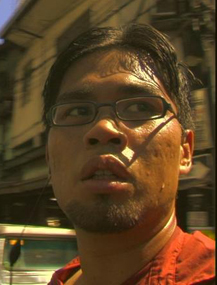 There is a little film making quite a splash at film festivals this year. It's called Cavite, a Truly Indie release from directors Ian Gamazon and Neill Dela Llana. The film tells the shocking tale of Adam, man who ˆ upon returning to the Philippines for his father‚s funeralˆ is blackmailed into terrorism in order to save the lives of his mother and sister. With some intense religious political subtext and a kitschy formal style, Adam‚s bad day becomes what Ian Gamazon calls, „a no-budget, one character political thriller.

The two high school best friends initially conceived Cavite after graduation. Gamazon formulated the basic plot line while Llana pulled from his experiences in the Philippines as well as his home videos of the country. After concocting a script and one rewrite, the pair took two weeks vacation and traveled to the Philippines with two cameras (one for emergencies) and no money.

Gamazon was talked into playing the lead as well as working the microphone while Llana stood-in as director and resident cinematographer. During postproduction, the duo edited on Llana‚s home computer.

Choosing Cavite as the main location for the film was both an issue of convenience and necessity. Llana has family in the city, which meant free room and board while filming. However, in a press release Gamazon explains that the city also served "our desire to showcase the Philippines in detailed travelogue framed through the traditional white-knuckle Hollywood thriller." In that respect, Cavite might be the first film of its kind to ever come out of the Philippines.

The thriller goes on to create a kind of cultural collage of the country, showing everything from cockfights to squatter camps to Jeepney rides. The small handheld camera made shooting much easier, allowing Llana and Gamazon to maneuver within tight spaces. It also enables the rough, jarring formal style to remain prevalent allowing the country and the city of Cavite to become a character all its own.

While the plot is a rough pastiche of postmodern garbage like Phone Booth and Die Hard with a Vengeance, the film carries some intense cultural undertones, namely the country‚s fight for independence.

The leads Adam and the Voice on the phone switch between Tagalog and English, which makes for an interesting device and does add refreshing depth to the film. However, it is a bit rough. Cavite is darkly lit and poorly exposed, with superfluous footage and, at times, shallow character development.

But, most of the film‚s shortcomings can be attributed to simple inexperience. Both Llana and Gamazon are amateur filmmakers who made a single-camera film with a total budget of $7000. In fact, once they were finished shooting, the directors sold the cameras on eBay so that they could afford to edit.

Given the constraints, the filmmakers look back and see Cavite as not only a filmmaker‚s journey but also a personal journey. "We became deeply affected by what we witnessed during production and we discovered things about ourselves and the world that would change the way we see it," says Gamazon.

Probably hailed as a testament to what Gamazon calls „guerilla filmmaking,‰ Cavite‚s international distributors are currently lobbying for this film to be submitted as the Philippines‚ foreign language film submission to the 79th Annual Academy Awards.

Cavite is currently in select theaters.
Article posted on 6/12/2006
This article has been viewed 2978 times.