‘GLOW’: The story behind the Weinstein-esque episode 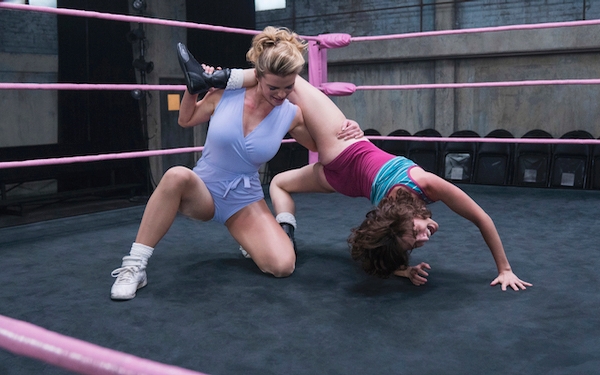 (Editor’s note: This article contains spoilers about the fifth episode in Season 2 of “GLOW.”)

Roughly around this time last year when “GLOW,” the buzzworthy series about a ragtag group of female wrestlers premiered on Netflix, the show’s writers and producers were already starting work on the sophomore season. The predominantly female team of scribes was determined to make the new story arc more grounded in the real world inhabited by the fictional characters.

The result is an episode that might feel ripped from today’s headlines.

The comedy, set in the 1980s and inspired by the real, low-budget TV series “Gorgeous Ladies of Wrestling,” has themes of sexism and misogyny baked into its premise. But this season, it more distinctly tackles one of the country’s current hot-button issues, sexual harassment.

In the fifth episode, “Perverts Are People, Too,” actress-wrestler Ruth Wilder (Alison Brie) attends a business meeting with a TV network chief, Tom Grant (Paul Fitzgerald), at a hotel restaurant in a bid to drum up more interest and support in the struggling wrestling show. Except, when she shows up, the host informs her that the meeting has been moved to Tom’s hotel room.

Whatever unease Ruth feels about the change in venue is alleviated when a familiar face, Glen Klitnick (Andrew Friedman), a TV executive she knows, opens the door. The business talk, however, soon disappears — as does Glen, who conveniently ventures out to bring back dinner menus — and it isn’t long before Tom is asking Ruth to put him in a headlock and, subsequently, begins rubbing his face into her chest. When Tom then heads into another room to get the spa tub flowing, Ruth makes her getaway.

“It’s always been in the DNA of the show that all these women are constantly being underestimated and objectified and reduced to the sum of their bodies,” said Rachel Shukert, who wrote the episode. “And Ruth is finally getting some success and recognition — she’s good at something and she’s starting to feel confident … which is why this felt like the right time to tell this story.”

Shukert added, “The tragedy of so many of the stories that have come out in recent months is that it always seems to happen just as you think you’re getting somewhere. It’s such a knock to the confidence to be, like, ‘Oh, he never liked my writing or my acting, he just wanted to sleep with me.’ It’s such a horrible feeling.”

The installment arrives as dust from the recent wave of sexual harassment and assault allegations still hangs over Hollywood and beyond. Some viewers might see parallels to the furor surrounding prolific movie producer Harvey Weinstein, who has been accused by more than 80 women of misconduct that includes sexual harassment and rape.

Weinstein has repeatedly denied engaging in nonconsensual sex. He pleaded not guilty earlier this month to charges stemming from a pair of alleged sexual assaults in New York City.

However, accounts of Weinstein’s alleged misdeeds came out months after the episode was written. “The Weinstein stuff came out just as we were in production,” Shukert said. “And we all just sort of looked at each other.”

“GLOW” also explores the aftermath of the encounter — how Ruth’s decision to leave affects the show, as well as the surprisingly discouraging reaction she receives from Debbie Eagan (Betty Gilpin), her onetime best friend and wrestling costar.

The Times sat down with “GLOW” creators Liz Flahive and Carly Mensch, along with stars Brie and Gilpin, to discuss the prescient episode.

Q: What was the genesis of this story line?

Mensch: We have a lot of female writers. And we talk about our times in the industry, and I think it was no surprise to anyone in the writers’ room — and in the female community in our industry — that these types of stories are out there. The stories that we were batting around the writers’ room, just of the women sitting around that table, were so much worse than what we put in the season. We chose for the season something that felt right for the story, right for Ruth’s story …

Flahive: And right for the time. We weren’t trying to do a ripped-from-the-headlines story, obviously. Our show is about a bunch of actresses for the first time being on television, in a network run by men, in a show directed and produced by men, so I feel like it was a very natural extension, in a lot of ways, just of the story that we were already telling.

Mensch: We started with Ruth. We started with where she was at in her career. In Season 1, we told her story in a bubble — where she lived in this community of women supporting her, and women helping forge her time at GLOW, and it felt important to shake her somehow, and help her confront some of the issues she would actually be facing.

Q: The perhaps more revealing moment about the encounters comes in the way Debbie reacts to it — she thinks Ruth should have played along for the sake of the show.

Mensch: Yes, the event is not as important to us as the conversation between the two women right there that felt like the actual meat of the story. How it affected Ruth, and then how it affected her friendship with Debbie.

Flahive: The conversation between Ruth and Debbie was something we felt we wanted to be very much a product of that time, but also a very complicated conversation.

Gilpin: When I first read it I was really, really sad, and felt upset, and protective of Debbie and protective of Ruth. It made me very sad for Debbie, that even in her journey in this season of empowering herself, there are still things in her brain that she still thinks are necessary sacrifices to becoming an empowered woman in this business.

Brie: What was so beautiful about the way Betty plays that scene, is that you do get the sense that Debbie has found herself in situations like this many times, and made a different decision, and feels ashamed of that decision. And that is such a big part of this story when we look at it today. The shame that women have been made to feel for so many years, and in this scene the instinct is to put the shame onto another person for making the opposite decision, in a very idealistic way. But I love that in a scene where what she’s saying is sort of outwardly villainous, you really still feel for her character. I think you feel for both of those women in that scene.

Q: Was there a version of the story where Ruth doesn’t leave?

Mensch: There was never a version.

Flahive: Because the story wasn’t what happened in that room, the story was the aftermath. And I feel like that was also the way to build it that was our show, because the show is about this fractured friendship between these two women, and that is the emotional sign …

Mensch: Which is why we stopped where we stopped. I just remember how hard it was to find a man who wanted to play that part. A lot of men didn’t want to play that. It was post-Weinstein, so it was so hard to cast.

Brie: And I remember shooting it. Paul Fitzgerald, the actor who played Tom Grant, was so spectacular. The contrast between how we shot it, and how respectful he was in terms of where he would put his hand. Claire Scanlostorin directed the episode. Claire and I, between every take, would be, like, “More! You can be sleazier. You can make me feel more uncomfortable.” He was so uncomfortable making me uncomfortable, and definitely my comfortability was the highest priority. It was almost comical, in a weird way, me being, like, “Really, you can touch my breasts.” I’m saying that aloud, and you have the permission.

Q: Were there changes made to the script at all as the news was coming in about Weinstein, et al.?

Mensch: I think the reason we went ahead with it was that the (Weinstein) news would come and go, but these stories are not going anywhere. I feel very proud that we stuck to it. The danger is that people would see it through a different lens. The only thing we cut was some of Ruth’s fully breaking down afterwards.

Gilpin: Ruth’s breakdown was with Debbie. And that’s where you can tell it’s 1985. I feel like a very, modern thing, sadly, is something I felt very strongly at the Women’s March was this feeling of women coming forward and saying, “I’ve been so lonely in my shame. This is something that I thought only I experienced, and only I felt.” The unity that can be found there, when people tell their stories and you can see that there are so many parallels, that it’s not just this one off instance that only happened to you. I think that it’s a very 1985 thing that both women feel that their only option is to suffer it alone.

Q: How much was there a discussion on what Tom Grant should look like?

Gilpin: We didn’t want him to be 65 and a troll. We were not interested in that.

Brie: I also think it’s a trickier conversation when the guy is not disgusting. It’s very easy for someone to be a villain when they look like Harvey Weinstein. Who, obviously, is a villain.

Q: Later in the season, Annabella Sciorra, who was one of the women who came forward about Weinstein, has an arc …

Mensch: First of all, I will just say I was naive and didn’t even realize she was involved in all of this stuff and was just so excited that we had this amazing actress.

Flahive: Who we had wanted for that part since Season 1.

Mensch: Then, it felt so gratifying to have these conversations with her. I remember, she’s just a badass. She is a smart lady. Who, I remember some of the most enlightening moments where I overheard her and Marc (Maron, who plays Sam) having conversations — very frank conversations over lunch. I was like this is so cool that this is happening to her show. I’m so happy that she’s bringing the full conversation back and giving us another perspective.

Gilpin: Our set can feel like an experimental future bio-dome of a feminist Montessori protective bubble. When “GLOW” wraps and I go back into the world outside of “GLOW,” professionally, I remember how much catching up the rest of the world has to do. I do try to bring the learned bravery from the “GLOW” set into my other jobs.