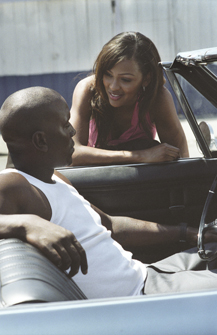 Running through the shady neighborhoods of Los Angeles is no strange feat to Tyrese Gibson, the star of Waist Deep , a modern Bonnie and Clyde-type film set in the ghetto.

Gibson, whose upbringing in Watts was able to help him bring some authenticity to his character, found himself shooting scenes in the neighborhood he actually grew up in.

Gibson plays O2, an ex-con who is trying to go straight for the sake of his young son, Junior. But when Junior gets kidnapped by a one-eyed thug named Meat (rapper the Game), O2 discovers he must come up with $100,000 to rescue him. Realizing that there is no legal way to accomplish this, he turns back to illicit games to get the dough. Being a loving and street-smart father, O2 will stop at nothing to save his son and put his family back together.

The only person he finds who is reluctantly willing to help him is the beautiful and street-savvy Coco (Meagan Good). Together they run through the streets of L.A. frantically trying anything to get the money together to rescue Junior, but time is running out fast along with their options.

“I don't think I'd be able to do most of these movies I'm doing if I weren't from Watts,” says Gibson. “There's a lot of value in what the streets teach you.”

Gibson was an obvious choice for the role of O2, with his rugged good looks and his street-smarts that clearly transfer to the screen. “Vondie Curtis (the director and co-writer) basically got a hold of me and said ‘You have to do this movie,'” says Gibson.

“I liked it and I was ready to go,” he explains. “As soon as he told me about it [I] met up with him about everything [and] it kind of all worked out, it was beautiful.”

The film is based on the unconditional love a father has for his child, which is one of the elements Gibson found most appealing.

“I was interested right away in the idea of a man's son being taken, and his doing whatever it takes to get his son back,” Gibson explains. “In this movie, audiences will see a ‘hood father, a good father who is not a deadbeat father.

“Family is really important to O2 because that's all he really has; when that bond is put in jeopardy, there's no length that he won't go to for his son.”

As Gibson's filmography grows with each passing year he feels lucky to be able to portray such a wide range of characters and shoot such different types of scenes. He loves them all so much, in fact, that he can't even pick a favorite.

“I like it all,” he laughs. “Not to generalize, but I like all the goodies – action/drama, any kind of friction and tension, I love it.”

The product of Waist Deep may be dark and intense, but Gibson assures that the feeling on set was far from serious. “We had a good time. Vondie never let me put anything funny on camera [but] I love being silly and having a good time,” he explains.

It certainly helped to be working so closely with seasoned actress Meagan Good, who was a friend of Gibson's prior to shooting Waist Deep .

“I [have known] Meagan for a few years now and to be able to work with her was kind of something we [saw] coming but we didn't know it would happen that fast,” he says.

Gibson can't say enough good things about Good and what a fine actress she is. But he does believe that, “This is her best movie. She's the new Halle Berry after this movie,” he gushes.

“Halle Berry's 40 now so there's got to be somebody black and sexy and young and spicy to take over. She's that one,” he says.

With a string of moderately successful films under her belt and the anticipated wide release of Waist Deep rapidly approaching, it may only be a matter of time before Good earns her household name status.

Although Gibson is excited about the opening of Waist Deep , he can't help but bubble up about his current projects. Currently filming a big-budget blockbuster and tying up loose ends with his new album have kept this triple-threat more than a little busy.

“I'm working on Transformers right now. That movie is so big it's crazy,” he laughs. With director Michael Bay at the helm and co-stars like John Voight, Josh Duhamel and John Turturro we have no doubt it will rock the box office.

But just ask Gibson what he is really excited about these days and he will undoubtedly tell you all about his upcoming album. This will be Gibson's fourth album and the biggest one yet.

“The thing that everybody's anticipating is this album,” he says. “I'm doing a double album called Alter Ego . One whole side [is] of me rhyming as ‘Black Ty,' my alter ego. The other side is R&B.”

For Gibson, it's the music that he is really into. “That's the world I come from,” he says. “Music is my passion. I love music – that's my first love. I do this acting thing on the side.”

In addition to busting out films on the side, Gibson is highly recognizable as a successful model as well. But the modeling is not what he is truly proud of.

Between modeling, acting and recording his new album, does this guy ever have time for a break?

“I'm known for staying up two [or] three days straight just working. I don't stop; I like to work. It's the only way to keep your focus,” he says.

“As soon as I finally get time I just go to sleep, that's all.”