‘The Awesome Adventures of Captain Spirit,’ the power of imagination 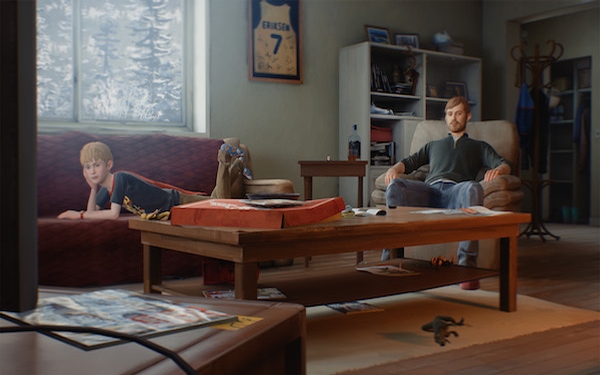 The Awesome Adventures of Captain Spirit takes the Life is Strange series from teenage angst to childlike imagination. (Courtesy Steam)

“The Awesome Adventures of Captain Spirit” takes the “Life is Strange” series from teenage angst to childlike imagination. How well does Dontnod Entertainment approach this transition? Our review.

The modern world is a soul-crushing place. It’s hard to cope with the sadness, cruelty, hatred, and overall negativity that fills it each and every day. For a child, there’s no shame in retreating into fantasy, where their imagination allows them to shape the world however they see fit. And that’s the larger, overall premise of “The Awesome Adventures of Captain Spirit.”

“Captain Spirit” is Dontnod Entertainment’s first entry in the “Life is Strange” franchise since they first left Arcadia Bay and it offers up a rather large window into where the sequel is headed. As a preview for the next game, it works effectively. As a standalone game, it’s a worthwhile use of a few hours, showing the potential of a grander story, while effectively working as a short story in itself.

THE POWER OF IMAGINATION

“Captain Spirit” centers around Chris, a young boy who has a full Saturday morning ahead of him. He has a full to-do list and players can opt to complete as few or as many of those tasks as they wish. The story unfolds in the same adventure game style as the previous “Life is Strange,” with the exception of a few upgrades.

Just as with “Life is Strange,” there’s a lot of real world drama in “Captain Spirit.” The subject matter can get a bit heavy. The story can be filled with angst. But while the first LiS was about teenagers coping with the world and facing it head-on, a child has the option to try and escape into fantasy.

That’s where “Captain Spirit” really sets itself apart from the first “Life is Strange.” While the entirety of the story takes place in Chris’ house and his yard, there are moments when players will be transported to entirely different worlds. It’s something that allows for Dontnod to be a little more playful with its storytelling and for a chance to mix up the environments, which is a welcome change for this series. The highlights of this game came whenever Captain Spirit retreated into imagination, whether it came in designing his costume or in a “transformation sequence” pulled straight out of an 80s cartoon or an anime.

There’s a greater sense of time passing by in “Captain Spirit” than in” Life is Strange.” Certain dialogue will change based on how long the player takes to act or respond to certain instances. For example, Chris is called down to breakfast at the start of the game, but if he takes too long to go to the kitchen, his father will get noticeably annoyed. Likewise, the phone will start to ring after a certain amount of time has passed and if Chris doesn’t answer, his father will again start to show some aggravation.

There’s some great potential shown with this mechanic, but the issue becomes that it eventually starts to work inconsistently. Knowing what would happen if too much time passed, I started approaching the items on Chris’ to-do list with a greater sense of urgency. However, I eventually started to realize that the game’s ending doesn’t kick into high gear until I trigger a certain event. So while there some instances where the passage of time matters, there are others where it doesn’t and it becomes difficult to distinguish between the two.

On the plus side, “Captain Spirit” is clearly not meant to be fully completed in a single sitting. Going back a second time to experience everything feels more fulfilling, especially given that there are several spots where (like in the first “Life is Strange” games) players can soak in the ambiance, as the acoustic soundtrack plays in the background.

In the spirit of the “Life is Strange” games, there are numerous dialogue branches between characters. However, this ties into the upgrades mentioned earlier. “Captain Spirit” can sometimes offer more than the standard four dialogue choices, with certain interactions featuring additional choices by toggling over with the D-Pad. However, in tying into Captain Spirit’s “powers,” players can open up entirely new choices by holding down the left trigger to transform certain selections.

Some of these choices are mundane, albeit cute, like Chris putting mac and cheese into the microwave and using his powers to ignite the lunchtime meal. He can throw a log into the fireplace and use his power to ignite the wood. However, there are other choices that tie into the idea of what it means to be a hero. There’s an overarching theme of vanquishing villainy, but also either opting to completely eradicate it or show mercy to show one’s enemies. Some of these choices are tied to either making a standard selection or going the other way by using Chris’ powers and it ties into a greater lesson about using great power responsibly. It’s a theme that feels underexplored in “Captain Spirit,” but one that sets the table nicely for future stories.

“Captain Spirit” does well balancing itself as a clear setup for “Life is Strange 2,” while also functioning well as a standalone tale. Fans of the series will love how the storytelling mechanics have evolved from the first game, while general adventure game fans should enjoy the multiple dialogue choices, the greater emphasis on inventory, and the numerous puzzles scattered throughout the house.

I walked away from “Captain Spirit” wanting to know more about where the story is headed, but even without the game’s overt hints pointing to the eventual “Life is Strange” sequel, I enjoyed Chris’ story for what it was. And given the current state of the world, it’s nice to experience a story from the eyes of an innocent child. “Captain Spirit” challenges players to approach it with a different perspective and that challenge is one everyone should welcome.

This review is based on an Xbox One digital code provided by the publisher. “The Awesome Adventures of Captain Spirit,” available Tuesday, June 26 on Steam, the PlayStation Store, and Xbox Live Marketplace for free. The game is rated M.