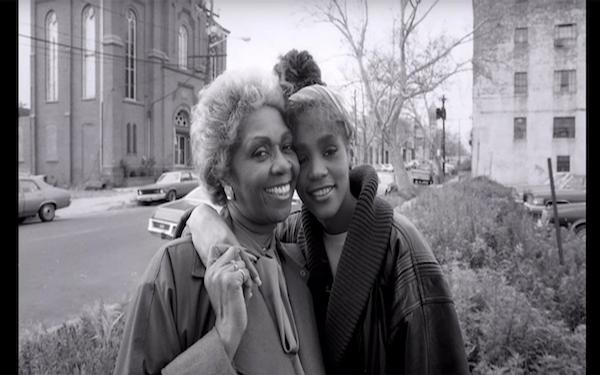 In 1999, Whitney Houston was at the peak of her fame post-“The Bodyguard.”

Her first album in eight years, “My Love Is Your Love,” was hot on the charts, and she was prepping a tour that would take her across Europe and North America.

Wanting to tell her story at a time when speculation about her life behind the scenes was intensifying, the pop superstar gave Austrian director Rudi Dolezal full access to trail her on tour.

Onstage performances, candid backstage moments with family and revealing interviews were all captured for what was a planned documentary titled “Whitney Close Up.”

However, the project went unfinished, stalling under the singer’s refusal to address the substance abuse problem she was battling that ultimately led to her death at 48 in 2012.

One-hundred-plus hours of footage remained unseen for nearly two decades until last year, when Dolezal was approached to co-direct “Whitney: Can I Be Me,” an intimate portrait examining how race, sexuality, addiction, identity and fame affected the singer.

Much like Houston’s life, “Can I Be Me” was marred by controversy.

It was denounced by the late singer’s estate, which revealed it had commissioned an official retrospective of the performer, titled “Whitney,” which premiered at the Cannes Film Festival in May and arrives to theaters on Friday. (Meanwhile, “Can I Be Me” premiered at the 2017 Tribeca Film Festival before quietly bowing on Showtime in August of last year.)

“[The filmmakers] really didn’t want to follow the proper protocol when it came to working with the estate,” said Pat Houston, who managed her sister-in-law’s career and now serves as executor of her estate, of last year’s documentary.

“Whitney always wanted to do a film about her life,” Pat said. “But it should be handled by the people who knew her best.”

The arrival of two documentaries within a year of each other speaks to the intrigue and mystery that surround a singer whose meteoric rise in pop music and Hollywood was eclipsed by sordid tabloid tales of drug use and a volatile marriage, and those around her who want to change the narrative and salvage the reputation Houston tarnished while she was alive.

“We all forget she was human,” Pat said. “Whitney was everyone’s girl … but she had the same issues and problems like we all do. We hope [fans] get answers that they need with this.”

Directed by Oscar-winning filmmaker Kevin Macdonald with the full cooperation of the Houston family and access to the late singer’s archives, “Whitney” is an unflinching look at the superstar — and nothing was off-limits.

The film addresses Houston’s insecurities with her blackness and sexuality; family dysfunction; that tumultuous relationship with Bobby Brown; and the addiction that crippled a woman who was desperate to correct course for herself and her daughter, Bobbi Kristina Brown, who tragically died in similar circumstances three years after Houston.

“It proved to be one of the hardest films to tackle,” Macdonald said. “There was so much secrecy and, sort of, this reluctance to talk about her — even from the family, who wanted the film to be made. It took a long time to get their trust and for them to open up as they’re still living with the impact of Whitney’s death.”

Macdonald didn’t set out to work on a documentary about the singer, and he actually needed to be persuaded.

“I wasn’t interested,” he said. “Here was someone we all have this opinion about; it wasn’t until I learned how misunderstood she was, in certain ways, that I was interested.”

The idea for the documentary began with Lisa Erspamer, who grew close to Houston and her family while producing the singer’s tell-all interview on “The Oprah Winfrey Show” nearly a decade ago.

In 2015, Erspamer pitched Pat and Houston’s film agent, Nicole David, who represented the singer from 1986 until she died. David suggested they bring on producers Jonathan Chinn and Simon Chinn — who agreed on the condition that the filmmakers retained full creative control — and she convinced Macdonald to helm the film.

Houston’s story had been well documented: her youth in Newark, N.J.; being groomed by her taskmaster mother and formidable gospel singer Cissy Houston; her days modeling, signing with Clive Davis; and setting the gold standard for pop in the late ’80s with a record-breaking career that crossed over to film.

We all read the headlines of “diva-like” behavior, heard the rumors about rampant cocaine use and chuckled when her name became far more synonymous with punchlines than her once-pristine career.

Macdonald doesn’t turn away from any of that — one gripping sequence cuts through an uncomfortable onslaught of one-liners and harsh jokes directed toward the singer — in his mission to bring some clarity to Houston’s public demise.

He cast a wide net for his investigation, filming interviews with more than 70 people connected to Houston, and constantly had to “crosscheck” his interviews as he discovered how economical his subjects were with the truth.

It was that slow reluctance from Houston’s family to be forthright that pushed Macdonald to dig deeper into her story.

Houston’s sexuality (described as “fluid” by her closest friends and colleagues) and her long-speculated romance with Robyn Crawford, her oldest friend and former creative director, has long been a subject of intrigue. Macdonald provides glimpses of the tenderness between the women while also showing the vitriol their relationship was met with by the singer’s family.

“Robyn was a nobody. She was an opportunist, a wannabe,” Houston’s older brother, Gary Houston, says in the film. “She happened to involve herself with [Whitney] for whatever reasons. … She was something that I didn’t want my sister involved with. It was evil, it was wicked.

“I knew what she was, and I tried to tell my sister to leave her alone.”

Pat, who began managing Houston in 2001, rejects accusations that Houston’ s family is homophobic. (Cissy made headlines when she told Winfrey it would have “absolutely” bothered her if Houston was gay and she wouldn’t have condoned it.)

“It had nothing to do with her being gay and everything to do with control,” Pat said of the family’s distaste for Crawford, whose exit from Houston’s inner circle is shown in “Can I Be Me.” “Whitney was the only girl, and the baby, and you’re looking at a family that is extremely protective. It wouldn’t have mattered who it was. It was about her not being around them.”

When asked about the statements he made about Crawford (who ultimately declined to participate in the film), Gary said he now regrets his words: “There were a lot of opportunists around us and people who wanted to gain something from our family. People wanted to deceive you and take advantage,” he explained. “There were a lot of hurt feelings going on at that time, and some of that was directed toward Robyn. We had our differences, but that’s all. I said things about Robyn that wasn’t right.”

Gary and Whitney’s other brother, Michael, proved essential to Macdonald. Both toured with their sister — the singer employed virtually her entire family, to great detriment — and indulged in drugs with her with reckless abandon.

But it was Gary’s bombshell allegation that he was molested by cousin Dee Dee Warwick, Cissy’s niece and the younger sister of soul singer Dionne Warwick, that changed the course of the film.

“It was very difficult to talk about,” Gary said. “But truth is won when you have the courage to accept the pain of knowing it about yourself. Hopefully, this will open up [people’s] eyes.”

Macdonald suspected Houston experienced childhood sexual abuse from watching archived interviews and noticing a lack of comfort in her physicality that was reminiscent of past subjects he’d interviewed who had been abused.

After a year of work on the doc, Macdonald’s suspicions were confirmed during the last weeks of filming when he was told off the record about Houston’s alleged abuse and how it might have played into her discomfort with her sexuality and fueled her self-torture.

“It made everything click in place in a certain way,” Macdonald said. “It made what was already a complicated film even more complex. This is really a film about a family coming to terms with their own issues. It was therapy for them. They needed this.”

“Whitney” is the centerpiece of a number of projects the estate is currently overseeing.

A rarities album is expected to arrive this fall, and there are plans for a traveling exhibit, a potential hologram tour, and eventually a biopic. Because the singer didn’t record a lot of music in her lifetime, the estate is limited when it comes to packaging posthumous albums.

“Her legacy is music,” Pat said. “And it’s about preserving her legacy. We want to give the fans what they want and not just come up with anything. We’re only going to do projects that make her shine, and she would have wanted this.”