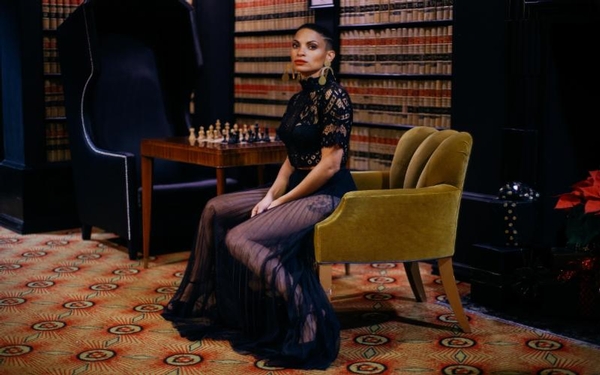 Lauded singer-songwriter Goapele kicks off the twenty-second season of the Skirball Cultural Center’s Sunset Concerts on Thursday, July 26, at 8:00 p.m, with her deeply personal take on R&B, soul, funk, and hip-hop. The evening begins with DJ Mamabear of dublab, who will spin a set at 6:30 p.m.

Goapele—whose name means “to move forward” in the African language Setswana—debuted her first single, “Closer,” in 2001, which has racked up more than nine million Spotify streams and been sampled by accomplished rappers Drake and YG. Since her explosive debut, the Oakland-born and now LA-based artist and activist has released four full-length albums, landed high-profile syncs in Sparkle,  Honey, and  90210, and collaborated with famed artists Snoop Dogg, E-40, Eric Bené t, and Soulive. Goapele released her most recent EP, Dreamseeker, in 2017, which “soulfully and thoughtfully relay the singer/songwriter’s perspectives on motherhood, sensuality, social consciousness and self-love” (Billboard).

The daughter of a South African activist father and a New York–born Israeli Jewish mother, Goapele asserts, “I’m a woman, but I’m also a whole person who won’t be confined to any one box…. Nobody is just one thing. Within any race, within any genre, and within any neighborhood, there’s so much diversity. As artists and especially as women of color, we have to be proud of that. I’m coming from an honest place and expressing the different parts of myself that make me whole.”

As she evolves as an artist, Goapele also devotes herself to activism, acting, and fashion. In 2006, she received the first-ever Human Rights Cultural Hero Award, from the Ella Baker Center for Human Rights, for her inspiring performances at political rallies and events in the US and abroad. She recently partnered with the AIDS Healthcare Foundation as an official ambassador. In the midst of all her projects, Goapele is currently recording a new album, expected for release later this year.

All concerts begin at 8:00 p.m. Check-in and FREE admission to the Museum and Skirball campus open at 5:30 p.m. Doors to the concert venue open at 6:30 p.m. Parking: $10 per car (cash only) Carpooling and ridesharing are encouraged. Street parking is strictly prohibited. Or take Metro Rapid 734/234

All Skirball exhibitions (except Noah’s Ark) are free and open until 10:00 p.m. during Sunset Concerts, including Leonard Bernstein at 100, The Jim Henson Exhibition: Imagination Unlimited, and Spotlight: Selections from Kehinde Wiley’s The World Stage: Israel. Audrey’s Museum Store is open until 8:00 p.m.

Grab-and-go light fare, full bar service, and specialty food items will be available for happy hour and throughout the show. Guests may bring their own food. Note: No outside alcoholic beverages or chairs are permitted.