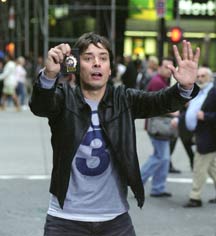 Brooklyn-born Jimmy Fallon is a bad driver who hates surprise birthday parties. Despite his flaws and pet peeves, though, the 30-year-old actor/comedian, who is most widely known for fine-tuning his comic chops on "Saturday Night Live" for the last six years, is finally entering the world of leading man status.

The project? A re-imagining of the 1998 French film Taxi, directed by Tim Story (Barbershop) and co-starring Queen Latifah. The part? Overeager, undercover New York City cop Washburn, who is out to solve a string of bank robberies with the help of cabbie Latifah and her powered-up taxi. The biggest upside? Working with Latifah and Story — oh, and a frisking scene which, according to Fallon, left half of New York City speechless.

"I think New York was very thankful for that scene," Fallon says of a part of the film in which his supermodel co-star, Gisele Bundchen, is openly searched on the city’s streets. "There were people on the street just watching and then, all of a sudden, there was a moment of silence. Even birds were like, ‘I’m not even chirping, ’cause this is [too hot]. We just saw some madness right now.’

"It wasn’t even that hot, but everyone was sweating," Fallon adds, grinning.

The actor, who deadpans at random and imitates both a drunken fool and a foreign cab driver at various points during the interview, is one of the most talented comics working today. He perfected his bit as co-host of "SNL’s" ultra-popular "Weekend Update" segment over the last half-decade and now, after small parts in films like Woody Allen’s Anything Else, Cameron Crowe’s Almost Famous and the HBO miniseries "Band of Brothers," Fallon is branching out into mainstream comedic films. With his connections to "Weekend Update" co-host Tina Fey, though, it’s too bad that Fallon couldn’t get himself a role in the well-received, biting teen comedy Mean Girls, which was written by — and featured — Fey herself.

"I did [read for it] but they cut me out. Just kidding," says Fallon, who now breaks into deadpan mode. "I read the script and there wasn’t really a role for me. But I do usually read for 15- or 16-year-old girl [roles]. I never get the parts, but I should have [read for this one]."

Joking aside, though, Fallon — who is currently filming the comedy Fever Pitch for the Farrelly Brothers — says he’s thrilled to be a part of Taxi. Even though he’s never seen the original 1998 French version, Fallon says that the main selling point for him was the fact that Latifah was attached to the project.

"I got it, read it and was like, ‘It’s all right.’ It’s one of those action buddy things. They wanted me to be the cab driver at one point," says Fallon of the script before the Latifah addition. "She hosted ["Saturday Night Live"] once, and she was great.

"And they said Tim Story was going to direct it. I laughed at Barbershop and thought that was really funny. So I was like, ‘I think this is a puzzle I want to be a piece in.’ It seemed like something that would be good."

Another aspect Fallon thought was "good" about the new version of Taxi was that Story decided to use an ultra-sexy group of beautiful, leggy Brazilian supermodels as bank robbers. According to Fallon, it’s just one of the positive liberties that was taken on the film.

"I don’t even know what [the original] was about, but I know we changed things," says Fallon, talking about the new Taxi. He deadpans again. "I think our bank robbers are Brazilian supermodels, so subtle changes like that [were made]. I think the one thing a lot of people don’t understand, that the media tries to keep out of the news, is that 75 to 80 percent of all bank robbers are Brazilian supermodels. It’s a huge problem in America," he says.

Still straight-faced, without even the least bit of fibbing in his voice, Fallon continues. "I tried to get Michael Moore to do a documentary about it. He hasn’t called me back, but I left him about 25 messages yesterday. We’ll see what he thinks." Fallon says pensively, "One of them, I think, was just singing. I was drunk and called him — drunk dialing."

Taxi is currently in theaters.