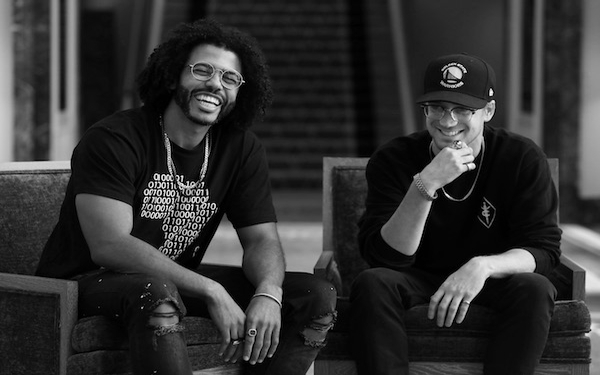 Daveed Diggs, left, and and Rafael Casal co-star in the new movie "Blindspotting."

“Blindspotting” is both a cathartic battle cry against police brutality and gentrification, and a sensitive, nuanced unpacking of race and identity from co-writers and co-stars Daveed Diggs and Rafael Casal. Bay Area natives and high school pals, Diggs and Casal started writing the film back in 2009 as a way to talk about their hometown of Oakland, Calif., and the way it was changing in the wake of the tech boom. It’s an emotional, funny and harrowing depiction of Oakland in a particular time and place, illuminating just what our society values and what it demonizes.

Director Carlos López Estrada brings a buoyant vibrancy, as well as a strong sense of experiential subjectivity to the film. The audience inhabits the life of Collin (Diggs), a young black man, a convicted felon riding out the last three days of his probation at a halfway house.

These final days are complicated by his childhood best friend and co-worker at a moving company, Miles (Casal), a white guy from Oakland, who outwardly expresses his ‘hood bonafides in the face of rapid gentrification, lest he be mistaken for another basic hipster. The demonstrations of his local roots, from his tattoos, to the grill he wears, to buying a gun, have repercussions down the line. But the question “Blindspotting” asks is: Who will suffer those repercussions? Miles or Collin? And why?

The film so deftly illustrates the reality of white privilege you don’t even realize you’re getting the lesson until you’re already in it. When Miles honks at an annoying pedestrian, “the black guy with dreads” is blamed, and that’s the minor stuff. What happens if Miles picks a fight? If the cops show up, who will their guns be trained on? Who will go to jail?

The palpable terror of police brutality is what motivates Collin throughout. Not just from individual cops, their cruisers lurking like sharks, but the violence of the system. He’s terrified to break curfew or leave county lines. His halfway house supervisor urges him that because he’s a convicted felon, it’s on Collin to “prove otherwise at all times.”

The burden is made real when Collin witnesses a police shooting. Collin won’t even report it for fear of the consequences, but the trauma follows him everywhere, echoing all over him whenever he comes face to face with a cop. The film renders not only the physical but emotional violence of police brutality, and Diggs expresses that beautifully in his performance.

“Blindspotting” tackles another, more insidious kind of cultural, race-based violence too — gentrification. The displacement of generations from their homes, their place, their identity, the loss of cultural markers and rituals — it’s all violence, and it’s the violence Miles suffers the most. It’s the unlawful seizure of his hometown, his identity, by interlopers and posers. Most people look at him and see a gentrifier, while those same people look at Collin and see a thug. That misidentification, that willful blind spot, is what makes both men lash out.

The dialogue has a lyrical flow and bounce, the buddies constantly freestyling (Casal is a champion slam poet and Def Poetry performer, while Diggs demonstrated his skills in a little show called “Hamilton”). “Make it pretty so they like to listen,” Miles tells Collin, and “Blindspotting” follows suit, drawing us in with comedic beats and warm chemistry before laying down harsh truths. The climax tends toward the melodramatic, almost fantastical, and while it’s overwrought, the words spoken are powerful. We’ve all got blind spots — culturally, racially, socially — and “Blindspotting” invites us all to take a long hard look at them.

Rated R for language throughout, some brutal violence, sexual references and drug use.