With no ‘Game of Thrones’ or ‘Avengers,’ Comic-Con rolls on as studios race to fill the gap 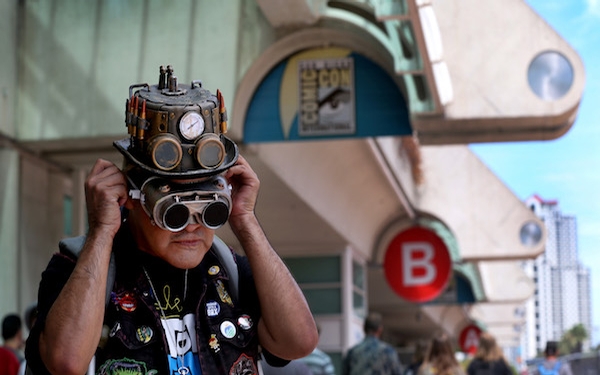 “Game of Thrones” is MIA. A new “Star Wars” will not be blasting off. The superheroes of the Marvel Cinematic Universe are taking a timeout.

This year’s edition of Comic-Con, the annual gathering for thousands for comic book and pop culture fans eager to be the first to see what’s on the horizon of the heroic, fantastic and spectacular, is being preceded by the question, “Guess who’s not coming to San Diego?”

A four-day feast of panels, autograph sessions, parties and screenings, the 49-year-old Comic-Con has evolved from a gathering spot for mostly costumed fans of comic books and video games to celebrate their geekiness to a key promotional stamping ground for Hollywood studios and top stars to provide enticing, teasing glimpses of upcoming projects to audiences beyond the core comic book constituency.

But this year’s event may be more notable for the no-shows.

Citing production demands, HBO announced last month that it was pulling out of this year’s Comic-Con. That’s bad news for devotees of “Game of Thrones,” which is still shooting its final season, scheduled to air in 2019, and “Westworld,” about an amusement park filled with robot “hosts,” which racked up several Emmy nominations last week.

As for explaining the absence of “Star Wars” and Marvel’s many-pronged “Avengers” franchise, Comic-Con’s strength as a platform has, to an extent, led companies that own the properties to focus on events over which they have more control. Both properties are owned by Disney, which pulled them out of Comic-Con in favor of D23 Expo, a biennial, fan-centric gathering the company has utilized in the past to, among other things, announce plans for “Star Wars” attractions at its theme parks.

Marvel skipped Comic-Con 2015 as well, and in August 2019, fans of all the titles under Disney’s corporate umbrella will visit the Anaheim Convention Center for D23 panels similar to ones they may have once attended some 100 miles to the south.

In past years, major studios at Comic-Con have hyped their upcoming movies and shows with star-studded panels, exclusive footage and other surprises to boisterous crowds packed inside the San Diego Convention Center’s 65,000-square-foot Hall H.

Naturally, studios aim to generate positive buzz about upcoming movies and shows, but they also recognize the presentations as an acknowledgement of the importance of devoted fans who wait in line for hours for the chance to make it into the room. A strong presentation in part helps let fans know their devotion is appreciated.

That said, the high expectations of Hall H have set a standard that studios don’t take lightly. Whatever buzz Guy Ritchie’s 2017 epic “King Arthur” may have generated in Hall H did not boost its poor showing at the box office. When Marvel revealed its plans to forgo the trip to San Diego in 2015, studio President Kevin Feig told the Hollywood Reporter, “If you can’t go to Comic-Con and over-deliver, then don’t go.”

Concerns over the health of Comic-Con have long circulated in the fan community. The proliferation of other conventions in New York and Los Angeles along with Comic-Con’s sibling event WonderCon have led some insiders to question the value of Comic-Con. Plus, studios wary of footage leaking from Comic-Con onto the internet (as has happened with anticipated films like “Suicide Squad” and “Deadpool”) could be leery of how much they want to reveal.

But with Comic-Con committed to San Diego through 2021, the event’s viability at least in the near future seems secure.

Some 135,000 passes again sold out quickly when they were released in January, and another 200,000 fans are again expected to crowd the area around the San Diego Convention Center, where interactive exhibitions tied to upcoming and current shows will fill the streets.

“It’s all about the event, not about any one person,” comic- and TV-writer Mark Evanier told the San Diego Union-Tribune in advance of the convention, which he has attended every year since its 1970 debut. “They have no problem packing the room.”

However, not having Jon Snow or Iron Man in the Comic-Con mix presents an opportunity for movies and shows with smaller footprints that might have been previously regulated to smaller rooms, a reality that hasn’t escaped the notice of major studios.

Warner Bros. has booked Hall H to spotlight the CW’s teen favorite “Riverdale,” and projects from its DC Films stable including “Aquaman,” the Zachary Levi-led “Shazam!” and a glimpse of the next Wonder Woman film, “Wonder Woman 1984.” The studio’s arsenal also includes Wizarding World’s next installment, “Fantastic Beasts: The Crimes of Grindelwald,” the kaiju film “Godzilla: King of the Monsters,” and “The Lego Movie 2: The Second Part.”

Universal will host panels on M. Night Shyamalan’s “Unbreakable” sequel, “Glass,” along with the latest installment of the horror warhorse “Halloween.”

Sidestepping Disney’s control over much of the Marvel Universe, Sony Pictures will present a Hall H panel on “Venom,” a Spider-Man spinoff that features Tom Hardy. 20th Century Fox will preview “The Predator,” an extension of the 1987 action franchise, and offer up a victory lap for its Marvel hit “Deadpool 2.”

Paramount has booked the massive room to introduce “Bumblebee,” a spinoff to the “Transformers” franchise. An avowed comic fan, the Wu-Tang Clan’s RZA will unveil “Cut Throat City,” a heist movie he directed.

“You’re either rallying your base to have more of a connection with you and then go out and spread the gospel, or you’re introducing your property to new fans,” Rachel Walker said in an interview with The Times last year. She has worked in marketing independent films and genre at multiple installments of Comic-Con.

As in previous years, television also puts a major footprint on Comic-Con. Major Hall H presentations include a session for “Star Trek: Discovery” and salutes to the 10th anniversaries of AMC’s “Breaking Bad” (tied to the screening for the season premiere of prequel “Better Call Saul”) and Joss Whedon’s cult favorite, “Dr. Horrible’s Sing-Along Blog.”

Genre fixtures like “Doctor Who” (and its first female doctor, Jodie Whittaker) and “The Walking Dead” occupy Hall H alongside its spinoff “Fear the Walking Dead.”

Comic-Con also continues to provide a promotional lift for shows well beyond the zombie or superhero realms. NBC will present panels for comedies “The Good Place” and “Brooklyn Nine-Nine,” the latter of which was recently picked up by the network after it was dropped by Fox.

That said, for all of Comic-Con’s continued size and importance from a marketing perspective, its broader reach has also spelled an end of the road for some longtime fixtures. Denver’s Mile High Comics, which had maintained a presence in the convention’s main hall for 44 years, departed last year as founder Chuck Rozanski cited one property in particular when describing the decision to The Times.

“When you have HBO putting their ‘Game of Thrones’ experience across from the convention center, that acts as a real magnet … you don’t want to see your customers leave for across the street,” he said.

This year will mark the exit of Bud Plant, a comics distributor who has exhibited at every Comic-Con since its inception.

“After 48 consecutive years of exhibiting at Comic-Con, I am not going to set up this year,” Plant said in a Facebook post about the decision. “It’s nothing against the show itself. The attendees these days are, in general, not our customers or they are not looking for books.”

Although HBO, Marvel and others are unlikely to stay away long, the decision for these exhibitors is more final as a Comic-Con that is focused on its namesake is unlikely to return.

“San Diego Comic-Con is magic,” Rozanski added. “But it moved on, and it’s not my world anymore.”