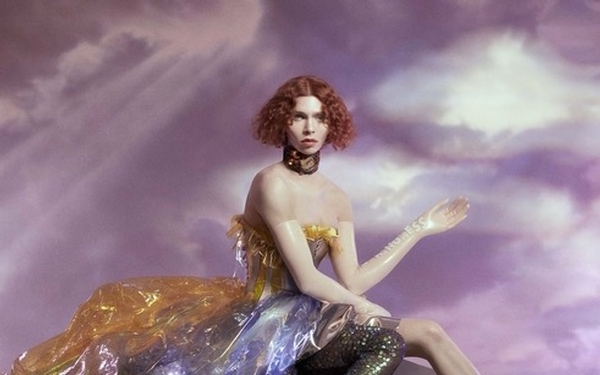 “OIL OF EVERY PEARL’S UN-INSIDES”

In 2015, mysterious producer-trickster Sophie released “Product,” 25 nearly perfect minutes of uncanny-valley pop tunes grounded by bubble wrap and metallic clanks rather than kicks and snares. But her proper debut album is as imperfect and messy as its title, beginning with an unabashed power ballad that debuts her own vocals (“It’s Okay to Cry”) and a BDSM-themed version of Stomp (“Ponyboy”) before the beatless and breathtaking “Is It Cold in the Water?” acts as a rabbit hole to avant garde madness for the next half-hour. “Pretending” could have been an ambient set piece on the Knife’s final album. “Infatuation” features a guitar solo digitized to sound like AOL dialing up, but the nine-minute Aphex Twin exorcism “Whole New World/Perfect World” never takes off. And the lone return to danceable pop reminds us what she’s capable of. — Dan Weiss

On the final song on “The Mountain,” “How I’m Going Out,” Dierks Bentley acknowledges that he’ll eventually end up as “another ghost on Music Row.” But he asserts that he’ll know “when it’s my turn to jump off this carousel,” avoiding the mistakes of “the ones who left too soon and the ones who didn’t know when to leave.”

Based on his work here, Bentley has not overstayed his welcome yet. The country star can be as commercial as anybody, but at his best he can also dig behind the crowd-pleasing conventions and unearth some real substance. For this project, he left Nashville to record in Telluride in Colorado — hence the album title — and the move seems to have resharpened his muse.

There’s no “Drunk on a Plane” here, but on numbers such as “Burning Man,” featuring the Brothers Osborne, and the title song, the big, rock-edged sound jars with the often searching and sober nature of the lyrics. Mostly, though, Bentley settles into a nice balance of the radio-ready and the rustic that suits such selections as “Woman, Amen” and “You Can’t Bring Me Down.” To borrow from his duet with Brandi Carlile, on these numbers he is “Travelin’ Light,” and musically that style suits him best here. — Nick Cristiano

Though started by nu-jazz keyboardist, composer and experimentalist Robert Glasper to embody the duty of an artist (“reflect” and “respond,” according to Nina Simone), there is no single star within the R+R=NOW universe. Terrace Martin (synth, vocoder), Christian Scott aTunde Adjuah (trumpet) and Justin Tyson (drums) act in egalitarian, funky fashion with Glasper. For Philly’s sake, however, two R+R names stand out: Local bassist Derrick Hodge is famous for diverse gigs with the Blue Note All-Stars, Talib Kweli and Robert Randolph. Then there’s Taylor McFerrin, the elusive, elastic vocalist, beat boxer and synth player (oh, and Bobby McFerrin’s son) who has existed under the radar since his 2014 solo LP, Early Riser.

As one, R+R=NOW makes improvisational prog-rocky, but predominantly ambient soundscapes, that contain all of their genre-jumping talents – and deeply haunting melodies in the case of the piano-heavy “Colors in the Dark” and the modal jazzy “Resting Warrior” – without sounding messy. (That’s a good thing.) With so many styles and guests (e.g. rapper Yasiin Bey, actor Terry Crews, comic Amanda Seales) within R+R’s mix, the power of dynamic, vividly imagined musicianship and diamond-cutting precision is needed for subtle, nuanced numbers such as the acidic “The Night in Question” and the new age-y “Been on My Mind” to stand their ground.

Here’s hoping this superstar session’s debut yields additional fruit. R+R = NOW should be R+R = TOMORROW, and the next day too. — A.D. Amorosi