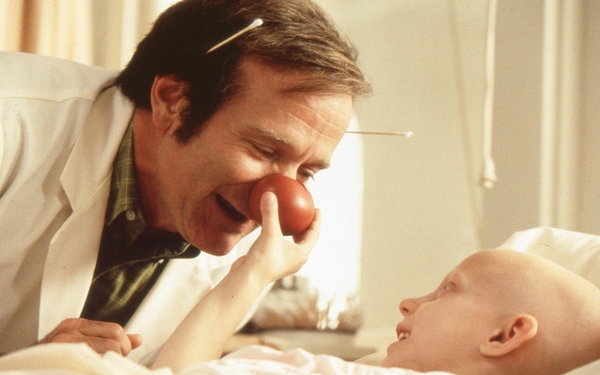 Robin Williams is the subject of a new documentary being presented by HBO called "Robin Williams: Come Inside My Mind." Here he stars in "Patch Adams." (Handout/TNS)

For nearly 40 years he kept us in stitches, but how Robin Williams created those deft sutures has remained a mystery. HBO hopes to shine some light on that puzzle with the documentary “Robin Williams: Come Inside My Mind.”

Produced by Alex Gibney and Shirel Kozak, the show features the luminaries who knew and worked with him, including Billy Crystal, Steve Martin, Whoopi Goldberg, Eric Idle and Pam Dawber, who co-starred with him on “Mork & Mindy.”

Interviewing Williams was like presiding over the United Nations Security Council. He would rush through a dozen dialects, skipping from character to character, complete with sound effects and non-sequitur asides.

But he could be serious, too, and displayed his deeper side in films like “Awakenings,” “Dead Poets Society” and “Night Listener.”

The last time we talked he forgot the zany antics and grew pensive. “There’s a part of myself … that is very terminally shy that I use comedy to overcome,” he confessed. “There is that to tap into, that desperate fear of people. That includes doing interviews with people. How is it comfortable to talk about yourself? Now, thanks to being with a wonderful woman, therapy, and different things, you can deal with people, and come and play,” he said.

“You can know when you’re playing and when you’re not, and render unto Caesar that which is Caesar’s, you can sometimes say, ‘This is what I feel,’ and not have to hide behind some strange voice.”

Still, the strange voice and antic meanderings were good for more than a giggle, he said. “With comedy you realize how many great comedians there are and how many people are affected by them. Comedy is a great art, yeah, when it works,” he said.

“I’ve never seen anything funnier than Eddie Murphy in ‘The Nutty Professor.’ That scene around the dinner table. That alone would get an award if you want to go for sheer funny. But they’re talking about, ‘Well, is it meaningful?’ I think so if you had a great laugh and you come out of there going, ‘Man, I’m a human being. I laugh, I fart, I grab, I do things. I’m awkward. I don’t know what I’m doing most of the time. I fall down. And … I’m laughing at him.’ That’s all part of it.”

Williams, who studied at Juilliard, began performing standup comedy in small comedy clubs in the ’70s.

“I realized it was working pretty well when I was in my 20s,” he recalled. “All of a sudden I was starting to find a unique voice versus kind of a combination of other things. It was kind of interesting. There was a big benefit one night in San Francisco, and I really started to have a good time and realize, ‘Hey this is ME! It’s not Jonathan Winters or anything.’

“Everyone starts off being kind of someone else,” he said. “I realized that’s how I’m wired. That’s what I do. I think I have a different perspective, but hope to be finding things that other people can relate to — not be so out-there that it’s lost on other people.”(

It wasn’t lost on other people, and Williams remained popular until the day he died four years ago.

In spite of his success in film and television, he continued to practice his standup in small venues. “I don’t prepare,” he explained. “It’s fun, I like the interplay. I like improvising at a small theater on Franklin Avenue and have been having a good time doing that. I don’t want to cocoon myself. I think the idea is to keep yourself in the game, still hitting the ball, being out among people. Recently I felt like, ‘Where have I been?’ I found out about MySpace. And my son looked at me like, ‘You poor troubled man.’ You find out all different things from all different sources, and that expands you.”

Williams said he found standup comedy therapeutic. “It’s hard, but when you do get a great audience and do get the laughter, it’s a great drug. You’re flying. And to die on stage is one of the worst feelings. It’s like being circumcised in Yankee Stadium. Why do they do it? Sometimes they want to express something, sometimes they just want to do it for laughs, sometimes they have this demand, like Lenny Bruce said, ‘Love me!’ It is an affirmation.”

You don’t usually think of the little lady in the minivan as a heinous felon, but CBS is devoting a new series to just that when it premieres “Pink Collar Crimes” July 28. Soccer moms, PTA members and the women pushing the shopping cart may be embezzling money or robbing banks in their spare time. The show will feature prosecutor Marcia Clark offering her sage analysis about these wayward wenches.

DATABASE IS DEVOTED TO HORROR MOVIES

Horror movie fans can celebrate the new database in town that will tell you everything you ever wanted to know about horror movies. More than 7,000 horror films from a little-bit scary to truly frightening are part of the website — all categorized — at allhorror.com. The site also lists upcoming scary movies streaming on Shudder, Amazon Prime, Hulu and Netflix. You can read reviews and the latest news on the horror genre and find obscure categories like Killer Parents, Spiders, and Urban Decay.

Filming has begun at Elvis Presley’s mansion, Graceland, in Memphis, Tenn., on a new Christmas movie for Hallmark starring country music star Kellie Pickler. “Christmas at Graceland” will feature much of the music made famous by Presley. Graceland is situated on a 14-acre complex that features not only his famous Southern mansion, but an auto museum, chapel, memorabilia collection and two of his airplanes (one of which cost $250,000 to purchase and another $750,000 to customize.) In “Christmas at Graceland” Pickler plays a high-powered executive who returns home to Memphis to secure a family-owned bank, only to be distracted by an old flame.