‘Sorry to Bother You’: The funniest movie you’ll ever see about labor organizing 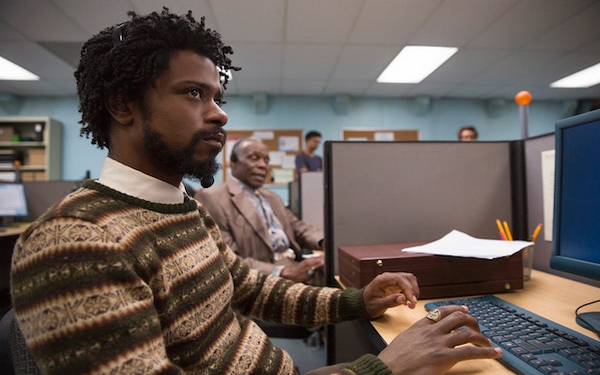 From left, Lakeith Stanfield as Cassius Green and Danny Glover as Langston star in the film, "Sorry to Bother You." (Peter Prato/Annapurna Pictures)

The pun embedded in the title of rapper-activist Boots Riley’s wacky new movie “Sorry to Bother You” is both a clue and a caution — you’re going to get a comedy about telemarketing, but also a movie with more on its agenda (labor organizing, for instance) than escapist summertime laughs.

Riley’s main character, who goes by the Dickensian name Cassius Green (“Get Out”’s Lakeith Stanfield) is one of those Americans left behind by “full employment.” He’s out of work, behind on his rent, about to evicted, along with artist girlfriend (Tessa Thompson). But he’s always hustling for a job, lands a commission-only sales position (the interview scene is a keeper) at a telemarketing firm, and immediately puts on his headset and gets to work.

It’s here that Riley gives the movie the first of its many inventive jolts. Phone conversations in movies are usually deadly, but not here — as Cassius makes his pitch, the floor collapses, and he drops into the living rooms of his customers, watching their reaction to his pitch.

That customer reaction, by the way, is not good. He gets a lot of hang-ups. A veteran coworker (Danny Glover) gives him advice: Use your “white voice,” and in another of Riley’s experimental flourishes, he supplants the voices Stanfield and Glover with the piped-in voices of comedians Patton Oswalt and David Cross.

Of all the nutty ideas (and there are millions) in Riley’s movie, this was my least favorite. For one thing, you can hear Oswalt and Cross trying to add extra scoops of nerdy vanilla to their vocals, which actually complicates and weakens the joke. For another, we’re deprived of the fun of Glover and Stanfield acting this — playing around with intonations and inflections, arriving at something nonthreatening and bland enough (à la Dave Chappelle) to sell encyclopedias and to Middle America.

In any event, once he’s mastered the voice, Cassius starts moving merchandise, and gets the call to go “upstairs,” where a golden elevator takes super-callers to an elite sales team, where Cassius is celebrated, validated, and compensated. His coworkers (Steven Yuen) downstairs are not so lucky. They’ve decided to organize and unionize, and Cassius finds himself caught between solidarity and prosperity.

The movie is wildly uneven but lively and timely — in its own surreal way (nods to “Idiocracy” and “The Island of Dr. Moreau”), it stands as one of the few Hollywood movies to show an awareness of chronic low-wage pressures in our full-employment economy. It takes aim the gig-economy disrupters (the film’s resident oligarch and villain, played archly by Armie Hammer, is named Lift), but it’s by no means a lecture or a polemic. The movie has smarter-than-usual critiques of corporate imperatives (the more Wall Street learns about Lift’s depraved and exploitative labor schemes, the more the stock goes up), and just enough crazy jokes to sustain it.

‘SORRY TO BOTHER YOU’