Top 7 places to visit in Taiwan 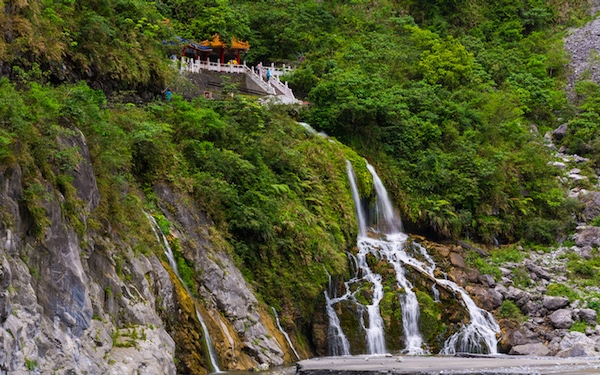 Taroko National Park is the main draw for many travelers visiting Taiwan. (Dreamstime)

Taiwan is often overshadowed by other East Asian destinations, like South Korea and Japan, but the Ilha Formosa (or beautiful island, a name given by Portuguese sailors when they first spotted the destination) delivers stunning nature, dynamic cities and delicious street food that will make you wonder why it’s still flying under the radar. The ruggedly beautiful mountains, river gorges, rice fields and hot springs make it a nature lover’s paradise, while Taiwan’s urban centers host a range of unique festivals and cultural attractions, creating a well-rounded destination for all types of travelers. Read on to find out where you should travel in Taiwan.

Taroko National Park is the main draw for many travelers visiting Taiwan. Its magnificent landscapes are the result of millions of years of erosion from powerful typhoons and volcanic activity. The sizable park covers 463 square miles of rugged terrain, from sea level to 12,000 foot peaks. The rushing Liwu River bisects the mountains, forging striking ravines along the way. The most iconic stretch of the river is known as the Taroko Gorge, which runs approximately 12 miles near the coastline. Modern engineering has made visiting the marble canyon much simpler and safer (roads are carved into the rock face along the canyon’s edge). Earthquakes aren’t uncommon, so mind the guardrails and signs, as they’re there to be keep visitors safe from falling rocks.

To really experience the park’s beauty, make your way from the main road to one of the many hiking and walking trails. Continue on the entry road and you’ll find a suspension bridge used by the Taroko people to transport supplies up to their villages. Conquer your fear of heights and walk to the middle of the bridge for a bird’s-eye view of the raging waters below. More rigorous walking and trekking opportunities abound, with plenty of ridges to get the adrenaline pumping. To escape the crowds and enjoy solitude amidst the raw natural beauty, head to the challenging Zhuilu Old Trail. Another option: Book an overnight trek with Hualien Outdoors, which includes a homestay with an indigenous family atop a ridge with clear views of the surrounding peaks and valleys.

Most visitors choose to base themselves in nearby Hualien, a quietly charming city located less than an hour from Taroko.

Taipei, Taiwan’s under-hyped capital, is the main entry point for international visitors. It’s a foodie’s paradise, with dozens of night markets and roadside eateries preparing everything from street snacks to table-top hot pot. Taiwan’s cuisine possesses numerous regional specialties, and Taipei is the best place to sample many of them in one location. Head to Shilin Night Market to dine like the locals. This massive indoor food court houses over 500 stalls and draws thousands to feast on oyster omelets, dim sum and stinky tofu. (Stinky tofu is far more innocuous than it sounds — the dish is typically deep-fried with pickled vegetables or cooked in a pot of broth.) Other options include Gongguan Night Market, which sees a younger student crowd, and Huaxi Street Night Market for more adventurous dishes, like snake soup. Another Taipei food trend worth checking out: shrimping restaurants, where you’ll catch your own crustaceans for a well-earned meal.

Aside from the delectable cuisine, Taipei is home to gigantic monuments and world-class museums. Art buffs will want to check out the National Palace Museum, which boasts the world’s premier collection of Chinese antiquities, and the Fine Arts Museum, which showcases contemporary masterpieces. A less obvious museum choice is the Beitou Hot Spring Museum, which pays tribute to Taiwan’s first public bathhouse (which is still running adjacent to the museum). Taiwan’s volcanic activity has created numerous hot springs throughout the region, though this urban bath has the added advantage of metro access.

When it comes to Taipei’s nightlife, the downtown area near City Hall is home to many of Taipei’s upbeat clubs, while Anhe Road is lined with lively bars. To party like the Taiwanese, karaoke is a must. Private rooms are soundproofed and come with phones to order beer and food. Taipei’s LGBTQ scene is also one of the most prominent in East Asia. Head to the Red House district, near the Ximen metro stop. Here, you’ll find over 25 gay bars, ranging from casual karaoke joints to leather and fetish spots.

Serving as the capital during imperial rule, Tainan is Taiwan’s oldest city. Despite rampant modernization across Taiwan, Tainan’s Anping District has retained much of its historic character, especially in the eastern section, which features traditional architecture and narrow alleyways reminiscent of the 17th century. Few buildings can be found over six stories. Nearby Fort Zeelandia has been restored to its original prominence under Dutch colonial rule. The complex was built in the 1600s by the Dutch East India Company, and now provides superb views over the low-rise skyline extending from Tainan’s historic center. Another can’t-miss attraction is the Anping Tree House, which functioned as a salt warehouse before being abandoned and reclaimed by massive banyan trees. Heading inland from Anping, Tainan’s central districts offer a mix of old and new. The colorful and ornate Grand Mazu Temple was the former palace of the last king of the Ming dynasty. To get a sense of modern Taiwanese culture, head to Blueprint Culture & Creative Park. This former prison dorm now features a mix of eclectic boutiques, art studios, and galleries.

Tainan has been dubbed the City of Snacks, which is no surprise, given that it possesses over two dozen night markets. The choices are bountiful, but a local specialty worth seeking out is coffin bread — fried toast packed with various combinations of ingredients, like shrimp and pineapple or chicken and vegetables. Like many other urban night markets, expect oyster omelets, fried eel, squid and dim sum.

Another major urban center, Kaohsiung lies on Taiwan’s southwestern shores. This industrial port city has made substantial strides in developing a more cosmopolitan atmosphere, with street-side cafes, public transport, and pedestrian-oriented planning. As with other destinations on this list, a trip to the night market is the best way to get a feel for the cuisine and culture here. Check out Ruifeng and Xin Jue Jiang night markets to dine on hot pot and other traditional dishes. Cijin Island is another great stop on the Taiwanese food trail. Its bustling fish markets and local seafood restaurants prepare the freshest catch right off the boat. Though the island is now connected by an underground metro, we recommend making the trip by ferry at least one way for excellent views of downtown Kaohsiung. For an even better vantage point, head to Cijin Island’s northern tip and climb up to Cihou Fort. For a glimpse at the local art and cultural scene, take the light rail out to Pier-2 Art Center. Formerly a train station and warehouse, it now features a sculpture garden, indoor galleries, entertainment venues, and boutiques.

Taiwan’s second-largest city is situated on the western side of central Taiwan. Although Taichung doesn’t have the same scale of cosmopolitan amenities as Taipei, it does have a well-organized museum row and an array of night markets in close proximity to mountain getaways. A corridor of greenery, known as the Parkway, connects the National Taiwan Museum of Fine Arts and the National Museum of Natural Science. A wonderful botanical garden, where locals practice tai chi in the early morning, lies behind the latter. (It’s free to join.) Top night markets include the Chung Hwa and Feng-Chia. East Asia is hardly associated with wine, but Taichung is home to the Taichung Winery, which has been operating since Japanese rule. Once you’ve explored Taichung’s parks, museums, and tasty eateries, consider taking a day trip to Sun Moon Lake, Taiwan’s largest body of water. A favorite getaway for the Taiwanese, the beautiful, placid lake is only enhanced by encircling mountains.

Lush Taitung feels far removed from Taipei and the densely populated western half of Taiwan. Located on the southeastern coast between mountains and the sea, Taitung sees annual typhoons, making it sparsely populated compared to the urban west coast. Those visiting in July will have the chance to witness Makapahay, which celebrates the millet harvest with traditional dances and customs, though there is some variation across different groups. Taitung has its fair share of night markets, too. The most memorable dish you’ll find is pig’s blood jelly soup, which is made from blood clots and pickled veggies. Folks can also head north to Dulan, a small town that has become renowned for surfing. A handful of surf shops offer lessons for all skill levels. In town, the Dulan Sugar Factory is a unique venue that exhibits an eclectic mix of cultural performances and art installations, as well as houses a local brewery and other craft vendors.

Ideal for nature lovers, Green Island is home to the Zhaori Saltwater Hot Springs, which attract both locals and tourists. After soaking in the seaside hot springs, check out the island’s stunning coastline and interior. Traveling the entire coastal road takes approximately 30 minutes, but plan for plenty of stops to enjoy the empty beaches. The coastline is ringed by coral reefs, though there are just three designated snorkeling areas. It’s best to stick to these spots as strong tides and sharp coral elsewhere can be dangerous.

Those looking to get off the beaten path should head to tiny Orchid Island. There isn’t a whole lot to do here besides admiring the natural beauty and getting to know the local Tao culture (outsiders refer to the group as Yami). Visitors can choose between a handful of homestays and locally owned accommodations — both ideal for sampling traditional cuisine and getting a glimpse of the local culture. Orchid Island can only be reached by flight or ferry from Taitung, and due to Taiwan’s less-than-predictable weather, it’s best to allocate a few extra days in case of any cancellations.