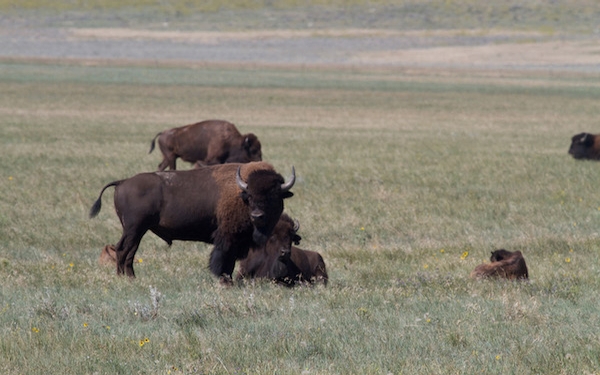 American bison graze with their young near Antelope Creek. Recovering wild bison herds to their native habitat is a key initiative of the American Prairie Reserve. (Andrew Evans/Chicago Tribune/TNS)

Bison run faster than humans, I thought on my morning jog, as I panted down the slope.

They weigh more too — around 1,400 pounds. One of those beasts could crush me flat and not even notice.

I ran a little distance before looking back at the low ridge, where 50 or 60 bison posed like breathing statues, the morning sun lighting up the smoky exhale of their nostrils. The massive animals showed less interest in me than in the dewy grass around them, but they had surely seen me running, just a few hundred yards away, with nothing between us but the wild, uninterrupted prairie.

There was no shortcut back to camp — no easy way around the herd of buffalo. I would have to wait for them to finish grazing and move onward. I continued my run, leaving the faded trail and plodding across the undefined landscape of dirt, sage and scrub. My eyes watched the busy ground, flexing with ant highways and beetles, jumpy locusts and white butterflies. As I ran, I could only hear my shoes slapping the earth and the squeaky whistle of an unseen western meadowlark. In every direction, the horizon was wonderfully empty.

It’s not easy reaching the middle of nowhere. We flew from Chicago to Bozeman, Mont., and drove six hours into the infinite grasslands of north-central Montana. Phillips County is one of the least densely populated counties in the U.S., with less than one human per square mile. Our paved road ended in the gold-mining outpost of Zortman, where we turned westward, into the glowing green heart of the reserve. Like so much of Montana, the unbound sky was bold and giant, rolling with storms, then cast with sunbeams and blue. Flippant Americans call this flyover country, but it looks more like America than anywhere else I know — the America of the Sioux and Assiniboine, of Lewis and Clark and Norwegian homesteaders, and the America of virgin prairie and healthy wildlife.

Few places remain where you can witness American bison roaming fenceless in their native habitat. Yellowstone National Park is such a destination, with over 4 million visitors a year and bumper-to-bison traffic through summer. The American Prairie Reserve is a lesser-known site, a bit more off-the-beaten path, but utterly immense in its scope and vision.

Like a pioneer patchwork quilt, this nature reserve-in-progress is stitched together from public and private lands, linking the Upper Missouri River Breaks National Monument and Charles M. Russell National Wildlife Refuge and expanding their reach with Bureau of Land Management claims and purchased ranches that culminate in the largest protected fence-free prairie in the world.

Returning cultivated land to wilderness is a labor of love that is more often legal and financial than physical. Pulling down rusty barbed-wire fences is the easy part — the less glamorous side of prairie conservation involves raising lots of money, purchasing strategic properties, retiring cattle leases, getting local buy-in and navigating the multilayered bureaucracy around land use in the no-longer Wild West.

I had come late to the party — more than a decade after the first land purchase for the American Prairie Reserve. I had arrived in Montana well after the bison herds were re-established, representing the closest living gene pool to those bison that once swarmed the plains before westward expansion. On that first morning, I had encountered them on my run. The bisons’ disregard of me is a sign of conservation success. The half-dozen caramel-colored calves hovering behind their mothers would never know a fence in their lifetime, I hoped.

I waited for the herd to move on before running back to camp, thrilled by my spontaneous interlude with America’s iconic land mammal. After a breakfast of iron skillet pancakes and campfire bacon, we ventured out in search of another animal herd, albeit smaller and subterranean. Most ranchers and farmers view prairie dogs as pests that dig holes where cattle can fall and break legs, yet these remarkable rodents are essential to the ecosystem. Convincing cattlemen not to shoot or flood or poison a prairie dog colony is part of the long conservation battle and fundamental mission of the American Prairie Reserve.

To quietly observe a wild prairie dog colony is extraordinary — a few slow minutes pass until a tiny furry head pops up from the ground, cautious and alert. Suddenly, I was surrounded on every side by high-pitched chirping.

This is not a zoo or some special-access zone of nature — it is simply the American prairie as it was meant to be: unfettered, unbothered, open, free and flourishing. I watched the real-life nature show of prairie dogs minus any cutesy voiceover or jarring commercial breaks. The fact that more Americans know the prairie from the TV than from this beautiful moment is precisely why we need the American Prairie Reserve.

My travels have taken me to Botswana to track lions and central India in search of tigers. I’ve witnessed the safari industry in full swing, as Americans suit up in khaki and fly to Africa in search of true wilderness.

But we have all that right here. The American prairie is our Serengeti — our own savannah coming back to life. Why chase the exotic ideal of an African safari when you can drive or walk right into America’s own true wilderness?

That so much springs from so little is the miracle of this windswept place, where the symphony of living creatures never stops. There were lone coyotes and leaping pronghorn that flew across the land as the plains became sandstone bluffs that dropped into deep gorges of the curvy Missouri River. At night, there were stars — unbelievable stars and the brilliant Milky Way.

We stayed three nights out there. I quickly lost count of the buffalo and stopped checking my phone for reception. I began listening to the wind in the grass. And I finally let go, running on the plain, dipping my toes in the summer river, closing my eyes against the sun, and touching the strong and infinite nature of my own country.

(Andrew Evans is a freelance writer.)

The American Prairie Reserve welcomes visitors year-round. Tent sites and RV hookups are available at Buffalo Camp for a minimal charge, and camping on public lands is permitted. For those who don’t want to rough it, the reserve’s Kestrel Camp offers five climate-controlled yurts with expert-led tours and gourmet dining for around $1,000 a person per night.