New drama Puzzle has charm, but leaves more curiosity in its wake 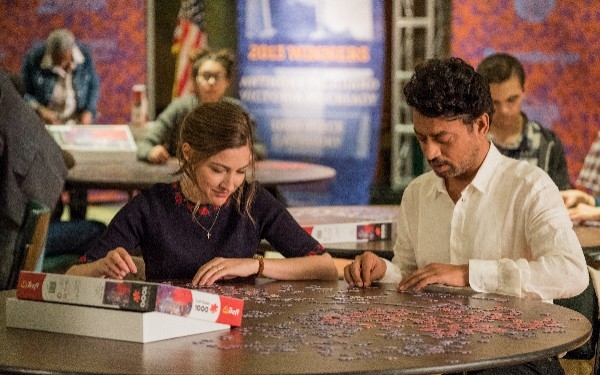 One of the simple pleasures in film is a simply surprising opening scene. Whether it startles, stirs, or pivots you into rethinking the whole concept of what you’ve gotten yourself into, this first moment is integral to your understanding of this new world. Long-time producer Marc Turtletaub’s directorial debut Puzzle, delivers one of these wonderfully quiet, melancholic, and yet warm opening sequence that stirred curiosity in me as a viewer. It was a recognizable discomfort, a homey awkwardness that I don’t even want to go into detail so you can relish it as well. I want you to relish it because it’s great, and I also want you to relish it for the unfortunate fact that it may be the film’s high point. And I don’t want to give that up.

Anyone familiar with the work of Scottish actress Kelly Macdonald (Trainspotting, No Country for Old Men) will know that she has a wild scope of talent that makes everything just a tad more… other. She’s odd. Even in dramas like No Country for Old Men it seems like she knows something that everyone else doesn’t, smirking underneath her hard stare. For that singular reason, she was a perfect casting choice for Puzzle’s leading lady.

Based on the Argentinian film, Rompecabezas, Puzzle follows Agnes, a 40-something housewife who has settled into her role as churchgoer and homemaker and has lost most sense of independence and identity. This doesn’t exactly bother her, in fact the routine of having dinner ready right at 5PM and cleaning up after everyone gives her a sense of place, but it’s when a friend gives her jigsaw puzzle for her birthday--and completes it obsessively over and over again for days in increasingly fast times--that she realizes that maybe there is something strangely special about her.

And strange is the operative word here, as Agnes has a very hard time connecting with people around her, even with her husband Louie (David Denman, The Office) and her two teenage sons. So, it’s just as surprising to her as it is to us that she ventures all the way to a jigsaw puzzle store in Manhattan and responds to an ad looking for a jigsaw puzzle partner. This is, unfortunately, where Puzzle starts to lose its stronghold.

When Agnes meets with her new partner, an inventor named Robbie (Irrfan Khan, Slumdog Millionaire), the story shifts into a new mode. Part love story, part coming-of-middle-age tale, the heart of Puzzle’s narrative focuses on the pair discovering how to work most efficiently with each other. Naturally, Agnes acts cold and closed-off at first, despite Robbie’s pestering questions. This is where Macdonald shines. It’s when she starts to give in to the flirtation, seeing the charm of speaking candidly with another person, that the script loses it’s punch.

For example, both Agnes and Robbie touch on their respective immigrant stories, and yet, the scene seems to glide by without any grip. These huge qualities of her character that enrich and enliven her story get sprinkled here and there, but are never truly explored. The same goes for her increasing confidence towards her family, who she is finally able to stand up to. These moments are so big for Agnes and yet, they seem without clarity. I find myself thinking of films like Billy Elliott, where the titular character also finds himself in a curious case of unexpected genius despite the outside world wanting something else from him. There is curiosity in Billy’s journey that takes all of us on a curious path with him. With Puzzle, it feels we only get to see the surface of things.

While this is his directorial debut, perhaps there is an expectation from Turtletaub to make films as emotionally profound as the ones he produced (e.g. Little Miss Sunshine and Away We Go). Certainly, Puzzle has important moments that reflect on the quiet isolation of a mother and wife and the breaking of that suffocating mold, but ultimately I believe it doesn’t dive deep enough. Melodrama isn’t necessary to find the heart of something, but with a little bit more inquisitive poking and prodding, Puzzle could have more to say in the end.