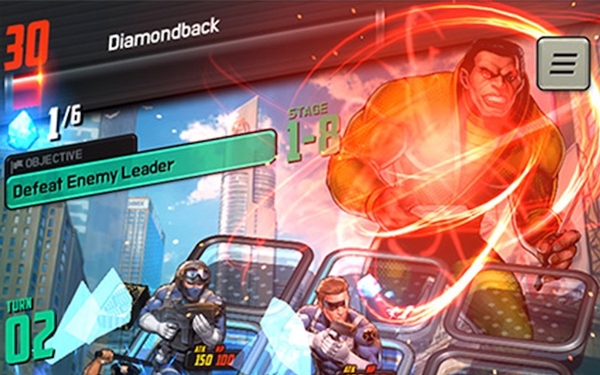 Players have to build a deck of 12 cards to compete in "Marvel Battle Lines" matches. (Nexon)

A Marvel trading card game isn’t new. Upper Deck manufactured the “Super Hero Squad Card Game” that was supposed to be a fast and simple game for kids. Konami produced a more complex title called “The Marvel Trading Card Game” originally for the Nintendo DS and PlayStation Portable. None of them saw explosive success on par with “Magic: The Gathering.”

A lot has changed since the release of those two games. “Hearthstone” has rewritten what a collectible trading card game could be by leveraging the power of video games and the internet. Meanwhile, Marvel has undergone a metamorphosis, becoming one of the most popular franchises in the world.

Given those facts, now seems like a good time to give another shot at the card game genre with “Marvel Battle Lines.” Developed by Nexon, the game is built for iOS and Android devices and features a fresh take on the digital card game.

It starts with a single-player campaign written by veteran comic book writer Alex Irvine. It’s beautifully illustrated and focused on a battle over a Cosmic Cube, a powerful artifact a step below the Infinity Gauntlet. During a battle between Captain America and Red Skull, the Cube shatteres with the pieces falling on Earth.

It’s there that players choose a male or female avatar and battle adversaries for pieces of the Cube, using a library of nearly 200 cards. With a deep well of lore, that number will undoubtedly go up with new heroes, villains and items. Interestingly enough though the game’s mechanics tie in strongly with the story.

Instead of a large deck and a bifurcated board, players have to deal 12 cards and a three-by-four grid. The smaller deck is supposed to make the game simpler while the unusual playing field adds positional strategy to the gameplay.

The only requirement for the 12-card deck is that players need three 0-cost cards. These are characters that can be played without Cosmic Fragments, which are Cube pieces that appear on the board and the equivalent to mana in “Hearthstone.” To claim them, players must place a card in the space. That’s why it’s important to mulligan and have at least one 0-cost card in a four-card hand. Another important category to have is an action card, which deals direct damage to foes. This are the only card type that is disposable. All other cards are recycled back into the deck.

Each turn consists of one move. Players can play a character card, move or attack with a character on the board, use an action card or mulligan up to four cards. The goal of the game is to lower the health points of an opponent’s deck leader. To do that, players must get four cards lined up in a row either horizontally, vertically, diagonally or in an L shape. This battle line adds up the character cards’ attack and uses it to damage the face of an opponent.

The element creates a Tic-Tac-Toe dynamic, in which players fight for position on the board by blocking an opponent’s attempt to create a battle line while also setting up their own line. It adds a different strategy and makes action cards important because they could open up a crucial space by killing a foe or free up space so that players can grab some.

In addition, as the game goes on, more Cosmic Fragments end up on the board and that allows players to use some of their stronger cards. For example, Iron Man who deals damage to enemies on the board when played has a cost of 2 because of its stats and effects.

Lastly, Deck Leaders are cards that have their own bonuses. For example, Black Widow adds 40 to 60 HP to 0-cost character cards making them more durable. This would work in a deck with a lot of low-cost cards aimed at rushing the board and dealing damage quickly. On the other hand, deck leader Iron Man increases value of Cosmic Fragments on the grid by 1. He appears built for more of a long-term game.

In terms of deck building, this sets up an aggro vs. control dynamic and helps guide the process of deciding what to include. With 12 cards, the space is limited and every draw should have a purpose so they can maximize the Cosmic Fragments, which are capped at 6. Thankfully, the pieces carry over each turn.

At the moment, there isn’t much else in terms of card actions. Player cards in general can attack any square around them including diagonally. During the assault, a card’s attack is measured against an opponent’s health and whoever is left has diminished HP but the same attack. The loser is eliminated and returns to the deck to be reused again.

“Marvel Battle Lines” has a single-player campaign, a player vs. player mode that includes ranked play, a player vs. enemy mode and a player vs. enemy puzzle option. In addition, players have a chance to join a Guild where they can share strategies and trade cards. A guild is limited to 20 people and trades have some restrictions.

The cards themselves are purchased via packs. The packs can be bought via gold, which is the earned in-game currency, and gems, which are the premium currency that players pay for.

From what I’ve seen, the game is in its early stages and the developers at Nexon are still figuring out how to give credit for destroying cards for scraps and using those parts to create more valuable characters. There is a leveling system that powers up cards. It requires several copies of the same card and some gold. On top of that, other systems are in the works. What I really want to see is some type of synergy between character families. It would add an incentive to create decks based around Guardians of the Galaxy with Star Lord, Rocket Raccoon, Groot, Drax, and Gamora. It would also introduce an incentive to complete certain team sets and add to the lore.

Again, the game is still being worked out, so fans can expect some changes as “Marvel Battle Lines” evolves.