What you should know about Neapolitan pizza 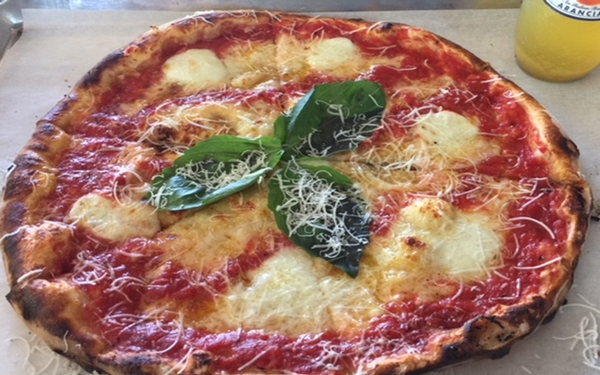 Neapolitan and American pizzas are so different, it’s like comparing filet mignon to hamburger: Same animal, different planets. Great Neapolitan isn’t about the toppings, it’s about the crust.

That gets push-back from some customers, says Grant Arons of Inizio Pizza Napoletano in Charlotte, N.C.

“People come in with a predefined notion — ‘I know good pizza, this doesn’t look like that.’ For a lot of folks, it’s a game-changing experience. It’s almost like a different meal.”

To experience that difference, you used to have to travel: Great Neapolitan pizza was something you found in southern Italy, specifically Naples, and maybe a few Italian-owned pizzerias in New York that used coal-fired ovens to replicate the high heat of a wood-fired oven.

“No matter what looks tasty, I have to get a Margherita because that’s how you’re going to find out about their dough,” says Arons. “Because that’s everything.”

Let’s consider what makes Neapolitan so different. If you want to know more, there is a worldwide certification organization, www.pizzanapoletana.org

Language. American pizza has “bones,” those curves of crust you toss aside while you fill up on sausage and pepperoni. Neapolitan pizza has cornicione, the puffy, raised edge that a pizza connoisseur would never leave on the plate.

Flour. Neapolitan is made with lower-gluten flour, preferably a finely milled Italian brand such as Caputo, and just a little yeast. The dough is soft and usually made in advance, so it develops more flavor from fermentation. Some fans think the softer crust is easier to digest than chewy American pizzas made with higher-protein flours.

Ovens. Neapolitan is cooked in wood-burning ovens that go to at least 900 degrees or higher, so the pizza cooks in minutes. The soft dough hitting the hot oven makes the edge puff up.

Charring. If an American pizza showed up with blackened spots, you’d hit Yelp and howl. If a Neapolitan pizza shows up with black freckles — called leoparding in pizza parlance — and big, browned bubbles, that’s exactly what you want. Peyton Smith of Mission Pizza Napoletano in Winston-Salem, N.C., a self-proclaimed “pizza geek,” says charring is “essential to round out the entire pizza.” The dark spots are a little bitter, offsetting the sweetness of the sauce, milky fresh mozzarella and basil.

Sauce. It’s simply canned tomatoes, crushed by hand or in a food mill, with a little salt. The oven is so hot that cooked sauce would overcook and reduce too much, getting too thick and sweet.

Cheese. Expect simple white circles of fresh mozzarella, preferably bufala di mozzarella, made from water buffalo milk. In America, some Neapolitan makers put a layer of drier part-skim mozzarella or Italian scamorza under the sauce, creating a barrier that keeps the soft middle section from losing crispness too quickly. (Some Neapolitan purists frown on that, saying it adds too much fat and richness. And the center is supposed to be a little soupy.)

Foldability. Skip the knife and fork: The soft crust and tender center means you can fold each slice. In Naples, pizza can be street food, something you eat while you walk, although it’s served in sit-down restaurant too.

Size: Neapolitan pizzas are meant to be individual servings, usually only 12 inches across.

Don’t get it to go. Neapolitan is meant to be eaten immediately, as soon as it comes out of the oven. If it sits, the thin center gets too soggy. “The thing about Neapolitan is you have to get to eating,” says Peyton Smith. “Your salad will wait but your pizza won’t.”