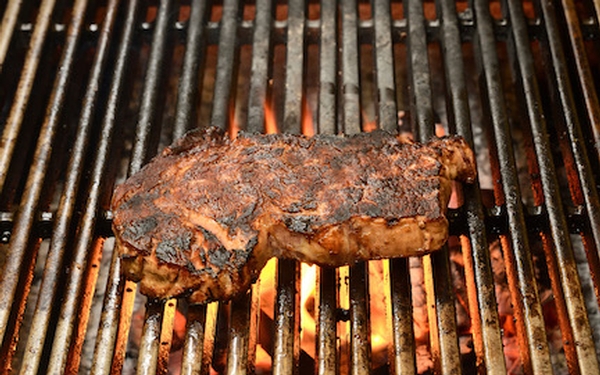 Hamburgers, hot dogs and chicken are fine in their way, but when it comes time for grilling, only one meat is king: steak.

But steak can be intimidating. So we have compiled a primer about steak, the basic information you need to grill a steak to perfection.

David Marren, executive chef of the Ruth’s Chris Steak House in Clayton, Mo., said that steak is prized most for two attributes: How tender it is, and how much fat it has. In steak, fat is a good thing. “Most of the flavor comes from the fat,” he said.

Perhaps the most famous cut of steak, the tenderloin or filet mignon is also the most tender. “If they’re tender enough, you can almost cut them with a fork,” said Steve Waack, managing partner of the LongHorn Steak house in St. Peters.

The meat is so soft because it comes from a part of the cow, just below the backbone, that does not get much work. It is also particularly lean, so it does not get the benefit (as well as the calories) that comes from fat. Extra flavor often comes from a strip of bacon wrapped around it, or a sauce.

In contrast, the ribeye is prized because it has so much fat — and therefore so much flavor. Cut from a little-worked muscle just outside the rib cage, it too, is quite tender.

The tenderness also comes from the little seams of fat that run through the meat, which is called marbling. Because no one likes to eat undercooked fat, many experts recommend ordering a ribeye at least medium rare or warmer.

If steak is the king of the grill, then porterhouse is the king of steak. It’s two cuts in one, a strip steak on one side of a t-shaped bone and a tenderloin on the other. The bone is important because it imparts even more flavor to the meat on both sides.

Porterhouses are large — by definition, the tenderloin part has to measure at least 1 1/4 inches across. The smaller version of a porterhouse is the familiar T-bone, which just has more of a hint of a tenderloin. It is the same cut as the porterhouse, but it comes from the part of the loin that is closer to the animal’s head, where the tenderloin is more narrow.

The cut on the other side of the T-bone, the New York strip, which is also just called the strip steak, has seen a recent surge in popularity because it provided a hearty beefiness and a satisfyingly dense chew with a relatively low cost.

Sirloin “comes from the very top of the cow, it’s right by the rump,” Marren said. It is less tender than other steaks without being tough, and, almost by way of compensation, “it has more of a robust flavor,” Waack said.

Even with the big, beefy taste, it often remains the least expensive steak.

Flank steak and skirt steak are from two different parts of the cow, but most cooks think of them interchangeably. Both are especially good when marinated, both should be cooked over high heat for a short period of time and both are very tough; the only way to make them reasonably tender is to cut them in thin slices against the grain of the meat.

“You’ve got to know how to cut on the bias. That’s the most important part of it,” Marren said.

The United States Department of Agriculture inspects and grades the vast majority of beef sold in this country, about 96 percent of it. Grocery stores, butchers and restaurants are not required to say what grade meat they are selling, but many do.

Prime beef “is the Mercedes of the beef,” Marren said. Only 2 percent of beef is graded prime, and most of that goes to high-end restaurants. It comes from young — and therefore tender — cattle that have been well fed. The meat will have abundant marbling, giving it extra texture and tenderness.

Choice beef is also high-quality meat, though less marbled and less tender than prime. Choice steaks are great for high-heat cooking, but, according to Marren, “when you get to the other parts, like the rump and the round, it dries out quickly and it’s easy to overcook.”

Select is lean and still relatively tender, but it will be less juicy than the higher grades of meat.

There are lower grades of beef, too. Standard and commercial grades are sometimes sold as a store’s own brand, but the packaging will probably never acknowledge these lower, undesirable grades. Below commercial are utility, cutter and canner grades, which basically never make it to a store’s meat department except as ground beef.

Dog food has to come from somewhere.

Your grill won’t do that. Waack suggests using a grill at between 500 and 550 degrees; Marren says to cook at least 450 degrees. “If you can’t put your hand over it for 1 second, that’s hot enough,” Marren said.

“Don’t be shy about putting on the seasoning,” Waack said. Both chefs recommended using plenty of salt, plus pepper and garlic, either granulated (Waack) or fresh (Marren). Marren suggests salting the meat as much as a full day before cooking, to bring the juice to the edges of the meat where it will contribute to a great crust when seared.

The grill should be clean and lightly oiled before starting. Marren likes to prepare the grill with one side extra-hot for searing, a hot section next to that for cooking and a warm portion next to that where the meat can rest and redistribute its juices after it is cooked.

But remember, the meat will continue to cook once it is off the grill. According to Marren, “it will rise about 5 to 7 degrees, so always go a little bit undercooked.”