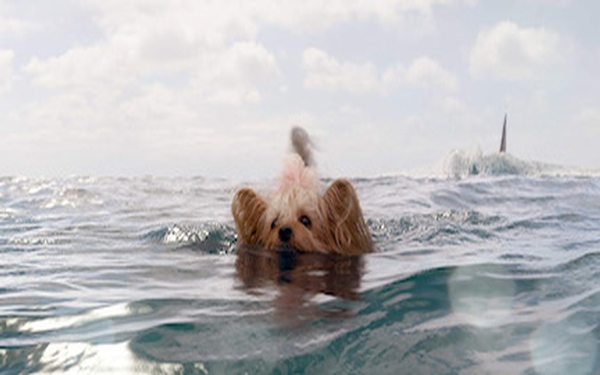 A scene from "The Meg." (Warner Bros. Pictures)

As a filmmaker, Jon Turteltaub has always prided himself on his versatility, and over the years he has tackled everything from romantic comedies (“While You Were Sleeping”) to family films (“The Kid”) to action blockbusters (“National Treasure”) to a movie about the 1988 Jamaican Olympic bobsled team (“Cool Runnings”).

Still, when he was approached in 2016 with the idea of directing “The Meg,” a film about a rampaging prehistoric giant shark, Turteltaub wasn’t sure he wanted to bite.

“My agent sent me the script and said, ‘Read this. Go make it. It’s terrific,’” Turteltaub recalled one recent morning. “I said, ‘Yeah, but it’s just a big shark movie.’ He said, ‘Yeah, exactly.’”

From a studio’s standpoint, a giant-shark movie may seem the ultimate no-brainer: “Jaws” on steroids. But, based on the 1997 Steven Alten bestseller “Meg: A Novel of Deep Terror,” “The Meg” — which reached theaters Friday and boasts an international cast including Jason Statham, Rainn Wilson and Li Bingbing — had been in development for nearly two decades by the time it reached Turteltaub.

After early efforts to make “The Meg” at Disney petered out, the project eventually moved to Warner Bros. In 2015, it was announced that horror maven Eli Roth was attached to direct the film. But within a year, Roth had dropped out.

Despite the shark’s long-held status as one of Hollywood’s favorite go-to movie monsters, for a time it seemed no one was sure quite how to crack “The Meg.”

The deeper Turteltaub dug into the idea, though, the more enthusiastic he became. In the story of a group of scientists and deep-sea divers who discover — and inadvertently unleash — a 75-foot megalodon living deep in the ocean, he saw the potential for a crowd-pleasing summer popcorn film that could blend action, spectacle, suspense and comedy.

The key was to nail the right tone, one carefully modulated between the deadly serious thrills and chills of Steven Spielberg’s seminal 1975 classic “Jaws” and the winking, decidedly unserious fun of, say, “Sharknado,” the 2013 Syfy channel B-movie about a freak cyclone that scoops up great white sharks and deposits them on Los Angeles. (A sixth installment in the “Sharknado” series, incidentally, is set to air Aug. 19.)

Getting that balance right, Turteltaub knew, would be no easy feat.

“Boy, it was a narrow target to hit,” he said. “Frankly, I don’t know that everybody working on the movie had that tone in their head, but I did. I always felt that if we simply made an awesome giant-shark movie, audiences would say, ‘There’s no need to go see that.’

Hollywood’s long love affair with the shark stretches back, of course, to “Jaws,” which single-handedly invented the modern summer blockbuster as we know it. The seventh-highest-grossing film of all time at the domestic box office, adjusting for inflation, “Jaws” went on to spawn three sequels and numerous other shark-centric movies on the big and small screen, ranging from straightforward thrillers (“Open Water,” “The Shallows”) to unapologetically ludicrous romps (“Sharktopus”).

In reality, unprovoked shark attacks are quite rare — on average, there are roughly 80 worldwide a year, most of them nonfatal. Statistically, you are far more likely to be killed by a fireworks accident, train crash or lightning strike than by a shark.

Still, as the team behind “The Meg” was well aware, the primal terror of a real-life monster that strikes without warning from the unseen depths (with an assist from composer John Williams’ menacing “Jaws” theme) continues to exert a razor-toothed hold on the moviegoer’s imagination.

“God bless ‘Jaws’ for starting the genre because audiences enjoyed that fear, and people have tried to go into that territory since,” Di Bonaventura said. “It’s tricky territory, though, because, you know, there are a ton of really bad ones. My attitude with ‘The Meg’ was, if you’re going to make a giant-shark movie, you’d better not take yourself too seriously.”

Indeed, from the outset, Turteltaub said, he was determined not to overthink things.

“Before we started, I said, ‘Great literature usually has something like a giant shark representing in an allegorical way some part of the human psyche that needs to be battled. Can we please just make a shark movie in which the shark is just a big … shark?’” He laughed. “Everybody gave me a big thumbs-up and said, ‘Please!’”

“It’s an interesting balance that Jon needed to walk as a director,” said Wilson, who plays an eccentric, undersea-exploration-funding billionaire who serves as a kind of comic foil to Statham’s intrepid deep-sea-rescue expert. “The movie can’t take itself too seriously because ultimately it’s just about a giant shark, but at the same time it can’t poke fun too much because then it becomes ‘Sharknado.’

“To find that tone, you underline the comedy a little bit more and keep it a little more fresh and fun and loose,” Wilson continued. “I feel like so many of these films are just incredible action sequences interspersed with grim people mumbling.”

Even as he leaned into the pure escapism, Tur-teltaub also set out to ground “The Meg” in some genuine hard science regarding what is known — and as yet undiscovered — about both the deep ocean and the megalodon, which has been extinct for more than 2 million years.

“I had a very nice phone call with a marine paleontologist where, when he was done laughing at the idea, he gave me some very helpful notes,” the director said dryly, adding that he’s hoping the film’s scientific extrapolations pass muster with the experts. “It only takes one with a Twitter account.”

To mitigate some of the risks involved in mounting “The Meg,” which has a production budget of $130 million, the film’s backers teamed with the Chinese film company Gravity Pictures, making the movie just the latest in a growing line of such co-productions as studios look to tap into the growing might of the Asian market.

“The partnership brought funding, but, much more, they had valuable insight for the synergistic development with characters and story line to ensure Chinese interest,” said producer Belle Avery. “They also understood that we needed an international cast and that it must appeal to a global audience to ensure global box office success.”

In addition to casting actors like Li and Winston Chao, who are well known to Chinese audiences, the filmmakers set the climactic sequence — in which the megalodon threatens a beach packed with thousands of swimmers — on China’s island province of Hainan. (The rest of the movie was shot in New Zealand, much of it against a green screen on a specially constructed, soccer-field-size water tank.)

Leaving aside global box office considerations, from a creative standpoint, the beach resorts of Hainan — known as “the Hawaii of China” — seemed tailor-made for the film.

“I went online to look up Chinese beaches, and you see images of thousands of people in inner tubes smushed together,” said Turteltaub. “You look at that and think, ‘God, that looks delicious if you’re a shark.’ We started with about 5,000 extras, but I don’t know how many made it to Day 2.”

Clearly, making “The Meg” has given Turteltaub a healthy respect for the challenges of pulling off a giant-shark movie. But beyond that, the director said, he also came away with a new appreciation for sharks themselves.

“I made a point of learning about them and not being one of those hysterical people,” Turteltaub said. “I was with my kids in the ocean in Malibu, standing near the shore when we saw dozens of sand sharks swimming all around our feet. Because of what we learned, we stood there and let them swim around us rather than panic.

“It was actually really cool.”

He paused, then added, deadpan: “And my kid isn’t even upset about his eight toes.”