Nicki Minaj still cares about the old way of doing things. Does anybody else? 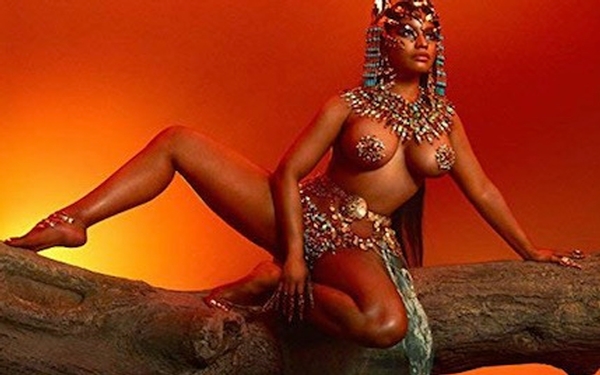 That’s the prime takeaway (whether or not she intended it to be) from “Queen,” on which the most commercially successful female rapper in history spends so much time describing her dominance that a clear conclusion is that she fears it’s beginning to erode.

And why wouldn’t she?

Always a fast-moving genre, hip-hop has only sped up its evolutionary pace in the four years since Minaj’s last album, “The Pinkprint.” In 2014, few at rap’s center were worried about competing with Post Malone; fewer still identified Cardi B as a legitimate threat.

Now, of course, the latter is as big as they come, with a hit debut and a streaming-and-radio smash in “I Like It” that many view as the song of the summer.

“Took a little break, but I’m back to me,” Minaj raps on her new album’s “LLC,” before taking what appears to be a shot at Cardi B, whose ascent as a woman with a microphone has been compared countless times to Minaj’s: “Trying to make a new Nicki with a factory / They’ll never toe to toe on a track with me.”

But it’s not just the names that have changed in hip-hop; so too have the routes to success. And on “Queen,” Minaj, 35, continues to put her faith in the old way of doing things — even if listeners, as she surely knows, couldn’t care less about some of them.

“I ain’t ever have to strip to get the pole position,” she insists in the throbbing “Hard White,” which is almost certainly a reference to Cardi B’s much-discussed (if little-disparaged) past as an exotic dancer. Elsewhere, in the opening “Ganja Burns,” she tsk-tsks the emerging generation behind her for assuming they’ve matched the talented veterans, including Jay-Z and DMX, with whom she obviously sympathizes.

“You gotta have real skill, gotta work for that / If it’s really passion, would you give your world for that?” she asks the youngsters. “Unlike a lot of these ho’s, whether wack or lit / At least I can say I wrote every rap I spit.”

The fuddy-duddy stance — thou shalt rise from the streets and compose by hand with paper and pen — feels bitterly defensive, even when Minaj lives up to her boasts about her hard-won craft, which on “Queen” is almost all the time.

In the sly “Barbie Dreams,” built on a funky guitar lick familiar from its appearance decades ago in a song by the Notorious B.I.G., she cleverly (and unprintably) flips the earlier track’s conceit to make fun of Drake and 50 Cent, among other male rap stars.

And she sounds as fierce as she has in years on “Coco Chanel,” which closes the album with a spray of furious dancehall beats and a thoroughly imposing cameo from Foxy Brown. (On Saturday, hours after “Queen” came out, Minaj teamed with yet another relatively aged New Yorker to release “Sorry,” a duet with Nas that reportedly didn’t make the album thanks to an unauthorized Tracy Chapman sample.)

What’s strange about Minaj’s preoccupation with these outmoded values is that it hasn’t squelched — or been squelched by — her forward-looking instinct.

More than any other rapper at her level, she’s at ease shifting between rap and pop; for her, it’s never been a sacrifice of her credibility to sing airy melodies over sleek electronic grooves, as indeed she does here in “Nip Tuck,” about a protracted breakup, and the disarmingly tender “Come See About Me,” in which she pleads with an ex to reconsider their relationship.

Minaj’s willingness to switch styles (and her ability to follow through on it) is the thing likely to keep her on top as hip-hop keeps advancing.

On “Queen,” though, all the back-in-my-day stuff suggests a lack of confidence in her unique perspective. Ditto several recent missteps, including a widely publicized dust-up after a fan gently criticized her on Twitter and her baffling decision to collaborate with the 22-year-old Soundcloud-rap star 6ix9ine, who pleaded guilty in 2015 to using a child in a sexual performance.

Much of what endangers Minaj’s supremacy she can’t help. But some of it she can.