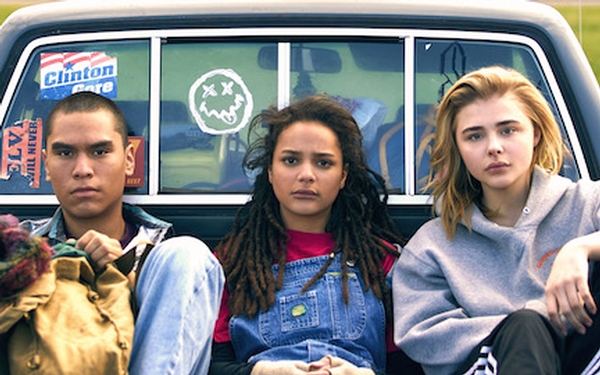 “The Miseducation of Cameron Post,” the Sundance Grand Jury Prize winner about teens enduring a gay conversion therapy boarding school, opens with a pastor warning adolescents that they’re at an age where they’re especially vulnerable to evil.

“What feels like fun is actually the enemy closing the noose around you,” he cautions.

Given this setup and the subject matter, you might expect the remainder of the movie to be fueled by anger, biting humor and an outright contempt for religion. But Desiree Akhavan’s film, which she and producer Cecilia Frugiuele adapted from Emily M. Danforth’s young adult novel, is something else entirely — a sincere, gentle coming-of-age story about first love, friendship and, yes, hope.

At Sundance, Akhavan introduced the movie saying she hoped to make a queer John Hughes comedy. On that count, she most certainly succeeded.

Cameron (Chloë Grace Moretz) is enrolled in God’s Promise, after being caught making out with her girlfriend Coley (Quinn Shephard) in the backseat during prom, an event they attended, of course, with straight dates. God’s Promise is a boarding school in the remote woods run by Dr. Lydia Marsh (Jennifer Ehle) and her brother, Reverend Rick (John Gallagher Jr.). Cameron is to “get better” and lose her gayness through prayer and therapy. Reverend Rick says it worked for him, something he relates as he cheerfully confiscates Cameron’s Breeders cassette upon check-in. (It’s 1993, by the way.)

Cameron is a work in progress (“I don’t think of myself as anything,” she says at one point), but she is pretty confident that her SSA (the code everyone at God’s Promise uses for “same sex attraction”) is authentic. (She can’t help but laugh when a boy looks her over during group therapy and labels her a lesbian.) She’s not confused at all and gravitates toward Jane (Sasha Lane) and Adam (Forrest Goodluck), sensing kindred spirits who don’t want to be “cured” and see through the insidious lies the center is peddling.

The camaraderie among these three friends forms the heart of the film, which gracefully reveals its characters’ histories and feelings of self-doubt.

Moritz, Lane and the brilliantly deadpan Goodluck bring an appealing mix of adolescent sarcasm and aching vulnerability to their roles. Emily Skeggs is another standout, playing Erin, Cameron’s cheerful and extremely conflicted roommate.

Adam describes his relationship with Dr. Marsh as akin to “having your own Disney villain … “ But there’s nothing cartoonish about Ehle’s empathetic portrayal of this woman who’s certain that she’s protecting these teens and saving them from making a bad choice. The wreckage is inevitable, and it’s all the more powerful because of the subtlety Akhavan employs in showing Marsh’s professed benevolence.

“How is programming people to hate themselves not emotional abuse?” Cameron asks late in the movie. The question just hangs there, the answer obvious. And yet the practice continues. “The Miseducation of Cameron Post” offers a powerful rejoinder to anyone who’d shame people into denying their authentic selves. In its own modest way, it’s one of the year’s bravest films.