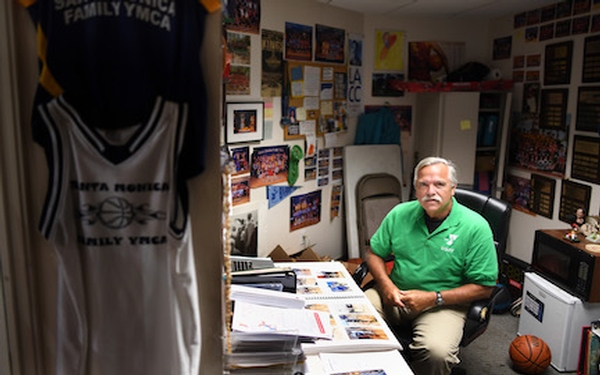 Longtime USC announcer Peter Arbogast sits in his office at the Santa Monica YMCA ,where he is a youth sports coodinator, on Wednesday, Aug. 8, 2018. (Wally SKalij/Los Angeles Times/TNS)

Marcia Kislinger was dying, taking her last breaths, but her family wasn’t there yet. They had just been notified.

They were rushing from their homes to her bedside at Providence St. John’s Health Center in Santa Monica. They were worried they wouldn’t arrive in time, and the 63-year-old woman would die alone.

As they raced into her room, they suddenly stopped, struck with the oddest of sights. She had company.

Sitting at her bedside was a stranger with a walrus mustache and the touch of a feather. He was stroking her hand and whispering into her ear. She was not responding. He continued speaking.

The family stared at each other in wonder.

“We were all like, ‘Who is this man?’” recalled Eddie Kislinger, Marcia’s brother. “He was a total stranger, yet he was so calm, so kind, there was something angelic about him.”

When the man stood up, he addressed the family in oddly familiar baritone tones. He was wearing a one-word name tag:

Later, outside the room, Kislinger asked Peter if he knew his sister. He did not. He asked Peter if talking to dying patients was his vocation. He replied that, no, it was not.

Actually, Peter said, he has this other job where he talks to hundreds of thousands of Angelenos under far different circumstances.

“That’s when it hit me,” Kislinger said. “I realized that the voice comforting my sister in her final hours was the voice of USC football.”

Arbogast, 63, is a volunteer in the Providence St. John’s No One Dies Alone program, a nationwide service that offers companionship to dying patients.

If a terminally ill patient’s family is not immediately available, or if they have no family, Arbogast is one of about 50 volunteers who might be summoned to their bedside. He spends as many as four hours comforting them.

He sits at their shoulders, believing they can still hear. He lightly strokes their arms or pats their backs, hoping they can still feel. He has a voice that has famously boomed throughout Southern California for 23 years of Saturdays, yet he lowers it to a calming hush.

“It’s like I’m just a guide from one place to the next,” Arbogast said. “I’m just there to help you out, to make sure you’re OK on your journey.”

Often, Arbogast reads words of inspiration culled from books he collects for these occasions, from the works of writers such as Henry Van Dyke and Howard A. Walter.

“Things a man must learn to do, if he would make his record true … to love his fellow men sincerely, to act from honest motives purely.

During his 10 visits in the last several years, no patient has died while Arbogast was in the room. Some have died shortly after he left. He sometimes walks away feeling depleted, as if he had just left the Coliseum after calling a USC game against Notre Dame.

“Sometimes I feel like I’ve just finished a broadcast, I’m so emotionally exhausted,” Arbogast said. “But it’s not about me. It’s not for me. The fact is, no one should die alone. That would be horrible. This is for them. Even if they don’t know we’re there, we’re there.”

That has been a mantra for Arbogast’s life, one that could be in the brightest spotlight but does its best work in the shadows.

Arbogast has been the radio announcer for more USC football games than anybody, passing the great Tom Kelly after Kelly began splitting his time between television and radio.

He is a broadcasting icon whose full-time job is not in broadcasting. He is the director of youth sports for the Santa Monica YMCA. When he’s not providing the soundtrack for USC football games — for which he is paid on a per-game basis — he runs recreation basketball leagues and chaperones kids at summer camps.

“I remember telling my dad about this, and he’s like, ‘Wait, Pete Arbogast works for you?’” said Erika Alsthule, the YMCA’s youth and family department director. “I am very surprised he would do this, but he’s always giving back to the community. People around here know him for that.”

Arbogast has always worked at local YMCAs — nearly a dozen — because he grew up around the Hollywood YMCA and saw how the experience could change people. He was molded by the city — John Marshall High, Los Angeles Community College, USC — and wants to pay it forward.

Arbogast has to be the only Southern California broadcaster who also occasionally does public-address announcements for football games at his former high school, and referees YMCA youth games when nobody else is available.

The other night, he even threw out the first pitch at a Little League playoff game, which perfectly illustrates a low-key lifestyle that includes living in a small, rented Venice apartment with his wife, Jenny, and driving a Pontiac Vibe with 220,000 miles on it.

“I’ve always been lucky in having my dream USC job, but never been lucky in money. I never really had any,” he said. “But I’m OK. I’m good. I wake up happy, and that’s all that matters. When I’m done, I’m going to look up and say that was all great stuff.”

Great stuff but tough stuff, this part of his life that involves waiting for the death of strangers. Arbogast became a volunteer after answering an ad in The Santa Monica Daily Press. He would still be serving anonymously if not for an email from Eddie Kislinger, who thought his family’s surprise should be shared.

“He’s not Pete the USC guy, he’s just a gentle, compassionate giant named Peter,” said Erin Pickerel, a volunteer coordinator at Providence St. John’s. “He brings this calmness, this assurance. You can feel his presence.”

Pickerel once walked into a room where Arbogast was talking softly to a patient while lightly holding his hand. She remembers his words exactly, the words of a football announcer calling a play that carries a soul.