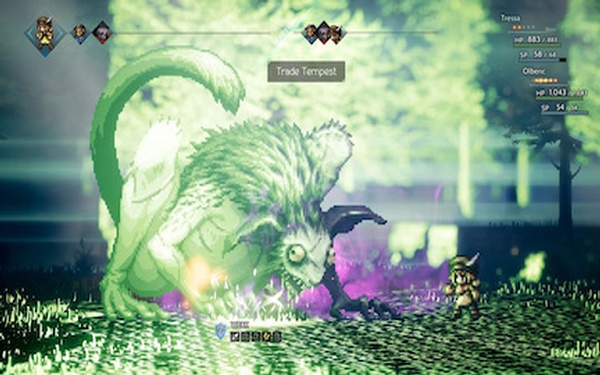 At first glance, “Octopath Traveler” could be mistaken for a Super Nintendo title. The sprite-based characters look like they’re straight out of “Final Fantasy VI.” (Nintendo of America)

Japanese role-playing games have strived to give players bigger and more bombastic experiences. Epic cutscenes rival anything this side of a Peter Jackson movie. Dazzling visuals showcase the latest hardware that make fantasies look like reality.

But for all the effort to give fans a grand adventure, crucial elements of the genre were lost along the way — compelling characters and daring storytelling. Those have always been part of the cornerstone of JRPGs, the magic sauce that keeps players going for one more battle and makes the grind of leveling up rewarding.

Although that seems like a lost art, there’s occasionally a game that hits that mark. The latest to do so is “Octopath Traveler.” Square Enix made this JRPG anomaly in partnership with Acquire, a video game studio better known for its ninja-centric “Tenchu” series.

At first glance, “Octopath Traveler” could be mistaken for an Super Nintendo title. The sprite-based characters look like they’re straight out of “Final Fantasy VI.” The two-dimensional world appears flat, but closer inspection reveals modern touches. The landscape is partly made of polygons and the fixed camera shows a world with depth as objects in the foreground and background blur and sharpen as players move through it.

Completing the unique style is an Instagram-like filter that encircles the periphery and gives “Octopath Traveler” the hazy look of a memory. It’s a faux-retro approach that evokes nostalgia while also hinting at cutting-edge design.

The other unusual component of this JRPG is the structure. As the name implies, there are eight heroes and players choose one to be the main character. From there, they are free to explore the world and meet up with the other protagonists. It gives players a tremendous amount of freedom as they gather allies in any order they wish though each character’s story arc remains the same.

What’s intriguing is that the narratives are diverse and distinct. Primrose, a dancer, focuses on revenge and makes for one of the darker, more memorable plots. On the other hand, Cyrus’ narrative plays out like a detective story as he investigates a mysterious lost book. Alfyn’s path is introspective as it examines his job as a traveling apothecary and the harsh lessons of being a responsible medicine man.

None of the heroes are saving the world epic fashion and that’s a good thing. The developers offer a change of pace by telling personal stories that make the characters more multidimensional compared to other bland protagonists.

After gathering each hero and exploring the map, players will have to travel to the far reaches of the world. Although players can technically go wherever they want, “Octopath Traveler” blocks progress artificially by filling some regions with tough monsters. To access these zones or even finish some heroes’ plotlines, players will need to grind out levels and pick up stronger gear.

Thankfully, “Octopath Traveler’s” combat is deep enough that battles are less redundant and addictively strategic. In a way, it’s almost like a puzzle. Enemies have certain weaknesses that players must exploit. Doing so lowers the shield points and when that rating hits zero, they are stunned and open to more damage.

To help obliterate those shield points, heroes have a trait called Boost Points that go up each turn. The resource lets players attack more than once or it powers up an attack. Knowing when to activate Boost Points is key to beating some of the tougher bosses in the game.

The last element is the character classes and jobs. Each hero has a special innate ability. H’aanit, the hunter, can capture beasts and use them in battle while Therion is a thief who can open locked chests. Some traits help solve side quests while others make the difference in combat. In addition to the primary jobs, the characters also have the option to get a secondary job by visiting special shrines. These roles open up stat boosts, different weapons and perks, making heroes more effective and versatile in combat. The customization will keep fans busy as they find the optimal group to power through the campaign.

All of this makes “Octopath Traveler” a surprisingly robust JRPG. The developers deftly mix old-school concepts and modern sensibilities to create a project that’s refreshingly new and one of the better adventures this year.

4 stars out of four