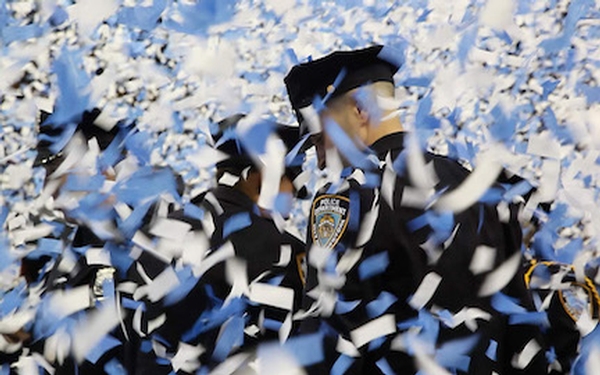 “Crime + Punishment” is a quiet documentary but a potent one. Though its approach is low key, its passion, drama and concern for exposing wrongdoing is unmistakable.

Directed by Stephen Maing, who also did his own cinematography over the picture’s four-year span, “Crime” is impressive enough to have won a special jury award for impact at Sundance earlier this year.

Although its subject is the NYPD12, a group of whistle-blowing New York City police officers who risk their careers to help fight what they say is an ongoing department policy of quotas for arrests and tickets, “Crime” manages to both broaden the focus to society in general and offer personal, human glimpses of the people involved.

That’s because all those hundreds of days Maing put in resulted in an unmistakable bond between subject and filmmaker that led the film’s participants to reveal themselves to the camera, to be candid about their hopes and their fears.

Though many recent documentaries have shown police in an unflattering light, “Crime + Punishment” introduces us to the opposite side of the coin, to idealistic officers who want to do the right thing, who genuinely joined the force to protect and serve.

What we see is how that idealism plays out in the real world, what it can accomplish and what it may not be able to achieve, the way heroic individuals determined to be the best they can be cope with a reality that can be indifferent if not unforgiving.

“Crime + Punishment” starts with a telephone conversation between 12-year NYPD veteran Sandy Gonzales and the director, in which the patrolman says that retaliation for his refusal to write tickets to order is coming. Maing asks if he can clandestinely film it, and the game is afoot.

What we see and hear in secretly recorded audio is Gonzales exiled from his patrol car and detailed to stand on a street corner because he’s “got to catch up” to those who are writing more tickets. Not to mention being unreasonably busted by a superior for “being out of uniform.”

Also introduced early is burly private investigator Manuel Gomez, himself a former cop, who is hired by Pedro Martinez, a young resident of the East Bronx incarcerated on Rikers Island who says the weapons charges he’s being held on are false.

Gomez, a no-nonsense type who flatly tells Martinez, “Do not waste your family’s money if you are not innocent,” painstakingly investigates not only those weapons charges but also why a young man like Martinez had been arrested eight times previously and had each arrest dismissed for lack of probable cause.

The culprit is inescapably those unofficial but very real arrest and ticket quotas that, “Crime + Punishment” underscores, are a key source of revenue for the city — running to the tens of millions of dollars annually.

Gomez’s investigation is expertly interwoven (the director and Eric Daniel Metzgar did the editing) with the experiences of Gonzales and fed-up fellow officers who are dubbed the NYPD12 by the media when they risk their careers by filing a class action lawsuit against the city to protest the quotas.

Several members of the group are singled out for attention, including single mother Felicia Whitely, who worries about being put on the midnight shift as retaliation, and Edwin Raymond, an exemplary officer who scored high on the sergeant’s exam but has not been promoted because his arrest/ticket numbers are too low.

Despite all it is doing, “Crime + Punishment” also finds space to work in the arrest and death of Eric Garner and spends time following the city’s police commissioner, William Bratton, who talks grandly about “integrity” and insists that this kind of quota system does not exist. Whether he is genuinely in the dark or not is for those who watch this important and timely film to decide.