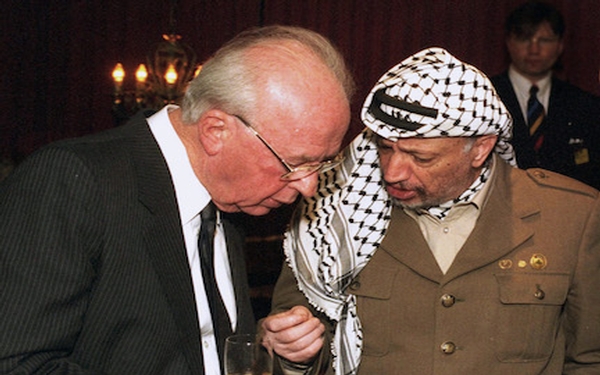 1992. Israeli-Palestinian relations are at all time low. In an attempt to stop the bloodshed, a small group of Israelis & Palestinians meet in Oslo a secretly and against the law.

Israeli journalist Amos Elon once wrote that the demands for justice presented by the Israeli-Palestinian impasse exceed the human capacity to administer it. The dramatic, involving “The Oslo Diaries” details the closest these adversaries have come to proving Elon wrong, a story that is heartening and heartbreaking by turn.

Co-directed by Israelis Mor Loushy and Daniel Sivan, the documentary employs a variety of techniques to provide an intimate, inside look at the nearly three-year process that resulted in what have come to be known as the Oslo accords.

Using excerpts from unpublished diaries read by actors, previously unseen footage, discreet re-creations and present-day interviews with key subjects, including the last on-camera conversation by former Israeli President Shimon Peres, “Oslo” reveals how the accords happened, what their success felt like, and how and why it all fell apart.

When things began in 1992, relations between the two antagonists were at such a low point that Israeli law specifically forbade contact with the Palestinians.

In fact, when Yossi Beilin, the deputy minister of foreign affairs, recruited two college professors, Yair Hirschfeld and Ron Pundak, for these back-channel negotiations, he specifically told them, “if you get caught you will be charged with treason and espionage and I cannot protect you.”

There were psychological obstacles to success as well as legal ones, with the two Israelis looking on the PLO representatives as terrorists and the trio of PLO members seeing the Israelis as criminal occupiers.

In fact, the talks at a remote villa near the Norwegian capital nearly collapsed before they began, with the PLO comparing the Israelis to Hitler and both wrestling with the feeling that they could not negotiate with representatives of an entity they felt had done so much harm.

But as the meetings continued over time, the negotiators began to see each other in human not ideological terms, a dynamic that survived the addition of new Israeli team members like Uri Savir, the eventual chief negotiator, and tough lawyer Joel Singer.

A key moment was the mutual decision to focus on an agenda for the future and never argue about what had happened in the past.

That was joined to a mutual recognition of the other side’s scars and deep-seated fears. The Palestinians, for instance, came to understand that no matter how powerful Israel was, the country labored psychologically under an existential threat to its survival.

“The Oslo Diaries” also conveys a good sense of how confusing and complicated negotiations were, with the Israelis griping that the PLO “never missed an opportunity to miss an opportunity” and both sides fearing that news of their talks would fatally leak to the press before an agreement could be reached.

That did not happen, and “Oslo” includes anecdotes about the official Washington, D.C., signing ceremony, with then-President Bill Clinton stage-managing the celebrated handshake between PLO Chairman Yasser Arafat and Israeli Prime Minister Yitzhak Rabin to make sure it happened.

Though everyone looks delighted in news footage of that 1993 event, seen today that happiness looks terribly sad because we know where this story is going.

For those who don’t, “Oslo” briskly recaps what happened next between the two sides: a violent tit for tat punctuated by an increasingly corrosive political debate between the left and the right within Israel, culminating in the murder of Rabin by a right-wing terrorist and the election of rightist candidate Benjamin Netanyahu as Rabin’s successor.

As to the future, “The Oslo Diaries” offers a variety of perspectives. While one participant says “an opportunity like this comes once in a hundred years and it was wasted,” another insists “the ending of our story has not yet been written.” We shall see.